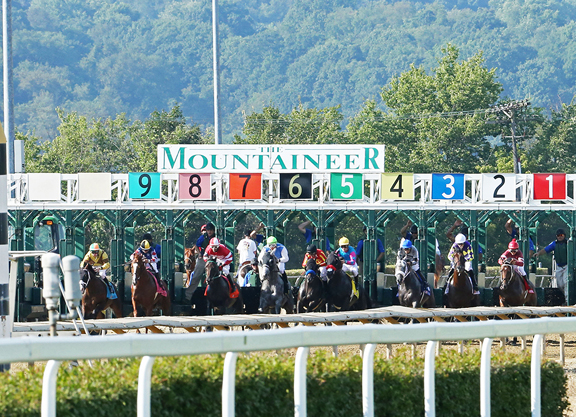 Acting on a whistleblower tip from People for the Ethical Treatment of Animals (PETA) that included two graphic photographs, the Hancock County Sheriff's Department in West Virginia on Wednesday began investigating a case involving a horse carcass found dumped at a landfill near Mountaineer Racetrack & Resort on Sep. 27 that is alleged to be a Thoroughbred that suffered a racing injury there two days earlier. PETA alleged in a letter written to the sheriff that the horse is Bridget Moloney (Pollard's Vision), an 8-year-old mare who, according to Equibase, “took a bad step in upper stretch” and was vanned off after beating only one horse in a starter/optional claiming turf route in the second race at Mountaineer Sep. 25. Owner Vickie L. Stewart and trainer Loren Craig Cox are listed as Bridget Moloney's connections for that race.

PETA said in its letter that even though a visitor to the Brooke County Landfill (20 miles south of the track) was not permitted to enter the property to check the deceased horse's lip tattoo number, photographs allegedly taken at the scene match face markings (white blaze on a chestnut) and bandages (four white ones with red stripes) that Bridget Moloney was wearing when she previously raced.

“She was found where?” an incredulous Cox asked TDN late Wednesday afternoon when a reporter called to get his side of the story.

After hearing the landfill allegations repeated several times, Cox said he had no idea how his horse might have ended up there, although he acknowledged that Bridget Moloney was euthanized on the Mountaineer property the same evening she was injured. He also said he was unaware that any sort of sheriff's investigation was underway.

“She was put down that night,” Cox said. “I think they put her down on the racetrack, but I'm not positive. I wasn't there that night, so I can't tell you exactly what happened.”

When asked if he knew how the mare was disposed of after euthanization, Cox said he wasn't sure what Mountaineer's protocol is.

“That's up to the maintenance at the racetrack. They take care of that. It's out of our hands. That's up to Mountaineer,” Cox said.

TDN could not locate a working phone number for Stewart, the owner of Bridget Moloney.

Jim Colvin, Mountaineer's manager of racing operations, hung up the phone as soon as a TDN reporter called and identified himself on Wednesday. TDN then phoned right back, but the call went directly to voicemail, and a message left seeking comment has yet to be returned.

PETA's letter asked the sheriff's department to investigate the circumstances of the horse's death with respect to any animal cruelty laws that might have been broken. The letter further stated that “sources have told PETA that Mountaineer has a contract with the landfill to dump horses regularly in a 'livestock section.'”

“We just got this information this morning,” Watson said. “It's far from being established yet. All we have is the initial complaint right now. I can't give you anything that's going to say whether it's credible or not. [PETA] makes allegations here, and they allege different things that occurred, but they have not been corroborated.”

Asked if anyone from his department has checked the landfill yet, Watson said no.

“We haven't gone that far yet. You're talking something that occurred back in September, 16 days ago,” Watson added. “I don't know how much we're going to go digging up the landfill. That's 16 days of garbage. I don't know where we're going to go with this right now. This will be turned over to our investigators. Unfortunately, just like anything, it takes time to investigate.

“They just filed this with us today. They're off and running–and I mean PETA,” Watson said.