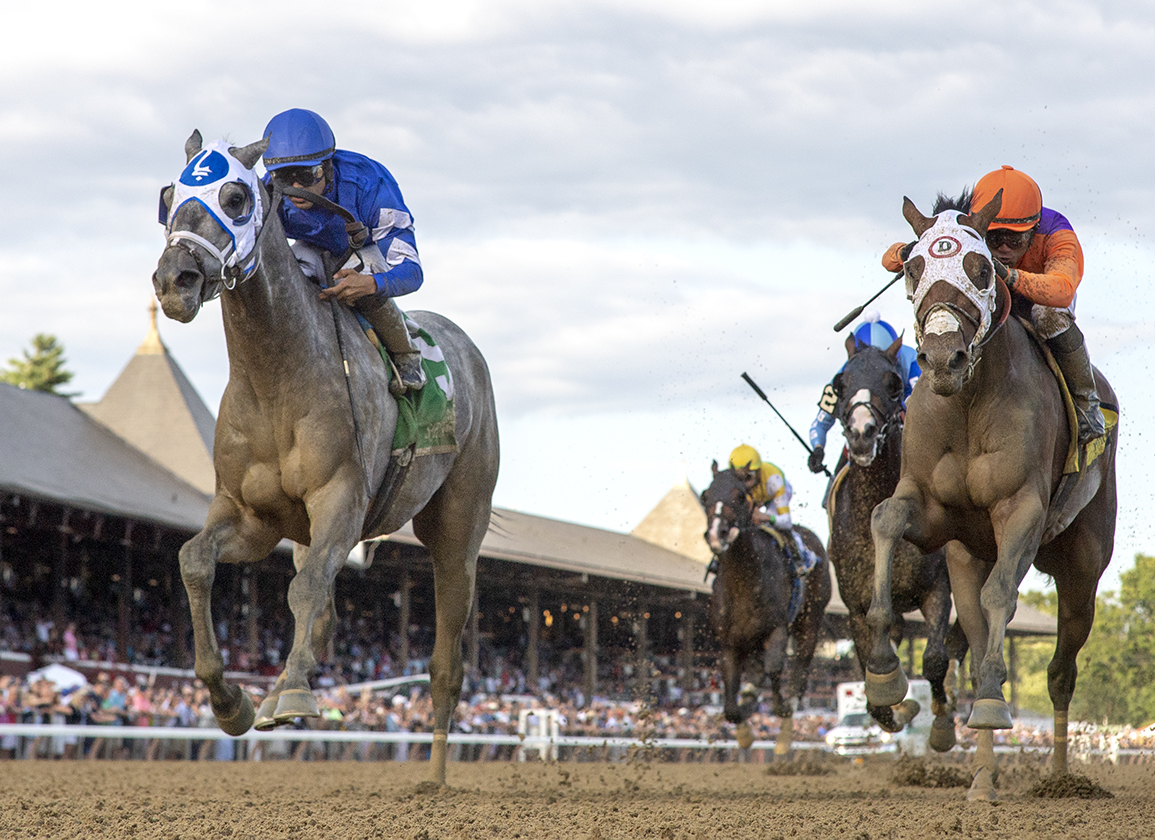 “He's sharp, mentally,” Cox said. “He's sharper this race than going into the Jim Dandy. My plan all along was to have him peak in this spot. Our goal since the Kentucky Derby was to have him at his best Travers Day and from a mental and physical standpoint, I feel he's right where we want him.

“I feel like he's as good as he's ever been,” Cox continued. “I feel like if we run our race, we'll be tough. There are six other good colts in there and we still have to play our game. If we do, I think we'll be a big factor.”

Keepmeinmind (Laoban), who came up a half-length short of Essential Quality when second in the Jim Dandy, breaks just to that colt's outside in post three and is 6-1 on the morning line. Trainer Robertino Diodoro has seen marked improvement in the colt, who is winless since taking last year's GII Kentucky Jockey Club S.

“I've emphasized this quite a bit,” Diodoro said at Wednesday's draw. “Even back in January, he's a horse that we thought would get better with time; grow into himself and be a good late 3-year-old and hopefully early 4-year-old year. He's showing signs of that. His last couple of races have been improvements and his works up here have been outstanding.”

Seventh in the GI Kentucky Derby and fourth in the GI Preakness S., Keepmeinmind was third behind Travers contender Masqueparade (Upstart) in the June 26 GIII Ohio Derby. Following that effort, Diodoro tinkered with the sophomore's training schedule.

“We just started easing off his training going into the races,” Diodoro said. “Each horse is different, and this horse is one that just puts so much into his training. On days that he's down to gallop, he goes out there and gives you 110%. He just loves his job. We eased off him going into the Jim Dandy and he was a lot sharper that day. His running was a lot sharper and he laid a lot closer.”

King Fury (Curlin), second in the Ohio Derby, moves back to the main track after a 10th-place effort in his turf debut in the Aug. 7 GI Saratoga Derby Invitational.

“In hindsight, we should have scratched [in the Saratoga Derby] because he drew the 11 [post] and he hanged wide and wider on both turns,” trainer Ken McPeek said. “I wish I could un-ring that bell, but that doesn't happen. It's a shame he didn't get to run in the Jim Dandy, but it is what it is. We think he'll perform well this weekend.”

King Fury, who drew post seven and is 15-1 on the morning line, was forced to skip the GI Kentucky Derby with a fever, but he should relish the Travers' 1 1/4-mile distance, according to McPeek.

“He's doing great,” McPeek said. “This horse is really, really a nice horse. He's been easy to be around. He's begging for a mile and a quarter. He was unlucky in the spring again because he had a fever on the day before the Derby, and we really felt like that was going to be a big day but, once again, he didn't get the opportunity. Saturday is a really big deal to make amends.”

Of King Fury's double-digit morning-line odds, McPeek added, “The odds surprised me because we ran right with Robertino's horse and Al [Stall]'s horse in the Ohio Derby [Keepmeinmind and Masqueparade]. We split those two and we really thought we could make a case that he should have won that day. He got shuffled back in the second turn and had to rally and still almost won the race. He's a good colt and he's going to make his presence felt.

“I'm not a gambler,” he continued. “The price is the price. When Golden Ticket won [the Travers], nobody paid any attention. When Sarava won [the Belmont], nobody was paying any attention. Maybe that's better. No pressure.”