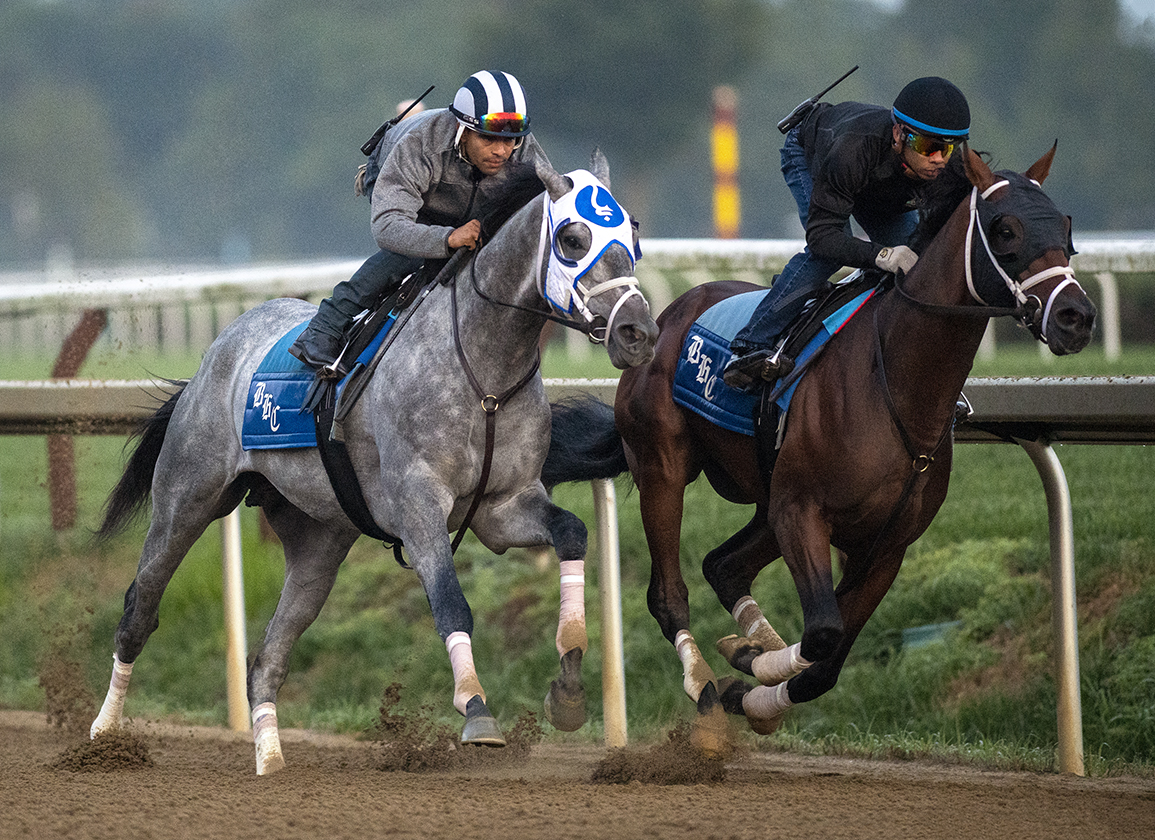 As the leader in a contentious 3-year-old division, all eyes will be on Godolphin's champion Essential Quality (Tapit) Saturday at Saratoga, but the race itself may lack for drama, as the gray lays over his five rivals in the GII Jim Dandy S., the Spa's traditional prep for the Aug. 28 GI Runhappy Travers S. Then again, stranger things have happened at the “Graveyard of Favorites”.

Sewing up his Eclipse Award as the top 2-year-old male via a three-for-three campaign that culminated with a score in the GI TVG Breeders' Cup Juvenile, the homebred made a dazzling sophomore debut when romping by 4 1/4 lengths in the sloppy-track GIII Southwest S. Feb. 27 at Oaklawn. Scoring a hard-fought neck success in the GII Toyota Blue Grass S. Apr. 3, he suffered his first defeat in finishing a sneaky-good fourth as the favorite in the GI Kentucky Derby May 1.

Passing on a quick turnaround in the GI Preakness S., Essential Quality produced easily the best race of his career when wearing down Hot Rod Charlie (Oxbow) deep in the stretch of the GI Belmont S. June 5, scoring by 1 1/4 lengths with a 109 Beyer. He stopped the timer in 2:27.11 for the 1 1/2 miles, the third-fastest Belmont clocking this century. The Brad Cox trainee has gotten acclimated to the Saratoga main track with a trio of local breezes, capped by a five-furlong move in 1:00 4/5 (4/30) July 24.

“He likes it up here big time,” Cox told the NYRA notes team. “We take him out in the afternoons when it's not raining and let him graze. He's a lawnmower. He's real focused here. He's doing well. I'm very anxious to see him race again just for the simple fact of how he's training and how he's filling out. He's a very intelligent horse. He's been wanting to do more. He came out of his last work great. He's been very sharp and his energy has been great. The cooler weather is playing a role in that. But he's ready to run. I'm very excited.”

The most likely upsetter on paper is FTGGG Racing's ascendant Masqueparade (Upstart). Bought for $180,000 at Keeneland September, the bay took four tries to earn his diploma, and only did so by way of disqualification Mar. 20 at Fair Grounds. Something clicked after that though, as he put in one of the most impressive performances of Derby weekend when crushing allowance/optional claiming foes by 11 3/4 lengths May 1 at Churchill. He proved that was no fluke when gutting out a half-length triumph in the GIII Ohio Derby last out June 26 at Thistledown.

“Our horse is on the upswing, so if he keeps improving, he could be there or thereabouts. He deserves a shot,” trainer Al Stall said. “His last two races have been very good and he handled graded competition. The numbers are fine but stepping up to those proven competitors is more a test to me than running against the clock. I think he deserves a chance.”

Chiefswood Stables' Weyburn (Pioneerof the Nile) has consistently outrun his odds and will try to do so again. A third-out graduate in the Aqueduct slop last December, he gamely prevailed by a nose at 46-1 in the GIII Gotham S. and was a solid fourth in the GII Wood Memorial S. after chasing a quick pace that otherwise fell apart. Entered against next-out GI TVG.com Haskell S. winner Mandaloun (Into Mischief) in the Pegasus S., he appeared clealry beaten by that favorite at the sixteenth pole, but refused to give in, coming back on the inside late to just miss an improbable victory by a neck.

“He still acts like he's a little confused by two-turn racing,” trainer Jimmy Jerkens said. “He breaks on his own and then gets on the bridle and then he was a little keen down the backside [in the Pegasus]. The pacesetter stopped abruptly and he ended up on the lead by himself, and he looked like he spit the bit out a little bit Mandaloun made a big, sweeping move past him and then he went after him again. He did that in the Gotham, when he lost the lead, he came back on. I guess it's like a little game with him … I think the last race did him a lot of good. His only two-turn race before that was the Wood Memorial and there was a big gap from that race. He should get better with more seasoning.”

Rounding out the field are Keepmeinmind (Laoban), third in the Ohio Derby last out, Dr Jack (Pioneerof the Nile), two-for-three with a third in the Pegasus and Risk Taking (Medaglia d'Oro), winner of the GIII Withers S. who made no impact in either the Wood Memorial or Preakness.