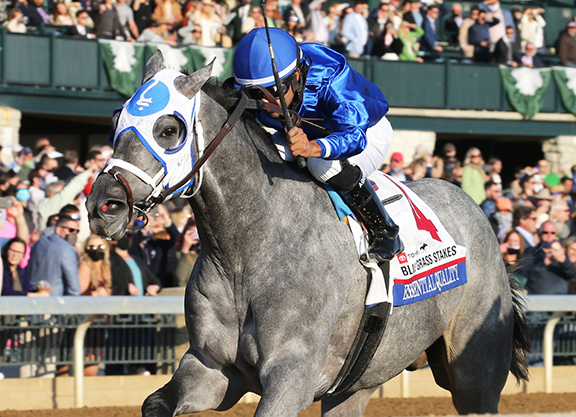 Godolphin's Essential Quality (Tapit) will break from post two and was installed as the 2-1 morning-line favorite when post positions were drawn Tuesday morning for Saturday's GI Belmont S. The Brad Cox trainee suffered the first loss of his career when fourth in the GI Kentucky Derby, but had previously been undefeated in five starts and was named last year's champion 2-year-old male.

“He ran what I thought was a winning race in the Derby; he didn't have the trip, but he showed up and he's been improving in every start,” said Cox, who will be saddling his first Belmont Stakes runner. “I'm confident that he can handle the mile and a half. Just based off his works and his races, he's very steady and doesn't seem to get tired. He has a tremendous amount of stamina that I think he was just blessed with based on his pedigree. Luis [Saez] has a ton of confidence in the colt and he's confident Essential Quality can get the distance. We're hopefully set up for a big race Saturday.”

Breaking just to the outside of the morning-line favorite in the eight-horse Belmont is John and Diane Fradkin's Rombauer (Twirling Candy). Winner of the May 15 GI Preakness S., the colt will break from post three and is 3-1 on the morning line. One stall further out in the four-hole is Derby third finisher Hot Rod Charlie (Oxbow), who was installed as the 7-2 third choice. The fourth choice at 9-2 is expected pacemaker GI Runhappy Santa Anita Derby hero Rock Your World (Candy Ride {Arg}), who drew post seven.

“In an ideal world, we wanted to be to the outside of Rock Your World since he figures to be leaving there pretty hard, but that didn't happen,” said Doug O'Neill, trainer of Hot Rod Charlie. “We're just grateful to be in the gate and to have [Flavien] Prat and to have the horse doing well … I think it's a very evenly-matched crop. You could throw a blanket over about 10 of them on any given day that could jump up and leave the group. I'm biased of course, but I think 'Charlie' is top-tier.”

Todd Pletcher will saddle three of the eight in the 1 1/2-mile Classic, with rail-drawn GII Wood Memorial S. upsetter Bourbonic (Bernardini, 15-1), GI Curlin Florida Derby scorer Known Agenda (Curlin, 6-1) in post six and Overtook (Curlin) widest out in the eight-hole at 20-1. Japanese hope France Go de Ina (Will Take Charge) is the longest shot on the morning line at 30-1 and will break from post five.

“I don't think the post positions matter so much with my three,” said Pletcher. “I think, of all the Triple Crown events, post position is least important here, especially in an eight-horse field. I was happy with all the posts. I think the real key is we need an honest pace and there are three of four horses in here who will try to be prominently placed early and if they set an honest pace, I think that will help all three of mine.”