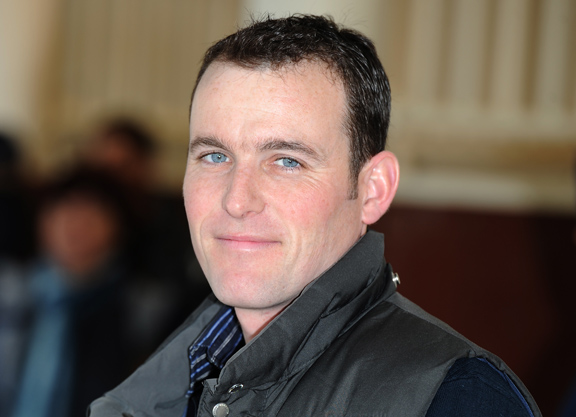 Trainers Nick Esler and Carl Allsop have launched Sandhurst Thoroughbreds in Morriston, Florida to provide breaking and lay-up services for young racehorses. The new operation will be based at Sunnyside Training Center.

The two transplanted Englishmen were road-tripping down the East Coast to Central Florida Wednesday, with Esler's wife and daughter expected to follow next week. Allsop, along with his wife, veterinarian Elizabeth Weber, are already based in Ocala.

“I've had it in the back of my mind for maybe the last 18 months now about doing this venture,” Esler, who has been based in New York for the past eight years, said. “I wasn't prepared to do it until I could do it with someone who has the same outlook on working with horses that I do.”

Esler continued, “I approached Carl about it when he first went to Ocala. He declined my offer and I didn't bring it up to him again. But he called me early in January and asked if I was still on board for doing this, and I said absolutely.”

Allsop said, “It just felt like the timing was right. The job that I was in just wasn't what I wanted and this was an opportunity to get back to working with somebody who appreciates these horses like I do.”

From a line of successful English trainers, Esler served stints as assistant to Clive Brittain in the U.K. and David Fawkes in the U.S. before going out on his own in 2012. Allsop worked with trainers Kiaran McLaughlin, Dominick Schettino, and Ralph Nicks and trained on his own for Reid Nagle's Big Lick Farm.

The two men first met when they were both work riders in Dubai in 2000, but as Allsop recalled, “I was for Shadwell and Nick was Godolphin, so we wore different silks back then.”

“It wasn't until we came to America that we became good friends,” Esler said. “We have worked alongside each other on and off for the last 15 years in America.”

Sandhurst Thoroughbreds derives its name from the British Royal Military Academy, from which Elser's father graduated.

“Sandhurst embodies excellence and produces graduates of the highest caliber,” Elser said. “We aim to deliver the same core qualities, including teaching the right fundamentals to produce leaders in the field. We chose this name to help inspire the values and standards we aspire to work to.”

Sandhurst will cater to end-users, providing young horses a strong foundation before heading to the track.

“We will be concentrating on yearlings and lay-ups for clients who go to the races and to have breaks from the racetrack,” Esler explained. “No pinhooking. We feel like that has gotten lost a little bit in the modern day with so much commercialism, pointing towards the sales. So we want to just go back to basics and teach the horses good fundamentals in a nice quiet, tranquil environment. For us, it's as much to do with their mental state, getting them prepared to be teachable. So they can go to their trainers with their mental, as well as physical, foundation in the right place to go forward and they can kick on with them. That is very important to us.”

Asked if their training philosophy traces back to their English upbringing, Esler said, “Definitely. There are 1,000 different ways to train a racehorse, no one is saying one style is better than another, but we were both brought up long-reining horses, taking the time, not rushing that process initially. You get to do the ground work in the figures of eights and teach them to bend 'round your leg, just the fundamentals of being a ridden horse. Everything else after that becomes so much easier. A big thing that we both believe, horses with confidence reach their full potential, whatever that might be, a Grade I horse or a cheaper level horse, if they have confidence, they will show you what they have.”

Of their new base, Allsop said, “Since I've been in Ocala, I've been looking around for the right spot, a quiet serene place to take in young horses, weanlings, yearlings and lay-ups and start breaking and training young horses.

He continued, “It's on a training complex called Sunnyside Training Center in Morriston. John Stephens is the owner of the property and we are leasing the main barn, which can hold 32 horses, and paddocks. And he's got all of the bells and whistles–round pens, walking machine, swimming hole, cold water spa. There is a six-furlong irrigated track. There are just four operations that use the racetrack, so it's never a mad rush out there.”

The new operation also has the luxury of an on-call vet in Weber, who has set up her own practice, Cavalier Equine Veterinary Services, in Ocala.

Asked as they drove south through Virginia Wednesday, if it was a scary time to be starting a new venture in such an uncertain environment, the two men laughed in unison.