Eskimo Kisses Runs Away with Alabama 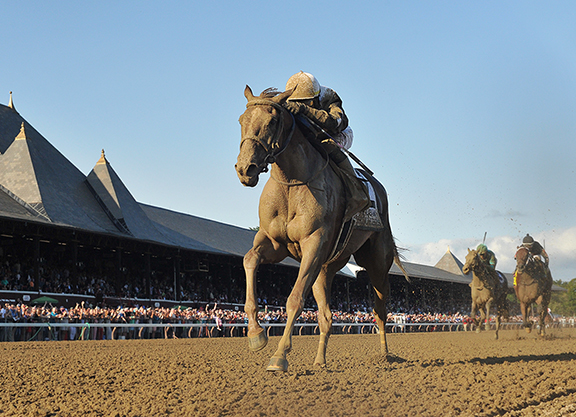 Eskimo Kisses provided her young sire To Honor and Serve with his first Grade I winner with a runaway victory in the Saratoga’s prestigious GI Alabama S. Saturday. Breaking well from the two-hole, the 9-1 shot trailed the field early as ‘TDN Rising Star’ and recent GIII Indiana Oaks winner Talk Veuve to Me (Violence) zipped through early fractions of :22.52 and :46.79 with impressive GIII Iowa Oaks victress She’s a Julie and turf stakes winner Figarella’s Queen (Medaglia d’Oro) hot on her heels. Sweeping past rivals with an eye-catching move on the backstretch run, Eskimo Kisses was guided back to the rail by Jose Ortiz turning for home, putting her right on the heels of the pacesetter at the top of the stretch. The chestnut immediately overtook Talk Veuve to Me in the lane and exploded clear to score her first graded win in style. It was a photo finish for second with She’s a Julie edging out heavily favored GII Mother Goose S. winner Midnight Bisou, who ran three wide in third last through the first half of the race and advanced just ahead of the winner on the backstretch, but could not match her explosive turn of foot in the lane.

“She’s had some races where [the pace] really didn’t set up all that well for her, but we were waiting for this race since February,” said winning conditioner Kenny McPeek. “I told Jose [Ortiz] to sit on her a certain way and we couldn’t control what fractions they gave us, we just had to hope it unfolded for us. I felt like I was a winner at the half-mile pole the way they were already backing up to her when he hadn’t moved. I’d given him instructions not to move until they straightened up, and when she split horses and he still hadn’t moved I was counting, just get to the wire.”

“Perfect trip,” said Ortiz, who also won last year’s Alabama aboard Elate (Medaglia d’Oro). “I just followed instructions and did what Kenny told me to do. Take her back, let her take me to the half-mile pole and then let her do the rest. I tried to stay inside as long as I could. She was there for me every time I asked her to move up and I’m just very happy with the way she ran today. She’s a really nice filly, she deserved it.”

As for the beaten favorite, Hall of Famer Mike Smith said, “Great trip. A mile and a quarter might be a bit too far and this is probably not her favorite racetrack. She moves over Belmont better than she moves over this track.”

Eskimo Kisses broke her maiden at fourth asking at Oaklawn Feb. 1 and returned just three weeks later to take a sloppy optional claimer there. A head second in the GII Fair Grounds Oaks Mar. 24, she was a well-beaten runner-up behind divisional leader Monomoy Girl (Tapizar) in Keeneland’s GI Ashland S. Apr. 7 and was fourth to that rival in both the May 4 GI Kentucky Oaks and the July 22 GI CCA Oaks on the Spa’s opening weekend.

Eskimo Kisses is just the second graded winner for To Honor and Serve, following recent GIII West Virginia Derby winner Mr Freeze, and is the fifth black-type scorer for the former Gainesway stallion, who was just recently sent to stand in Korea. The winner is out Gainesway-bred Silver Colors, a daughter of champion and GI Kentucky Derby heroine Winning Colors, who Gainesway purchased for $4.1 million at KEENOV. Silver Color’s first foal is the stakes-placed Silver Ride and her second foal Tapping Colors (Tapit) was purchased by Mandy Pope’s Whisper Hill Farm for $700,000 at KEESEP. The 5-year-old filly most recently finished second in a July 29 maiden special weight at Saratoga. Eskimo Kisses’ year-older half-brother Tapit High (Tapit) summoned $2.1 million at from Pope’s operation at the 2016 Keeneland September Sale and he is winless in six starts thus far. Silver Colors produced an Empire Maker colt in 2017, who is being offered as Hip 406 at the upcoming Keeneland September Sale, and a Union Rags filly Mar. 19 of this year. The 11-year-old mare was bred back to Gainesway stalwart Tapit.