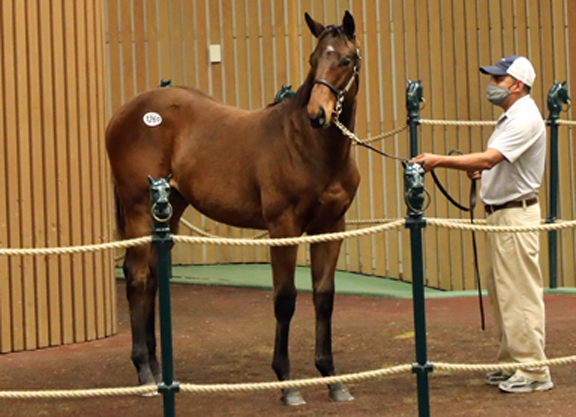 Over the past eight months, there have been very few jobs more demanding, more exhausting, more defeating, than that of an ER nurse.

Malia Hopkins can attest to that. She's the ER nurse manager for not one, but two ERs in Stuttgart, Arkansas.

It's been an unimaginable year for the well-practiced RN, but she said one event last week made the ongoing battle against the pandemic more than worth it.

In the fourth session of the Keeneland November Sale, her first-ever horse to go through a sales ring hammered down as the top-selling weanling of Book 3.

Selling as Hip 1269 with the Four Star Sales consignment, her Mendelssohn colt out of Abuntia (Olmodavor) sold for $300,000, the highest-priced weanling of the sale for the first-crop Coolmore sire.

The colt was foaled and raised at Woodstock Farm in Lexington, and while Hopkins was not able to visit him as much as she had hoped in his first few months due to the pandemic, she's been eagerly receiving photos of the youngster since day one.

“Dealing with the pandemic and managing the ERs has made for a very stressful year,” she said. “To have something like this occur 100% made my year worth it. Being with Woodstock Farm, they got that colt in shape and made him look like he was a million-dollar colt. They all went above and beyond to make this an amazing end of the year for me.”

Hopkins shares her love of horses with her mother, who is also a nurse. The mother-daughter duo were involved in the Quarter Horse breeding industry when Hopkins was a child. But at the age of 21, a car crash left her unable to ride and they were forced to dissolve their business.

Just a few years ago, they decided to venture into the Thoroughbred industry. Hopkins said it took some time to find a few broodmares that piqued her interest, but one in particular caught her eye.

Abuntia came from the family of several notable winners. She was a half-sister to multiple graded stakes winner St. Joe Bay (Saint Anddan), and her third dam was three-time Eclipse winner and Grade I producer Susan's Girl (Quadrangle).

The only catch was her spotty produce record.

Her first foal in 2015, a filly by Regal Ransom, sold for $1,000 at the OBS Winter Mixed Sale and never saw the racetrack. Then over the next two years, the mare couldn't get in foal.

“[The sellers] told us that she was having some difficulties getting in foal, so that's when we got in touch with Jeff Little,” Hopkins said. “Jeff got her in shape and got her in foal to Not This Time on the first cover.”

The resulting filly, now a two-year-old, was retained for racing. Hopkins said she's now in training in Kentucky and will race next year at Oaklawn Park.

The mare didn't carry the same luck the next two breeding season, failing to catch both years. But Hopkins had high hopes for 2019, as there was one potential stallion that she thought would be a perfect match.

“We saw Mendelssohn on the racetrack and started bugging Coolmore in August,” she said with a laugh. “They said they could get us a contract. We went from Arkansas to Kentucky to watch him run in the Breeders' Cup, and I was praying he didn't win so I could continue to afford him.”

Abuntia checked in foal, and her Mendelssohn colt was born at the end of February, just before Hopkins stepped onto the Coronavirus front line.

“We were blessed with a beautiful colt that looked phenomenal,” she recalled. “With COVID, I couldn't come up to see him as much, but from the very first photos they were sending, I could tell it was a nice individual. He was probably about two months old when he started showing he was a real standout and a class act.”

Hopkins was able to make the trip to Lexington to watch her first foal go through the sales ring to the tune of $300,000, selling to Larry Best's OXO Equine.

“I was so nervous I couldn't actually videotape it,” she said. “I tried. But thankfully he did amazing and brought what he did. I'm ecstatic that Larry Best has the horse and I'm extremely grateful for Coolmore, Four Star Sales and Tony [Lacy, consignor and advisor] for everything they've done for us. It was an amazing first experience.”

Two days later, Hopkins had another weanling go through the sales ring, this one a filly by Not This Time that was born and raised at Hopkins's farm in Arkansas and brought $37,000.

“With her being an Arkansas-bred, I was tickled to death with that,” she said.

Hopkins puts no stock in beginner's luck and has even higher aspirations for the future.

Her goal for next year?

“I would love to be able to have a topper in Book 2 next time.”