Equestricon Closes As a Big Success 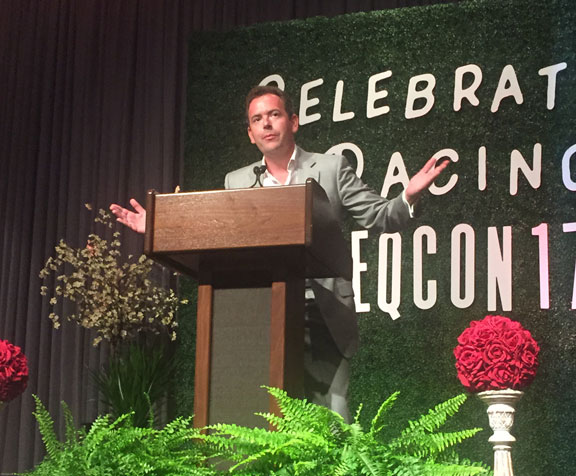 SARATOGA SPRINGS, N.Y.–One thing that I think all racing fans can agree on is that racing fans are complainers. It's in our nature, and most of it comes from a good place–being defensive about a niche sport struggling to survive in many areas and thus wanting it to be portrayed in the best possible light at all times. But the constant navel-gazing micro-criticism can get tiring and often becomes counterproductive, bogging down the industry in petty squabbles instead of tackling larger issues.

That's why it was so refreshing to go to Equestricon, the first all-encompassing horse racing convention, and experience nearly 100% optimism and enthusiasm. That isn't to say there weren't disagreements and grievances aired–quite the opposite. But everything was constructive, and the frequent spirited debates had a distinct undertone of empowerment. We were all here because we loved and were knowledgeable about horse racing, and the ethos of Equestricon was to make clear that we all could do things, both individually and collectively, to improve and grow horse racing. That everyone here was a stakeholder in the game, there are way more of us than we sometimes think and, especially for us younger attendees, that the future of racing is in our hands.

One thing that struck me about the event and the seriousness of its participants was seeing featured speakers in panel discussions and then turning around and seeing them again in the audience of the next panel, asking questions and engaging. There were very few, if any speakers who did their hour or so and left. That set a great example and conveyed to attendees that no one was here just to hustle speaking fees or increase their brand. They're all participating because they feel empowered to make the changes they see as necessary in the industry.

Nick Luck rang in Day Two of Equestricon with his “Racing Keynote” address in the main hall of the Saratoga Springs City Center. Fresh off of helming the innovative and well-received American coverage of Royal Ascot for NBC Sports Network this June, Luck called upon much of that experience to talk, as he has before, about how the U.S. racing industry should feel more pride in its product on the world stage.

Luck added that one of the things making Royal Ascot gain in popularity is the ever-increasing American participation in the five-day boutique meet, thanking U.S. trainers for sending more horses over.

“They're not doing it for the money, they're doing it for the love of the sport and they are proving that American horses can excel on a global stage, on any surface, without the benefit of raceday medication,” he said.

Medication, specifically Lasix, got a lot of play throughout the day, but not in the way you may be used to. There was unanimity that the drug is a net positive for horse health, but a larger point was continually made that racing's constant obsession with fighting over this topic overshadows more significant challenges the industry would be better served focusing on.

Adam Driver, managing director of Global Equine Group and veterinarian, explained the Lasix issue in great detail during the International Perspectives on Racing panel presented by the Breeders' Cup, even getting up several times to draw crude diagrams of the anatomy of a horse's lungs and breathing system.

“Lasix is misunderstood,” Driver said. “It's the only effective treatment for bleeders. People think it's masking symptoms that could lead to catastrophic events and there's no evidence of that. It affects a very specific part of the lung, is pretty safe and helps horses run to their top ability.”

Driver manages the career of Fanciful Angel (Ire) (Dark Angel {Ire}), who ran second at over 70-1 in Saturday's GI Arlington Million and whose owners were among 50-60 people in attendance for the panel.

“In England, you can train on Lasix, but you can't run on it, and it hinders horses performing up to their ability,” he said. “Fanciful Angel is a low-level bleeder and his data was telling us that he could compete at a Grade I level. We went to Arlington because they allowed Lasix and it gave us that opportunity to see him perform at his top level.”

Driver concluded by saying 80% of Thoroughbreds bleed and that, “If you want to breed fast horses, they're going to have this problem. Help them.”

Pat Cummings, Executive Manager of Public Affairs for the Hong Kong Jockey Club, moderated the panel and spoke about the transparency in racing there, displaying slides that showed the HKJC website giving bettors information that is routinely hidden from the American betting public, like surgery and rehab reports when a horse is starting off of a layoff. He noted that bettors in Hong Kong reward them with over $18 million in handle per race and attendance over 20,000 per race day, and also said that the HKJC gives all of its revenue after operating costs to charity, donating more than $500 million last year to become the sixth largest charity organization in the world.

Each member on the panel was asked to give an example of something American racing does well and something it could improve on. All were in agreement that the accessibility of the people behind the horses in America is second to none.

“I went up to Robby Albarado after [Not This Time] lost by a neck in the Breeders' Cup Juvenile and asked for an interview,” Luck relayed. “He said, 'let me talk to the owner first,' and the owner said, 'no, you go talk to your fans first.' That would never happen in England.”

As for what America could improve upon, topics like better education and regulation on whip usage, simplifying condition books and stopping races from running on top of each other were raised.

I also sat in on Perspectives: Women in Racing presented by the Thoroughbred Women's Network, which was an illuminating look at the array of challenges young women face in the business, including systemic sexual harassment.

“There's no other corporate industry in the world where you expect to be harassed if you're a woman,” said Eclipse-award winning racing writer Natalie Voss. “If I'm not wearing my credential on the backstretch, it's a guarantee I get catcalled. You have to be pretty comfortable in your work environment to think that would be tolerated. There's this underlying buzz that, 'yeah, that's OK and accepted.'”

Dr. Carleigh Fedorka, a former farm manager with a Ph.D in Veterinary Sciences, told a story of hiring an enthusiastic 19-year-old woman to walk a yearling down from Barn 43 at Keeneland at the top of a hill to the sales ring, and watching her enthusiasm completely fade after the harassment she experienced on that walk.

“We lost a fan that day,” Fedorka said. “We kill one fan at a time the more we let those residual things go.”

Fedorka argued that women could also help the industry's potential immigration crisis as they are more willing than men to take the low-paying, hands-on work than men, who tend to want more managerial positions. The panel then touched on issues like maternity leave and the way in which racing sometimes markets women as “ornamental,” as writer Teresa Genaro put it.

Again though, there was an underlying feeling of empowerment, as solutions were discussed at length on how to combat these problems, with the Thoroughbred Women's Network emerging as a tool for fighting institutional sexism in racing.

There was also an immensely fun racecaller panel with Tom Durkin, Larry Collmus, Dave Rodman and Travis Stone, narrated by radio host Steve Byk, that delved into the mindset and preparation that goes into becoming the voices of our sport. Durkin, possibly the funniest person in the industry, was the star, but all four men were great and helped the audience relive some of their favorite racing moments, as each caller picked one race to show and tell their story about the call. I personally got goosebumps from re-watching Afleet Alex's Preakness win (Rodman's choice) and American Pharoah's Triple Crown win for Collmus, and the anecdotes behind each moment were terrific.

“People who love horses and horse racing have an individual responsibility to promote it,” Martin said. “Social media is perfect for that. We have to blame ourselves if the sport's not growing the way we want it to.”

Browning recalled that when he first got the email asking him to participate in Equestricon, he sighed and said, “Oh great, I have to stay another day in Saratoga when all I'll want to do is go home.” Then, after walking into the main hall of the convention Monday, he thought to himself, “You knucklehead. These are people giving their time and energy into something we all love and you're whining about staying another day in Saratoga.”

As a racing fan, I'm predisposed to being cynical, and the negativity loop in the sport makes its flaws and shortcomings stand out more than its successes. I would have no problem criticizing Equestricon if it didn't hit the mark, but I'm relaying and amplifying what pretty much every attendee will tell you about their experience: it was exactly the kind of thing horse racing needs. A huge gathering of enthusiastic fans of this incredible sport bandying about ideas and putting their minds together to say that yes, racing has its issues, but they are fixable, and we clearly have the energy and motivation to do it. Many of us can feel isolated in regular life, having few friends who follow the sport and not seeing it covered the way we think it should be. But we are all out there. We're smart and we're capable, but we all have to be pushing in the same direction at the same time. Equestricon was the first step.