English Has Summit In Sight 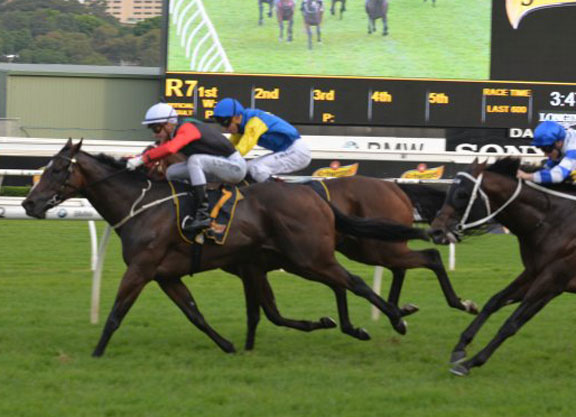 The training partnership of Gai Waterhouse and Adrian Bott are hoping to get their hands on the winner's trophy for Saturday's inaugural The Everest when they saddle their Group 1 winner English (Aus) (Encosta De Lago {Aus}) in the A$10m event. The 5-year-old mare has been brought to the boil slowly by her trainers and has had two promising runs this term most recently when second to In Her Time (Aus) (Time Thief {Aus}) in the G2 Premiere S. at Randwick Sept. 30. English was put through her paces by her big race jockey Blake Shinn at Canterbury on Monday and co-trainer Adrian Bott reported it was all systems go for Saturday. “It was a good strong hit-out for her,” Bott told Racing And Sports. ” That should bring her on nicely. She shouldn't have to do too much more. There's more improvement to come from that second-up run. Her weight's spot-on. She's a very happy mare.”

The draw has not been favourable to English in her last two starts and Bott is hoping for more luck in that department ahead of Saturday's 1200m speed contest. “We don't want to be too wide. In both runs this time in we haven't been able to position ourselves where we've wanted to in the run,” Bott said.

Owned by her breeders Newhaven Park Stud, English gained her slot for the Everest back in July and will represent the TAB. “She was selected quite early by the TAB so from a public point of view there's been a lot of interest in her work, trials and program. That adds a more pressure,” he added.