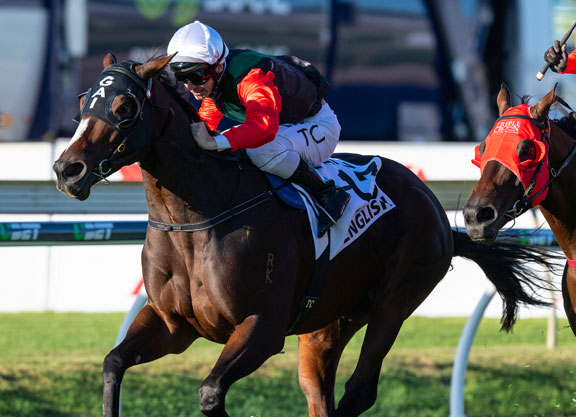 English (Aus) (Encosta de Lago {Aus}), winner of the G1 All Aged S. two years ago, hadn't seen the winner's enclosure in 14 months, but she righted that wrong in a big way on Saturday when posting a mild upset in the G1 Doomben 10,000 and setting herself up as a candidate for the A$13-million The Everest on Oct. 13. Under cover two lengths behind last year's Everest winner Redzel (Aus) (Snitzel {Aus}) turning into the straight, English hit the front on the inside of Redzel at the furlong pole when put to a drive by Tim Clark, while Le Romain (Aus) (Hard Spun) swamped the favourite on his outside. Impending (Aus) (Lonhro {Aus}) came with a late rally to nip Le Romain for second, but the wire came in time for English. Second favourite In Her Time (Aus) (Time Thief {Aus}) was never a factor when it mattered and beat three home.

“We came up here very confident that she was feeling well within herself and we freshened her up after the T J Smith deliberately to bring her through this carnival,” Adrian Bott, co-trainer with Gai Waterhouse, told Racenet. “I thought the races would really suit her up here. There was a bit of give in the ground which was probably the key as well. We'll keep her up here now, obviously there are races like the BTC Cup, she's got a nomination for the Stradbroke and maybe the Tatt's Tiara back to the fillies and mares grade. It is all open to her at the moment and I guess with a win like that you've also got to see if we can keep her in training and look at the race like The Everest again.”

English is the second foal out of the triple group winner Court. That mare had a few unlucky years post-English for Newhaven Park, with a dead foal and a barren year, but her next foal, the subsequently stakes-placed Al Naifa (Aus) (Redoute's Choice {Aus}), made up for lost time when garnering a winning bid of A$1.8-million from Sheikh Khalifa at Inglis Easter last year. Court's most recent reported produce is a yearling filly by Snitzel (Aus).