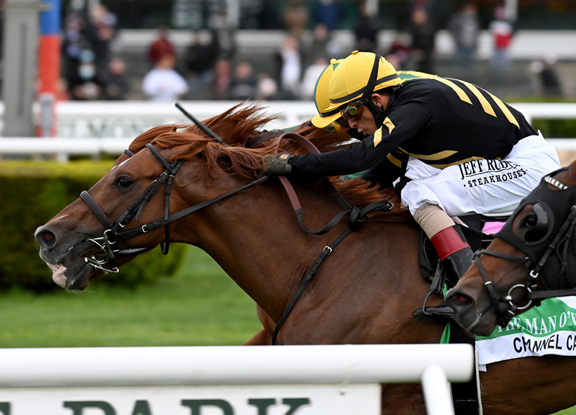 Johnny V. did it again.

Channel Cat, off at 8-1, dueled from the inside through an opening quarter in an eye-catching :22.69 in this 1 3/8-mile affair. He began to shake clear rounding the clubhouse turn and slowed it down some to a testing half mile in :47.53. The 6-year-old turned them in as the one to catch and dug down deep in the stretch to hold last year's GI Belmont Derby Invitational S. winner and Moon Over Miami (Malibu Moon) safe in a photo finish.

“I didn't think we went that fast,” Velazquez said. “I knew we were going fast, but not quite :22 and change. I gave him loose reins and he was a happy horse up front. I was happy with the way that he was doing things. I felt [Gufo] coming when I was asking him to run.”

Previously under the tutelage of Todd Pletcher, Channel Cat hadn't visited the winner's circle since posting a wire-to-wire score in the 2019 GII Bowling Green S. at Saratoga. He made three previous starts for Jack Sisterson, finishing fifth in the GII Ft. Lauderdale S. Dec. 12, fifth in the GIII W.L. McKnight S. Jan. 23 and second in the GII Elkhorn S. at Keeneland last time Apr. 17. He hadn't been placed on the lead since his front-running score in the Bowling Green.

“I left it [the trip decision] in Johnny Velazquez's hands,” Sisterson said. “I told him last weekend [winning the GI Kentucky Oaks and Kentucky Derby] was pretty incredible. I didn't sleep last night. I wasn't nervous about Channel Cat, I was nervous about letting John Velazquez down because I didn't want to ruin last weekend's celebrations.”

Sisterson continued, “Thanks to Channel Cat and the staff back at the barn, who do all the hard work to win a Grade I. I don't take any credit for this. It's all due to the people behind the scenes that people don't see. He was coming into the race in great shape. He ran a great race in the Elkhorn off the layoff and finished up good, closing into fast fractions. It's nice to win a race for the owner. He's so passionate and supportive of the sport.”

English Channel and Kitten's Joy finished 2020 as the one-two duo atop the North American leading turf sire list and Channel Cat's pedigree melds the two together with a flourish. He is one of four stakes winners–with three graded and one being a SW/GISP Canadian champion–by English Channel out of a Kitten's Joy mare. Both stallions, a year apart in age and both champion grass horses themselves, have plenty of other accomplishments as well, with English Channel the sire of 56 black-type winners to date with 30 graded winners, and Kitten's Joy counting 15 stakes winners out of his daughters. Channel Cat races as a homebred for Calumet Farm, who stands English Channel and bought Carnival Kitten for $30,000 at the 2014 Fasig-Tipton Kentucky February sale before reselling her for $45,000 at the 2018 Keeneland November sale to Nursery Place. The mare has since produced a 2-year-old colt by Red Rocks (Ire) and most recently visited the court of Speightstown.