Empire Strikes Back with Morello 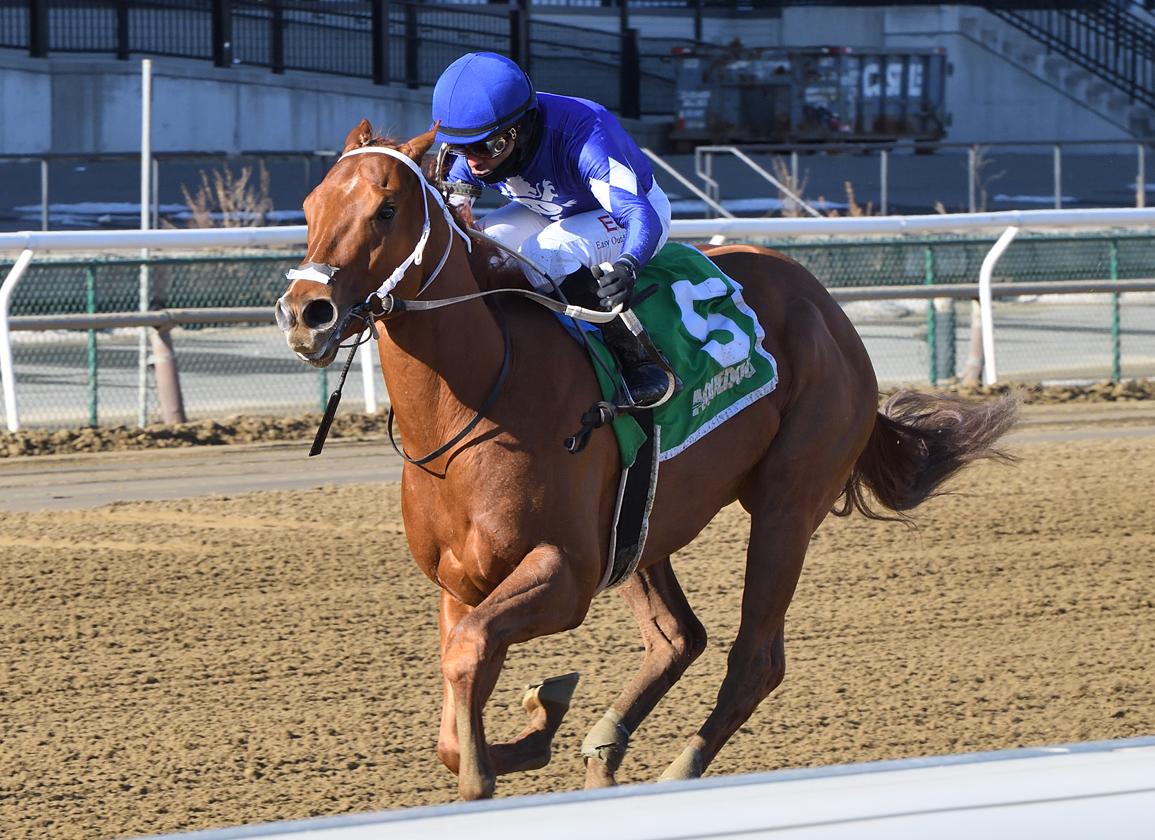 If the early trials have produced a Derby horse to “rise without trace,” then that might well turn out to be Morello (Classic Empire). As winner of two sprints round Aqueduct this winter, he obviously still has a long way to go–in every sense. But there's no mistaking his raw talent, nor the fact that we have only seen the tip of the iceberg even in that very stylish exhibition in the Jimmy Winkfield S.

Certainly Morello looks eligible to restore some deserved attention to his sire. Though they're all gasping in the wake of the phenomenal Gun Runner, to me Classic Empire has been rather neglected among the four Ashford sires who featured among the next six in the freshman's table last year. He's standing this year at $17,500–half his opening fee–and his fourth book came in at less than half of that assembled by Practical Joke, who has duly produced exactly the kind of precocious stock anticipated by all that sales buzz.

Yet Classic Empire laid very solid foundations with his first crop of juveniles, lacking only the kind of headline horse that so often covers a multitude of sins. Collectively they ranked fourth by prizemoney from 60 runners, fewer than each of his studmates: Practical Joke fielded 68, Cupid 75 and Caravaggio, having started his career in Europe, as many as 81. Five of Classic Empire's 21 juvenile winners earned black type, including Classy Edition, who followed up her debut win at Saratoga with a couple of state-bred stakes.

She had made $550,000 as a Timonium 2-year-old, in the same session where Morello–who had similarly clocked :10 1/5–realized $250,000 from BL Racing out of the Sequel Bloodstock draft. (He races in the silks of Blue Lion Thoroughbreds, Craig and Victoria Taylor.) That concluded his second pinhook cycle, having made $200,000 as a yearling at Fasig-Tipton the previous year (sold to Autrey Bloodstock by Paramount Sales, in the same consignment as GII San Vicente S. winner Forbidden Kingdom {American Pharoah}); and $140,000 when sold to American Equistock through Betz Thoroughbreds as a Keeneland November weanling.

Morello was bred in partnership by Robert Tillyer, who has meanwhile returned to Dixiana as farm manager after 18 years with Betz Thoroughbreds, and reproductive veterinarian Dr. Chet Blackey. They had bought his dam Stop The Wedding (Congrats), a winner just once in 25 starts at claiming level, after breeding a good one from her half-sister Saint Bernadette (Saint Ballado).

Saint Bernadette had cost them just $20,000 from Adena Springs as a 10-year-old at the 2009 Keeneland November Sale and the following spring they sent her to the rookie Pioneerof The Nile. The result was eventual GI Preakness S. third Social Inclusion, who prompted Tillyer and Blackey to move privately for his dam's half-sister after he broke the Gulfstream track record in thrashing Honor Code (A.P. Indy) in an allowance on his second start.

Saint Bernadette became something of a goldmine thereafter. A brother to Social Inclusion made $475,000 as a yearling; a Curlin colt brought $575,000; and her last foal, a filly by American Pharoah, realized $425,000.

“We just felt she was one of those mares that deserved a chance,” recalls Tillyer. “She'd been graded stakes-placed, she was never off the board in eight starts, one of her early foals had made good money, and she was very attractive herself. So we got lucky, managing to buy her for that money and then breeding her to Pioneerof The Nile when he was just getting started. And then we got lucky again breeding her to Curlin, who was still only $35,000, and would then make a great comeback before we sold that colt.

“Sadly we lost Saint Bernadette a couple of years ago, and overall she was just a bit unlucky with some of her offspring on the track. And it had looked like becoming a similar thing with Stop The Wedding. We were getting to the point where she was on the bubble, commercially, and opted to sell Morello as a weanling. He was always a lovely colt, really classy, and it was nice to see everybody making some money. Obviously Pat Costello [of Paramount] did a great job raising him, and I think he could have probably got a little more for him but for hitting the middle of a pandemic.”

As a son of Pioneerof The Nile, Classic Empire had been chosen for Stop The Wedding to try and hit the same kind of chord with the family as Social Inclusion.

“It was the usual thing of deciding what was going to be commercial, and what we could afford,” Tillyer says. “With where the mare was at the time, we couldn't justify Pioneerof The Nile [standing at $110,000 prior to his premature loss the following year], so we went with his son as the next best thing. Classic Empire was obviously a really talented horse, so it all made sense.”

If Tillyer's record is anything to go by–besides being ahead of the curve with Pioneerof The Nile and Curlin, as just noted, he co-bred GII Fountain Of Youth winner Ete Indien (Summer Front) from a $23,000 mare–then his approval augurs well for Classic Empire. But even the shrewdest horsemen need luck on their side and, having resolved to reorganise his own breeding interests on leaving Betz Thoroughbreds, he is now grateful that the market turned down the chance to buy Stop The Wedding at the 2020 Keeneland January sale. Instead, his good friend Nicky Drion stepped in to take a third after she failed to meet her reserve at $11,000, and she now boards at Foxtale Farm.

“I don't know what we'd have taken, to be honest, but obviously a lot more than she was making!” recalls Tillyer. “We knew she was a lovely mare. She's nice-sized, pretty correct in front, and every foal she's thrown has been beautiful. She's just been a bit unfortunate with her offspring on the track.”

Voric Stables also got lucky in picking up the Cairo Prince filly Stop The Wedding was carrying that day, deep in the September sale for just $16,000. They, too, will doubtless be following Morello's progress with enthusiasm.

“Yeah, it looks like he could be a good horse,” Tillyer says of Morello. “To me, knowing the family, he looks like a miler. But we'll see. Of course you'd love it if he can go a mile and a quarter. Time will tell and we're looking forward to seeing him in the [GIII] Gotham S. Mar. 5.”

With 50 starting points to the winner there, Morello could make it hard to turn down a tilt at the Derby. His first two dams are both by sons of venerable Classic influences in Congrats (A.P. Indy) and Runaway Groom (Blushing Groom {Fr}), and his fourth dam is by the sturdy turf/stamina influence Assagai. And of course Classic Empire, though a champion juvenile (and as precocious as they come from that sire-line), was consolidating as you would expect from his beautifully balanced pedigree when unfortunately derailing after a head defeat in the GI Preakness S.

Besides extending a resonant Classic sire-line, his maternal family is seeded through its first four generations by Cat Thief, Miswaki, Hoist The Flag and Princequillo. His third dam is a half-sister to champion sophomore filly Revidere (Reviewer) and the fifth dam, Alanesian (Polynesian), also features along the bottom line of Harlan's Holiday, Boldnesian and Ride The Rails. The lasting imprint shared by that trio, through Into Mischief, Bold Reasoning/Seattle Slew and Candy Ride (Arg), qualify Alanesian as a real linchpin of the modern breed.

Overall I'm confident that Classic Empire, granted adequate support, will prove a most wholesome and progressive influence. We actually gave him a place on the Value Podium for this intake, in our annual winter survey of Kentucky stallions, and if that seems a dubious distinction then don't forget he has already caught up with his studmate Practical Joke once. Having dropped down the divisional standings when discarding his rider in the GI Hopeful S., where all the plaudits went to winner Practical Joke, he came through in the Fall to reduce his precocious rival to a distant third at the Breeders' Cup.

But credit for Morello is obviously shared by his breeders. For Tillyer to be involved on the early Derby trail for the second time in three years is quite a remarkable achievement, at the level he operates in what is only a sideline to his day job.

Ete Indien was co-bred with another good friend, Eric Buckley, and sold as a Keeneland September yearling for $80,000. His dam East India (Mizzen Mast) is still only 10. She is in foal to War Of Will and, so long as she doesn't deliver too late, eyeing a date with Gun Runner next. Her 3-year-old daughter by Runhappy, sold as a weanling for $100,000, progressed to win a Churchill maiden for Rusty Arnold in November and is evidently well regarded.

Tillyer stresses that it was Buckley who was strongly interested by East India's deeper family, her dam being a half-sister to the important producers Words Of War and Ascutney (both by Lord At War {Arg}). And he says there's no big secret to his own eye for a mare: you obviously want something that will throw a good physical, and you don't want two blank dams when you come to sell. Bottom line is that Tillyer relishes ventures like this, with his buddies, as a fun ancillary to working for the ambitious farm where he first started out in Kentucky (under a previous ownership) a couple of decades ago and where he has already presided over the sale of its first ever seven-figure yearling, at Keeneland last September.

“It's funny how things work out, and to come full circle this way is fun,” he says of his return to Dixiana. “Working for Bill and Donna Shively is a bit of a dream come true, they've done an amazing job putting together three farms and some very nice mares, and they're just great people to work for. I've been very lucky, all round, and I'm very thankful to the people who have supported me. Chet and I have been friends for 20 years now, he's always been one of my biggest supporters, always willing to go in on a partnership, whether it's a pinhook or a broodmare. When these things go right, it's a lot of fun. And this mare deserves a good runner.”