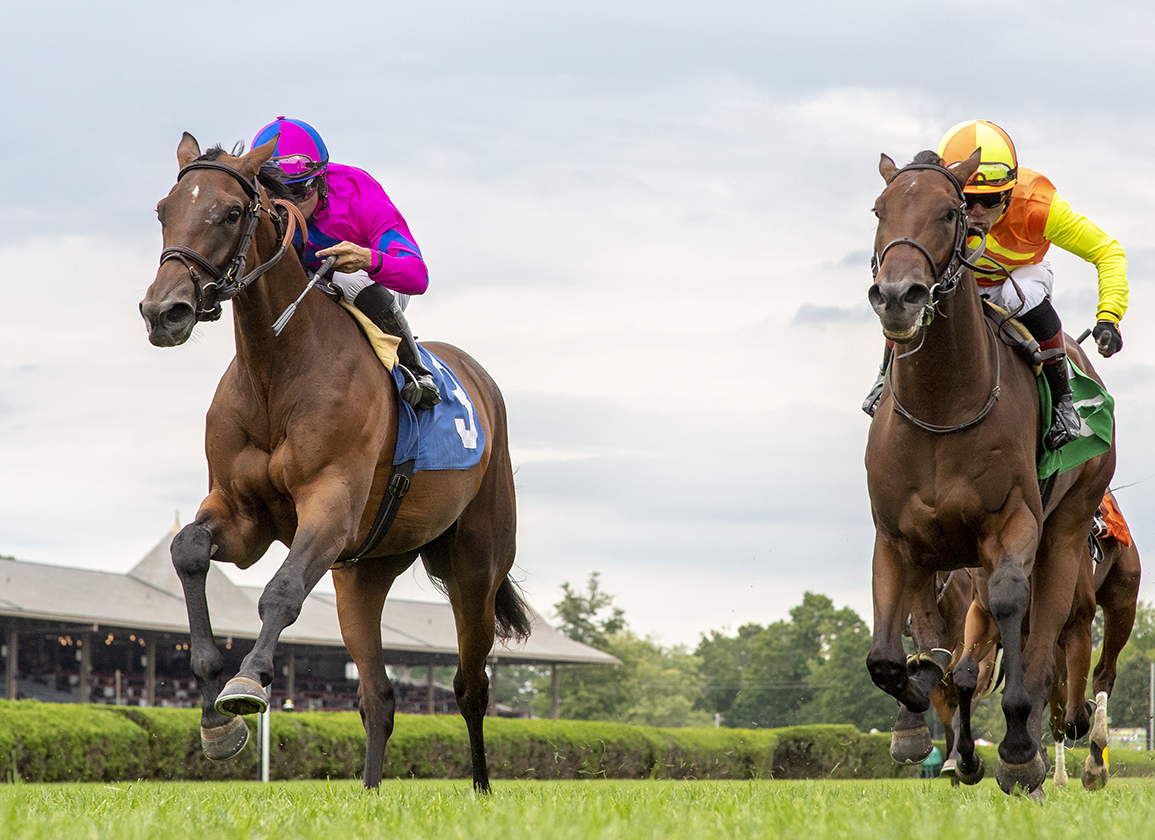 2nd-Saratoga, $100,000, Msw, 8-1, 2yo, f, 1 1/16mT, 1:45.77, fm, head.
BLISSFUL (f, 2, Empire Maker–Belleski {MGSW, $374,586}, by Polish Numbers)    flashed some ability in her morning trials over the Keeneland main track last month, including a sharp half-mile gate move in :47 4/5 (3/62) in her penultimate move July 14. Off at an overlaid 32-5 off a 7-2 morning line, the attractive bay filly hopped slightly at the break and was clearly last to make the first turn before setting into a good rhythm at the tail for the in-form Luis Saez. Creeping into it down the backstretch while stalking favored Silvery Rill (War Front x Stays In Vegas) in her slipstream, Blissful appeared to idle some about three furlongs out, but jumped back into the bridle under an energetic ride approaching the quarter pole. Despite surrendering first run to Silvery Rill, Blissful found her best stride inside the final eighth of a mile and finished with a flourish to score by a narrow margin. A $155,000 Fasig-Tipton October yearling, Blissful breezed an eighth of mile–a touch greenly–in :10 2/5 and was hammered down for $350,000 at this year's OBS April Sale. A late April foal, Blissful is a full-sister to Keri Belle, GSW, $323,140, who broke her maiden in her first try on turf at odds of nearly 10-1 at Aqueduct in 2014 before going on to land the GIII Megahertz S. at Santa Anita in 2016. Belleski, who also graduated in her first go on the grass prior to becoming a dual graded-stakes winning turf sprinter, is the dam of a yearling filly named Sparrow (Into Mischief). She was barren to Klimt for this season. Sales history: $155,000 Ylg '20 FTKOCT;$350,000 2yo '21 OBSAPR. Lifetime Record: 1-1-0-0, $55,000. Click for the Equibase.com chart or VIDEO, sponsored by TVG.
O-Belladonna Racing LLC, Manganaro Bloodstock & Edward J Hudson Jr; B-Thoreau LLC & Empire Maker Syndicate (KY); T-Cherie DeVaux.