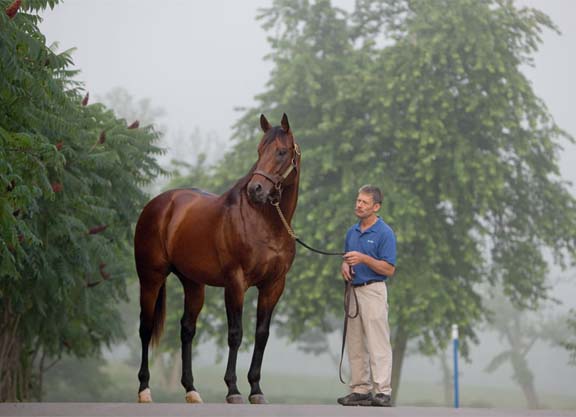 “Elusive Quality has had two great careers but it's the right time for him just to relax and take it easy here at Jonabell,” said Dan Pride, COO of Godolphin in America. “But given the success of his current sons at stud, along with the production from his daughters, his will certainly be a legacy that will last for quite some time.”

Racing in Sheikh Mohammed's colors, Elusive Quality won the 1998 GIII Jaipur H. and set a world record for a mile in 1:31.63 while winning that year's GIII Poker H. for trainer Bill Mott. He also set the seven-furlong track record of 1:20.17 at Gulfstream Park in 1997. On the board in 14 of 20 starts, the bay won nine times and earned $413,284 before retiring to Gainsborough Farm, then owned by the sheikh's eldest brother Sheikh Maktoum, in 1999.

Elusive Quality, who began his stud career for $10,000, produced 11 black-type winners from his first crop, including French Group 1 winner Elusive City. His second crop included Eclipse champions Smarty Jones and Maryfield, winner of the GI Breeders' Cup F/M Sprint. By 2005, his stud fee had risen to $100,000.

“Smarty Jones, Raven's Pass, Sepoy, Quality Road–he was the type of sire that could get you any kind of horse–dirt, turf, synthetic, and they could go short, middle or long,” Pride said. “He truly was a very special and versatile sire.”

Elusive Quality has sired a total of 241 worldwide stakes winners to date, 127 black-type winners and 51 graded or group winners–14 of those at Grade I level.