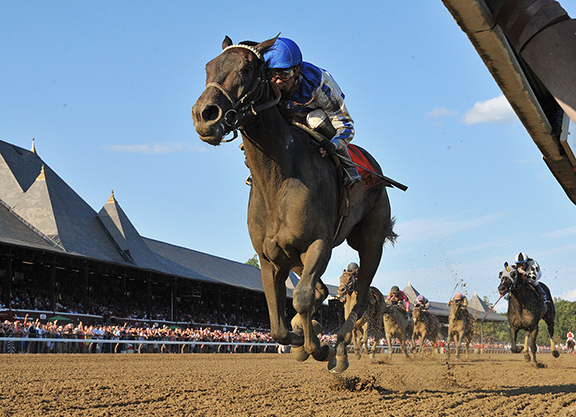 “TDN Rising Star” Elate (Medaglia d'Oro) just missed behind Abel Tasman (Quality Road) last time in Saratoga's GI Coaching Club American Oaks July 23, but returned with a vengeance Saturday, romping home to an impressive 5 1/2-length victory in the prestigious GI Alabama S. Racing in mid-pack, the 4-1 shot kept close tabs on pacesetting fellow “TDN Rising Star” It Tiz Well (Arch) through opening splits of :23.46 and :46.96. As three-quarters went up in 1:10.92, GI Mother Goose S. heroine Unchained Melody (Smart Strike), who had been stalking from second throughout, suddenly dropped to the back and was pulled up, and Elate and Queen's Plate victress Holy Helena (Ghostzapper) moved into a joint second. Drawing even with It Tiz Well turning for home, Elate swiftly seized command in early stretch and cruised clear to win as she pleased. It Tiz Well held on for second over GI Acorn S. runner-up Salty (Quality Road).

“We gave her a little bit of time after she broke her maiden and we started cranking her up and getting her ready for the races, and it was just kind of like she really hadn't come alive yet,” said winning trainer Bill Mott, who won the 2005 Alabama with Sweet Symphony and the 2011 renewal with the late three-time champion Royal Delta. “She was doing fine; her works were good without being spectacular and you could tell she was probably a filly that was going through a little bit of a growing stage, a development stage. We said then that she probably wouldn't be on her game for the Kentucky Oaks, that she was more of an Alabama filly and that's exactly how it worked out.”

Mott added, “I just wanted the win for the filly and for the connections. Ms. [Adele] Dilschneider is such a great person. She's just a wonderful lady, one of the great women of the turf. You couldn't have a better owner. She loves her horses and she was looking forward to this as much as I was.”

“When I got to the three-eighths pole, I felt I had a lot of horse underneath me,” winning rider Jose Ortiz said. “I just went along with her and as we entered the stretch, she really got going and I didn't look back, I kept riding. It's a Grade I and I didn't want to look back for anybody, I just focused on riding her to the finish.”

Jockey Joel Rosario offered an update on Unchained Melody, who was pulled up and vanned off, saying, “I had to keep asking her to just hold my position and she was there and at one point, she wasn't. Everybody was getting away from me. She was steady, just didn't want to do it. After that, I just had to pull her up and make sure she was OK. She was feeling fine physically. I don't know, she just got tired. I don't know what happened.”

Elate earned Rising Star honors after an ultra-impressive 12 1/2-length graduation on debut at Aqueduct Nov. 26 and checked in second as the heavy favorite next out in Tampa Bay's Suncoast S. Feb. 11. A late-running third as the chalk behind It Tiz Well in Oaklawn's GIII Honeybee S. Mar. 11, the dark bay was pulled up and vanned off in Keeneland's GI Ashland S. Apr. 8. Mott regrouped after that start, giving Elate a class break in a first-level allowance at Churchill Downs May 5, where she finished second over a sloppy track.

The Hall of Famer remained conservative, sending the homebred to Delaware's Light Hearted S. June 15, and was rewarded when she romped home to a 5 1/2-length victory. Stepped back up to Grade I company in the Spa's CCA Oaks next out July 23, Elate gave divisional leader Abel Tasman a fight down the stretch, coming up a head short at the wire, but finishing 3 1/4 lengths clear of Salty. Ortiz lodged a claim of foul against Mike Smith and Abel Tasman for crowding Elate in the stretch, but the results stood as is after a steward's inquiry.

Elate, who is the 18th Grade I winner for her sire, was bred on the same Medagalia d'Oro/Forty Niner cross that is responsible for Hall of Famer Rachel Alexandra, two-time champion Songbird and MGISW turfer New Money Honey, who finished fifth in this first try on dirt. Her stakes-winning dam Cheery is by Distorted Humor, whose daughters have produced the likes of New Money Honey, champion Arrogate and MGISWs Constitution and Practical Joke.

Elate is the first foal out of Cheery, who failed to get back in foal to War Front, but produced a colt named Haunt (Ghostzapper) in 2016 and a Blame colt Mar. 8 of this year. The 8-year-old mare was bred back to Medaglia d'Oro this term.