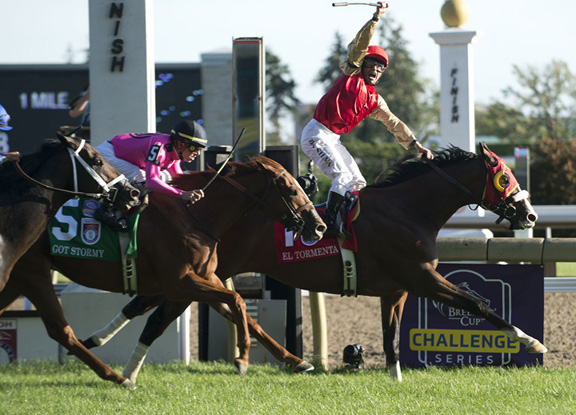 Let go as the third-longest shot on the board at 44-1, Sam-Son Farm homebred El Tormenta (Stormy Atlantic) gave trainer Gail Cox her first top-level success, outfinishing the favored filly Got Stormy to win Saturday’s GI Ricoh Woodbine Mile and, in so doing, earning a spot in the gate for the GI Breeders’ Cup Mile at Santa Anita Nov. 2.

“It’s a Grade I win and it’s a ‘Win and You’re In,’ so it’s huge,” winning trainer Gail Cox said. “I was a little worried with the one-hole and being on the rail because if you’ve seen his past three starts, they’ve been troubled. I just think he was laying closer and really bullied his way through a little bit. He’s a very, very nice horse, and was probably overlooked here.”

Allowed to settle in mid-field, El Tormenta was able to save ground on the back of pacesetting Silent Poet (Silent Name {Jpn}) and looked to be full of run approaching the long Woodbine straight. Asked to quicken entering the final quarter-mile, El Tormenta found running room three paths off the inner rail and had the GI Fourstardave H. heroine Got Stormy-who looked to be cruising beneath Tyler Gaffalione-in his sights. El Tormenta made the lead inside of the chalk with less than a furlong to run and stayed on best of all.

Lucullan (Medaglia d’Oro) crossed the line third, but was demoted to fourth for veering out sharply and interfering with Raging Bull in the final stages.

El Tormenta won one of his five prior trips to the post this term, posting a neck victory in the GII Connaught Cup S. June 1. He was also a close fourth in both the GI Highlander S. June 29 and GII Play the King S. last time Aug. 24.

Michael Balaz of Sam-Son Farm added, “He’s had a good campaign, but a lot of tough luck. Eurico [Da Silva] gave him a masterful ride, and got him through. He was able to really show his best self today. What a special win.”

El Tormenta is one of 108 stakes winners and the eighth Grade I winner for sire Stormy Atlantic, a son of former leading sire Storm Cat who traces tail female to blue hen Moccasin. El Tormenta’s damsire, El Prado (Ire), is no less successful, with black-type winners out of his daughters including 2012 GI Kentucky Oaks winner Believe You Can (Proud Citizen) and 64 others. While El Tormenta is the first stakes performer out of his dam, who also has yearling and weanling fillies by Mizzen Mast and Palace, respectively, he traces to one of Canada’s top families. His third dam produced 1999 Canadian champion Hello Seattle (Deputy Minster) and is a half-sister to Canadian Horse of the Year, Canadian Broodmare of the Year, and GI Breeders’ Cup Distaff winner Dance Smartly (Danzig), as well as to two-time leading U.S. sire Smart Strike (Mr. Prospector). They all trace to Sam-Son Farm foundation mare No Class.