El Areeb Again in the Withers 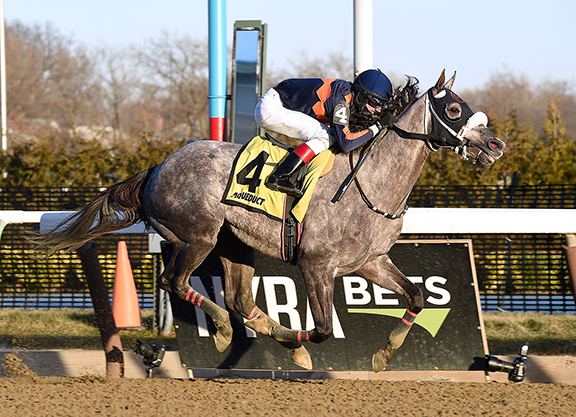 Streaking 'TDN Rising Star' El Areeb (Exchange Rate) followed up on a commanding win in the Jan. 2 GIII Jerome S. in the mud with another dominant win in Saturday's GIII Withers S. at the Big A.

“To be fair to the horse, he's done everything asked of him and then some,” trainer Cal Lynch commented. “If he keeps doing this, I'll talk to the owners, and we'll sit down and talk about where we'll go next, probably the [GII] Wood [Memorial Apr. 8]. I don't know if we'd go to the [GIII] Gotham [Mar. 4] or not, I'm not sure yet, but that'll be the discussion we'll have. We'll see how he comes back the next few days and make a decision.”

El Areeb was settled on the outside in the clear in third behind True Timber, who set fractions of :24.29 and :49.31 after stumbling badly at the start. El Areeb moved to the attack while three deep on the far turn and inhaled the pacesetter to capture his fourth straight in style. Winner of Laurel's six-furlong James Lewis III S. Nov. 19, he followed with a pace-pressing score while making his two-turn debut in the Jerome.

“I thought he did it a little easier today,” Lynch said. “I know he didn't win by as far, but Trevor [McCarthy] tapped him once on the neck, he said, just to keep his attention. He's shown maturity there, when he sat behind those guys. He's just a lovely horse.”

Lynch continued, “He's run every time. He made his [sixth] start today, he's got a good enough foundation there. He's got another 10 points from today [towards the GI Kentucky Derby]. If we're going to take a shot at these other three things [the Triple Crown], it'd probably be nice to have a little break before we do. I won't' even say it, I'm a little superstitious.”

El Areeb, a $340,000 OBSMAR juvenile after breezing an eighth in :10, is out of the winning Sam-Son Farm-bred Feathered Diamond, whose unraced dam Sometimesadiamond (Mr. Prospector) is a half-sister to Canadian champion Regal Intention (Vice Regent). Feathered Diamond's Gio Ponti colt, now two, sold for $4,500 at the 2016 Fasig-Tipton Kentucky October Yearling Sale. The 14-year-old mare sold in foal to Corinthian for $385,000 to Woodland Farm at the 2008 Keeneland November sale. She didn't have a reported foal in 2016 and has a Morning Line foal colt on the ground now.