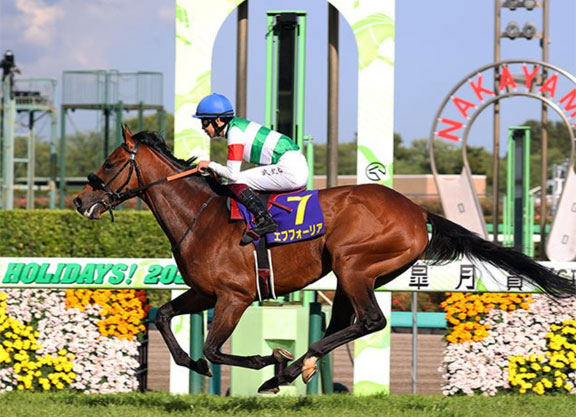 Second choice on the board at 27-10, the bay rated in fourth against the fence past the stands the first time as World Revival (Jpn) (Epiphaneia {Jpn}) cut out the first 1000 metres in 1:00.30. That rival ceded the lead to Titleholder (Jpn) (Duramente {Jpn}) as the field hit the far turn, and Efforia was keeping close tabs on the vanguard in an ideal stalking position.

Asked for his best a quarter-mile from home, he shifted off the fence, split horses and took command with 350 metres remaining. Flicking his ears in late stretch, Efforia coasted across the wire three lengths to the good of Titleholder, who was a neck in front of Stella Veloce (Jpn) (Bago {Fr}). Admire Hadar (Jpn) (Lord Kanaloa {Jpn}) was another neck back in fourth. Favoured Danon the Kid (Jpn) (Just A Way {Jpn}), who was notably warm in the preliminaries, could only finish 15th racing just behind the pacesetters and tiring late.

“It's such a great feeling,” commented jockey Takeshi Yokoyama, whose father Norihiro had won the same race with Seiun Sky (Jpn) (Sheriff's Star {GB}) in 1998, the year the younger Yokoyama was born. “I was fortunate to have been able to ride this colt since his debut and although I knew the colt, coming here undefeated, would be heavily backed and the pressure would be great, I believed that if I put my concentration on using whatever skills I had as a rider and bring out the best performance from my horse, that we would have a great chance of winning. The pace wasn't that fast, so we were able to cruise along in a good position but we were a little tight going into the stretch and I couldn't be sure of my win until the end.”

Efforia captured his first two starts over this trip in August of his 2-year-old year and in November at Sapporo and Tokyo, respectively. He exited winter quarters in great style on Valentine's Day with a win in the G3 Kyodo News Hai Tokinominoru Kinen at Tokyo.

Katies Heart, who won three times in Japan, first foaled the placed Rioja (Jpn) (Rulership {Jpn}) in 2016 and, after no reported foal a year later after being bred to Dunkirk, produced Efforia. In 2019, she had a colt by Harbinger (GB) and her 2020 produces is a filly by Maurice (Jpn). She was covered by Satono Crown (Jpn) last term.