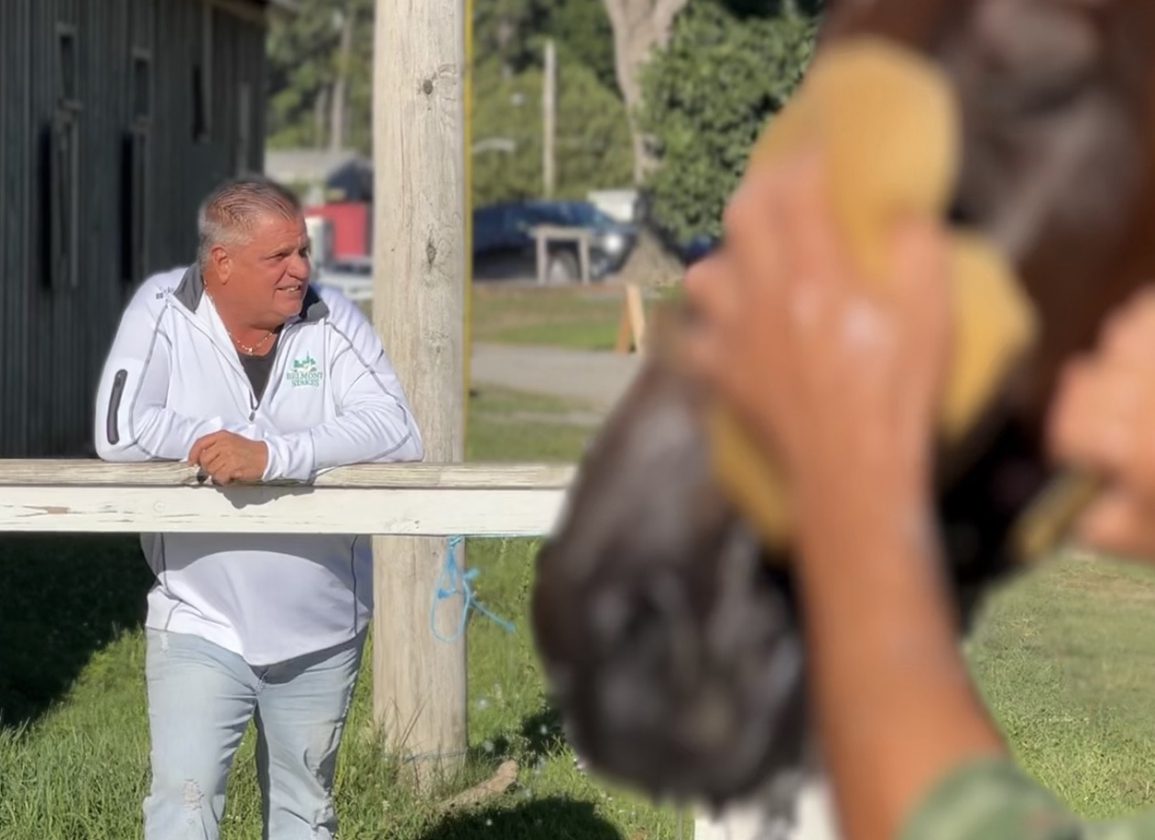 There is no shortage of Saratoga enthusiasts who claim they have been coming to the iconic track for as long as they can remember, but Eddie Fazzone has spent his summers at Saratoga quite literally from before he could walk.

The Schenectady native always dreamed of running a horse at Saratoga one day. He never even considered winning a race there, let alone going to the winner's circle for a stakes race, but as it seems to happen so often in Saratoga, dreams–be they envisioned for decades or not yet imagined–have a habit of coming true. This summer, Fazzone celebrated his first victory at his beloved hometown track when his filly Dream Central (Central Banker) got up in the nick of time to win the Suzie O'Cain S.

“I've been coming to Saratoga for as long as I can remember,” Fazzone explained. “I've probably been coming here longer than a lot of owners in the game. My parents used to bring us in a stroller when they wanted to come. When Dream Central won that race, it was so special for me. Even just running a horse here is special, let alone winning a stakes race.”

Saratoga regulars may recognize Fazzone as the owner of Eddie F's Eatery, a popular New England seafood spot just a few blocks off Broadway. Fazzone and his wife Lisa opened the restaurant in 2016, later adding a second location at the racetrack next to the Hattie's Chicken stand.

“We have a great clientele and we're growing every year,” Fazzone said of their restaurant. “Everybody loves it for the whole belly clams. A lot of people aren't familiar with those–it's the clam right out of the shell and you fry it. We get people coming into the restaurant who tell me that they drove two hours to get our whole belly clams because they're hard to find in our area.”

Two years after starting his restaurant, Fazzone launched Eddie F's Racing. He found success early on with full-brothers Lobsta and Chowda. Both sons of Emcee were purchased from John Jayko of Fedwell Farms and sent to train under Fazzone's longtime friend Gary Sciacca. 5-year-old Chowda became Fazzone's first stakes winner when he claimed the 2020 Gander S. while 4-year-old Lobsta is a dual stakes winner. Both horses are still in training alongside their 2-year-old half-brother Oysta (Micromanage).

“We're a small stable and we're not spending a ton of money on these horses, so you're just hoping to get lucky,” Fazzone said. “We have 12 horses right now. We won our first stake in 2020 and now we've already won five stakes races, which is something that you would never think could happen for a little stable.”

Fazzone purchased Dream Central from Fedwell Farms as a 2-year-old last year. Her first two races were taken off the turf, but when she got to try the grass at the end of her juvenile season, her connections saw a dramatic improvement. After three more winless-but-improving tries as a sophomore, the filly finally broke her maiden at odds of 39-1 in a New York Stallion Series S. at Belmont in June.

Stretching out to a mile and a sixteenth for the Suzie O'Cain on July 22, Dream Central came flying from the back of the pack and surged six wide at the top of the stretch, closing to get the head over even-money favorite She's a Mia (Astern {Aus}).

“I couldn't talk after that race because I was so hoarse,” Fazzone said with a laugh. “I didn't think she was going to get there at the eighth pole, but when she changed leads she just changed gears and boom–she nailed that horse at the wire. The first win for me at Saratoga in a stakes race? You couldn't ask for anything better.”

Fazzone was honored to win the inaugural running of the Suzie O'Cain S., which was named after horsewoman Suzie O'Cain, who passed away early this year. O'Cain and her husband Dr. C. Lynwood “Doc” O'Cain managed Highcliff Farm in Delanson, New York.

“Suzie used to come in my restaurant from when I first opened in 2016,” Fazzone recalled. “I got to know Suzie really well. Doc, her husband, was just in the restaurant the other day and we were talking about it and he was so happy that we won because he knew how much Suzie loved Eddie F's, so that was great.” 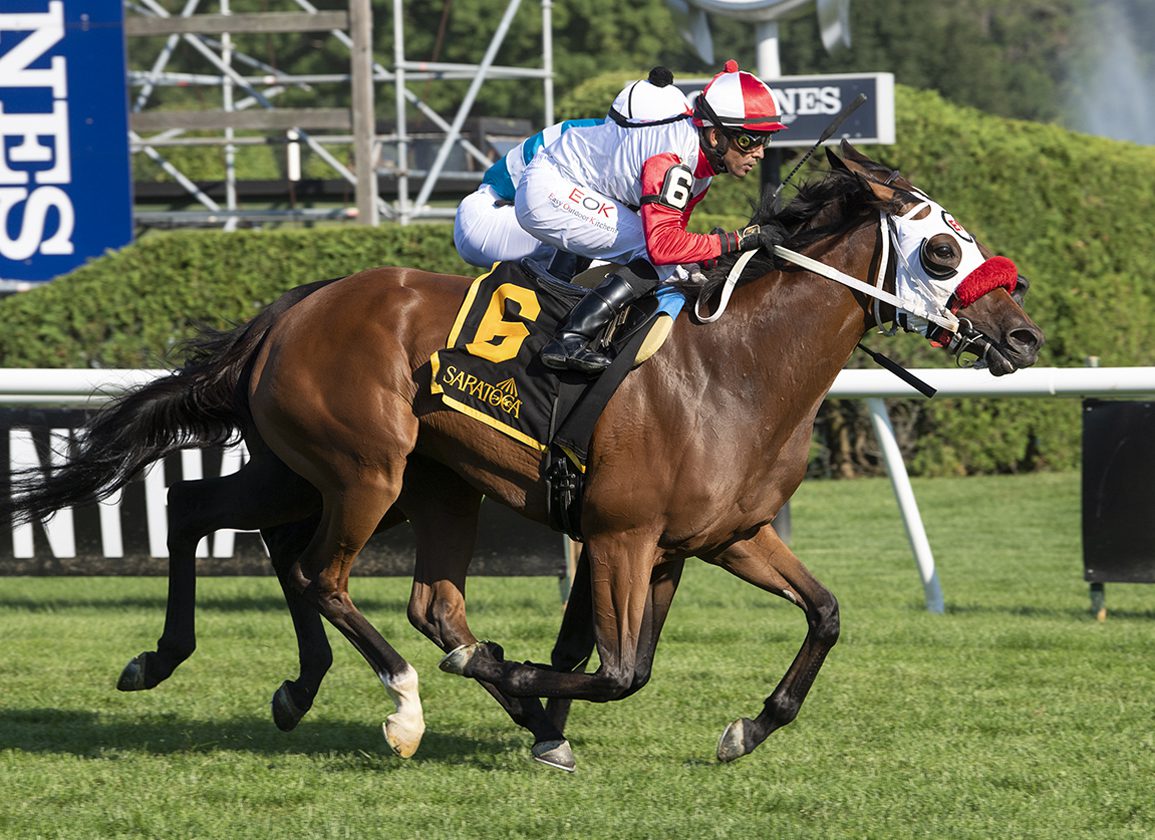 Dream Central gets the win in the Suzie O'Cain S. | Sarah Andrew

This week, Dream Central will return to stakes action on Thursday for the New York Stallion Series' Statue of Liberty S. The mile-long contest will feature a field of eight 3-year-old fillies. Dream Central has drawn post four and will race with Javier Castellano aboard this time around.

“She's been training well,” Fazzone reported. “Gary and Paul [Barone, assistant] have done a great job with her and it should be fun.”

During the race meet, Fazzone wakes up at four in the morning to handicap the day's card and stop by the Oklahoma training track to visit his horses before heading into the restaurant. While he and Sciacca have a running joke about which of them is really training Fazzone's horses, Fazzone said he has nothing but respect for all that Sciacca has helped Eddie F's Racing accomplish already.

“As owners, we just buy the horses,” Fazzone said before motioning to the shedrow behind him. “This here, what these guys do every day, Gary and his team have been so great. At the end of the day, you have to listen to your trainer. Once the gates open it's out of our control, but we're looking forward to it.”