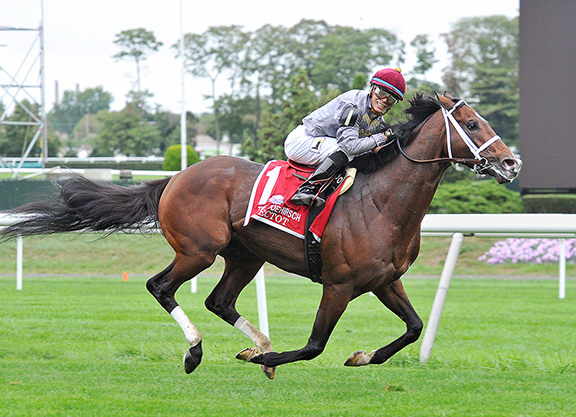 Most handicappers were ready to concede Saturday's GI Joe Hirsch Turf Classic Invitational to Flintshire, given his domination over this country's 10- and 12-furlong horses since his seasonal debut in June. But weeklong rains across metropolitan New York rendered the Widener turf course yielding, clearly not Flintshire's preferred going, and recent French import Ectot proved the chief beneficiary, earning himself a spot in the field for the GI Breeders' Cup Turf Nov. 5.

Winner of the G1 Criterium International at two, Ectot claimed the scalp of future GI Breeders' Cup Mile winner Karakontie (Jpn) (Bernstein) in French Group 3 company in early 2014 and won the G2 Prix Niel before finishing well down the field behind Treve (Fr) (Motivator {GB}) in the G1 Prix de l'Arc de Triomphe. Third in the G3 La Coupe in three 2015 appearances while still under the care of Elle Lellouche, the bay joined the Pletcher stable earlier this summer, finishing a close fourth in the restricted Lure S. over an insufficient 8 1/2-furlongs at Saratoga Aug. 6 and was exiting a nose defeat in a 12-furlong allowance upstate Sept. 4.

The closest to an on-pace runner in this quartet, Ectot almost defaulted to the front and Jose Ortiz put him to sleep on the engine, covering the opening quarter-mile in a leisurely, but honest :24.78, tracked by Flintshire's stablemate Money Multiplier (Lookin at Lucky). The race was won, for all intents and purposes, over the next six panels, which were covered in 1:15 flat, and Ectot was still traveling well within himself, while Javier Castellano was getting after the heavy favorite and the duo was into third as the field neared the stretch. But whereas Flintshire had been able to produce barnstorming finishes in his three prior races when he had his preferred ground, his turn of foot was decidedly more blunted by the easy going and Ectot was going away at the wire.

“When we got to the backside, he relaxed very well for me,” Ortiz explained. “When I passed the three-eighths pole, I looked and I saw Twilight Eclipse (Purim) three lengths behind me and I saw Flintshire in the clear, so I still had to run to win. When we got to the quarter pole, I saw Johnny all out and Flintshire was passing and I opened two lengths without even asking, so I thought I had a really good shot. When I asked him to go, he responded very well.”

Flintshire's trainer Chad Brown was taking the defeat in his stride and will press on to Santa Anita.

“We knew the risk going into the race running on soft ground. He has a poor record on it,” he offered. “I didn't see another option; I didn't feel comfortable going into the Breeders' Cup without a prep. So, we gave it a shot and it didn't work out.”

Pedigree Notes:
Ectot is the first North American black-type winner for his sire, who won the G1 Irish Derby and the G1 Prix de l'Arc de Triomphe en route to European Horse of the Year honors in 2005. He was third in defense of the Arc the following season. A half-brother to 2012 G1 St James's Palace S. upsetter Most Improved (Ire) (Lawman {Fr}), Ectot is out of a half-sister to GSW Albisola (Ire) (Montjeu {Ire}) and GSW & G1SP Johnny Barnes (Ire) (Acclamation {GB}). Ectot is a half-brother to a 2-year-old colt of this year named Najashee (Ire) (Invincible Spirit {Ire}) and a Galileo (Ire) colt foaled Feb. 12 of this year.