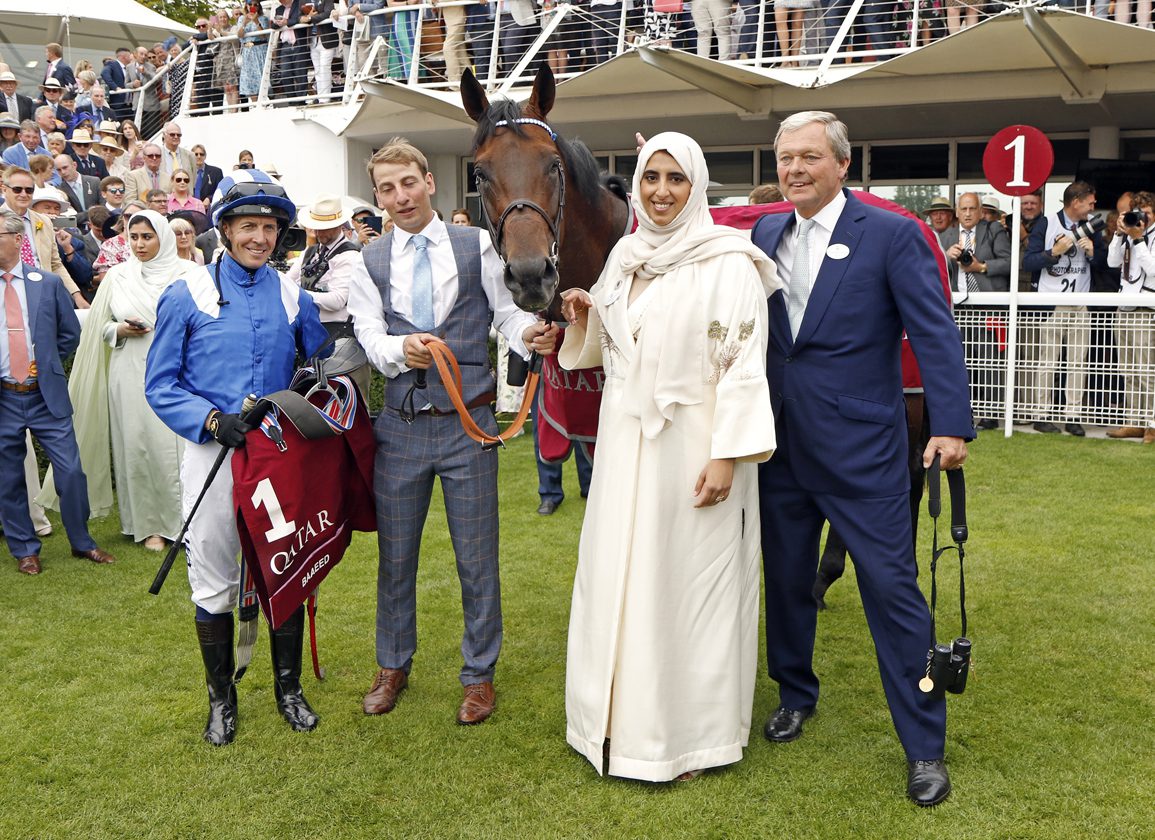 Ten years on from that momentous day when Frankel (GB) moved a nation, York's Knavesmire has a scenario fit to mark the anniversary as Shadwell's Baaeed (GB) (Sea The Stars {Ire}) goes onwards and upwards in the G1 Juddmonte International. Just as the great gift afforded to the late Sir Henry Cecil entered unknown territory traversing an additional two furlongs and 56 yards that afternoon, so too does the colt that has come to represent the bridge between the legacy of the departed Sheikh Hamdan and his daughter Sheikha Hissa. On paper, stamina beyond a mile is as of little concern as it was for Khalid Abdullah's deity, but after so many freakish displays at a mile it is his to prove. Luckily, the always cautious William Haggas is unconcerned on that score. “He just does what he needs to do, rather like his father, and I don't think the trip will be a problem,” he said. “We think he might be better at that trip and let's see what happens, it's what it's all about.”

Betting on the Juddmonte International is of no consequence this year, as it was in 2012 when all who gathered on York's expanse were there just to witness the passing through of the one of the modern racing greats. After the Southern tracks have had their fill, it is time for Shadwell's best performer beyond sprint trips for some time to grace the renowned Yorkshire venue and provide the county with the opportunity to bear witness to his prowess.

There is nothing in this flat, speed-favouring terrain that should hold any fears to a performer who has been able to explode into life on the undulations of Goodwood and Newmarket and over the stiffer concourse of Ascot. If anything, his effort in the May 14 G1 Lockinge S. at the similarly even track of Newbury was his most deadly to date and York could be his ideal playing field.

Where Are the Weaknesses?

William Haggas is right to point to the similarities between Baaeed and Sea The Stars, with the father and son identical in the way they could and can turn it on at any point. Bred to be a mile-and-a-half-plus horse, the current world leader is also armed with an abundance of fast-twitch fibres which have served him so well over a mile. His sectionals at Royal Ascot were astonishing, but there is going to be rain from Tuesday evening onwards and there is also the fact that two of his stablemates Maljoom (Ire) (Caravaggio) and Alenquer (Fr) (Adlerflug {Ger}) have returned dirty scopes in the last few days. Angus Gold is taking a step back from undue worry. “I've heard they've had two and a half millimetres and unless they have a three-hour storm, I can't see it is going to make too much difference to the ground and we'll take what we're given,” he said. “As far as I know, when I spoke to William last he's fine. They scoped him and he's clear. Like you and I though, if something is brewing, you're not going to perform at your best. So hopefully it is not, but until we know otherwise there's no point making a thing about that. So far, all the tests have been good and he goes there in as good form as we can have him.”

Twelve months ago, Prince Faisal's Mishriff (Ire) (Make Believe {GB}) was in domineering mood here for his finest hour on turf and, while his four subsequent runs have yielded only one up-to-standard effort, it could be that this track brings out the very best in him. Along with that, the 5-year-old has developed a tendency to give away ground at the start which almost certainly cost him the Eclipse and ruined any conceivable chance in the King George. Thady Gosden is keen to be part of the combined stress test for Baaeed in this new discipline. “It's interesting and Baaeed is obviously brilliantly talented. He relaxes well and you would be shocked if he didn't get the trip, but he's taking on top class mile-and-a-quarter horses and I think it's fair to say that it's a stronger division than the miling division at the moment,” he said. “Mishriff seems to be in similar form now as he was when he went to York last year. He ran a huge race in the Eclipse and was perhaps unlucky there. His work gives us a pretty good measure of where he's at and he's in very good form. Whatever happens, it's going to be an exceptional race.”

How Will It Play Out?

Stamina will be required on Wednesday, with Ballydoyle's High Definition (Ire) (Galileo {Ire}) on hand to try and draw the sting from his rivals on the front end as he almost did at The Curragh when narrowly denied in the May 22 G1 Tattersalls Gold Cup. That performance suggests the once much-vaunted 4-year-old is not too far below this level and if gifted too much of a lead may prove difficult to reel in at a track which has always favoured front-runners. Native Trail (GB) (Oasis Dream {GB}) would probably be best-served by being placed near the front, with his stride length particularly advantageous at this track. Trainer Charlie Appleby, who suffered a disappointing reversal on Sunday as Coroebus (Ire) (Dubawi {Ire}) dipped below his best in the G1 Prix Jacques le Marois, has a direct line to Baaeed through the G1 Sussex S. runner-up Modern Games (Ire) (Dubawi {Ire}). “Baaeed is top-class with an outstanding profile, who holds everything in front of him, but we feel we have the right horse to take him on and make a race of it,” he said. “Native Trail's work has been great. The condition of this horse is second to none. He is thriving, you can see that in him as an individual. You ask, and he delivers.”

With the St Leger just over three weeks away, the time is nigh for any latecomers on to the scene for the Doncaster Classic to show their wares. York's G2 Sky Bet Great Voltigeur S. is a select affair this time, with Godolphin looking to strengthen their hand having already enjoyed G3 Gordon S. success with the ante-post favourite New London (GB) (Dubawi {Ire}). Fellow Charlie Appleby trainee Secret State (Ire) (Dubawi {Ire}), a son of the demoted 1000 Guineas winner Jacqueline Quest (Ire) (Rock Of Gibraltar {Ire}) and half to the GI Breeders' Cup Juvenile Turf winner Line Of Duty (Ire) (Galileo {Ire}), has achieved the notable feat of winning the kind of 3-year-old handicaps at Royal Ascot and Goodwood that are hotbeds for future pattern-race performers. The re-opposing Deauville Legend (Ire) (Sea The Stars {Ire}), who was getting four pounds from him when a head second in the Royal meeting's King George V S. June 16, has since been runner-up under a penalty to New London at Goodwood but Appleby is keen to wait and see when it comes to Secret State's Leger credentials. “We are lucky to have New London, who is currently favourite for the St Leger, which has always been his target. As for Secret State, we will make a decision regarding his trip after the Voltigeur,” he explained. “There's a question mark over whether he would get a strong one-mile-six. We will see in time.”

El Bodegon Back On Home Soil

James Ferguson may have Deauville Legend, but he is also in the enviable position of saddling El Bodegon (Ire) (Kodiac {GB}) in the Voltigeur and any significant rain will aid his cause. Five of his last six starts have come in France, with wins in the G1 Criterium de Saint-Cloud and G3 Prix de Conde last term followed by placings in the G1 Prix du Jockey Club and G1 Grand Prix de Paris. “He hasn't won in England since Sandown and people forget what happens abroad,” his trainer said of the flagbearer, whose one outing in that period resulted in a deflating seventh in the G2 Dante S. here May 12. “His last two runs have been very solid and back up to the level we know of him. He is very tough and he proved last time out in the Grand Prix de Paris that he stays a mile and a half no problem. He has been good from day one, while Deauville Legend has been getting progressively better and better and at the moment the plans are for them both to end the season down in Australia and this is the perfect stepping stone for both of them.”

There is a fascinating renewal of the G3 Tattersalls Acomb S. before the big two races on day one, with Godolphin's TDN Rising Star Local Dynasty (Ire) (Dubawi {Ire}) in action just 12 days after his impressive debut over this seven-furlong trip at Newmarket. A relative of the sire's Yibir (GB), who came to the fore in the Voltigeur last year, and Wild Illusion (GB), he showed he was able to run fast in the closing stages of his racecourse bow but has no soft touch here. Even faster is the July 7 Doncaster maiden winner Mill Stream (Ire) (Gleneagles {Ire}), who gave Local Dynasty's TDN Rising Star stablemate Noble Style (GB) (Kingman {GB}) a scare also over six furlongs at Newmarket July 29. A half-brother to the speedy Asymmetric (Ire) (Showcasing {GB}) from the family of Wunders Dream (Ire) (Averti {Ire}), he could be a pure sprinter and this test will tell Jane Chapple-Hyam more.

The Acomb has at least three other juveniles who could conceivably shape up into Guineas types, with Juddmonte's Chaldean (GB) (Frankel {GB}) particularly appealing after beating three subsequent winners over this trip at Newbury July 15. Juddmonte racing manager Barry Mahon said of the Andrew Balding-trained 550,000gns half-brother to the G2 Mill Reef S. scorer Alkumait (GB) (Showcasing {GB}), “He is a horse that Andrew likes. This has been the plan since he won his maiden. He is quite a late foal, so he is still developing and hopefully there is a bit more improvement to come. He is not a big horse, but he is progressing and I would imagine in the second half of the season he is hopefully going to be rocking and rolling.” Edward Bethell has a big week ahead and it starts with Fiona Carmichael and Ballylinch Stud's exciting Oviedo (Ire) (Lope De Vega {Ire}), who showed the kind of gears needed for this level when scoring on his sole start over this trip at Doncaster July 21. One of a few with stamina in his pedigree, his dam is a half to two talents in Chriselliam (Ire) (Iffraaj {GB}) and Lope De Vega's Very Special (Ire).

Also in the mix for the Acomb is Highclere's July 16 Newbury six-furlong novice winner Hectic (GB) (Massaat {Ire}), an imposing Richard Hannon-trained colt running in the same colours as last year's surprise winner Royal Patronage (Fr) (Wootton Bassett {GB}). “I watched him work at the weekend and he worked very nicely and looked great,” Highclere's managing director Harry Herbert said. “It's a race we won last year with Royal Patronage and were second in the year before with Spycatcher–we know when you go there you're taking on some very highly-regarded rivals. We will throw him in the deep end and hope he runs well, certainly his home work has been impressive and his debut was outstanding when he made all at Newbury and went away again when they pressed him. He's always been considered a very nice horse and we're excited to see him move up to this level.”