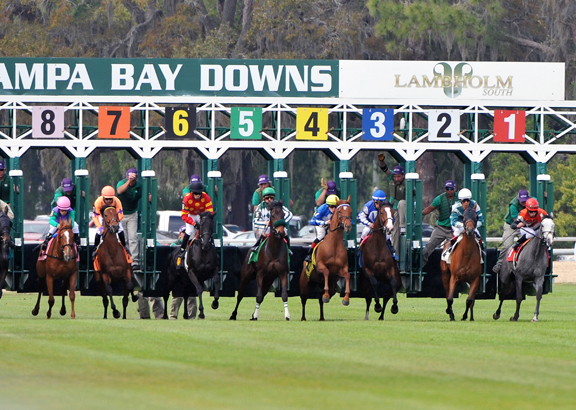 The 10th race at Tampa Bay Downs Sunday was a decent enough sprint stakes for Florida-bred fillies, but hardly the sort of race that seemed destined to make history. Yet the 6-9-4 result it produced could come up as the answer to a future trivia question, because the official order of finish from that race determined the nation’s first-ever daily lottery number draw based on a live sporting event.

The $2 quick-pick game, dubbed Win Place Show (recently rebranded from the parent company’s name, EquiLottery), just started a 90-day trial run at 45 retail locations in Lexington, Louisville, and northern Kentucky. A decade in the making, the concept is the brainchild of Brad Cummings, the founder and chief executive of a firm whose eventual goals include fusing the excitement of live horse racing with the convenience of buying a lottery ticket.

The stakes are high for Win Place Show–and by extension, for the sport as a whole–to hit initial Kentucky Lottery sales goals during the trial period, because Cummings told TDN that an eventual statewide rollout and a likely expansion to other states hangs in the balance.

“If we’re right, we get into the 3,000 stores in Kentucky,” Cummings said. “And on top of that there are six [other state] lotteries that are looking at this and saying if it’s successful in Kentucky, they want to bring it into their state. So the potential is there for hundreds of thousands of terminals across the country. What happens for horse racing when people can play this game at over 200,000 points of purchase? There are millions of people who would love our sport on a casual basis. Those are real dollars and real eyeballs watching a featured daily race every single day. That’s the real incentive here.”

The premise is simple: A lottery player buys a $2 ticket for the game and receives a randomly generated set of numbers corresponding to three horses for the day’s selected race. A QR code on the ticket enables the player to scan it on a smart phone and view the race live or on replay. Players win if the race results match three in a row, three in any order, or any two exactly.

Cash prize amounts are estimated for field sizes between eight and 14 horses. An exact match of all three (essentially hitting the trifecta cold), will likely pay between $250 and $1,800. All top-three finishers in any order will return around $10 to $80. A match of any two in exact sequence is good for a free ticket to play again. If one of your numbers turns out to be a scratched horse, you also get to play again for free.

Tickets are sold in 24-hour increments, and each day’s race is designed to go off around 5 p.m. Eastern. Essentially, Cummings and his team will be scouring entries 48 hours ahead of time looking for the fullest fields with the most favorable weather forecasts scheduled to go off during that time frame.

“We have 21 racetracks signed up right now. That number is growing,” Cummings explained.

In addition to providing marketing exposure for the sport, Cummings underscored that “there is also a revenue component. We pay a percentage of each ticket to the racetracks for what we’re calling a broadcast rights fee. So they’re getting paid for the usage of their video feed. We’re not asking racetracks to do anything differently than they’re already doing.”

Future enhancements to the website and mobile app could include the ability to buy the lottery tickets online instead of in-person, Cummings said. There are also plans in the works for an incentive system that could reward customers who bring losing tickets to a participating racetrack by allowing them to be redeemed for some sort of perk or freebie.

Cummings said he was not at liberty to reveal the specific sales goals that Win Place Show must reach, but he described them as “very achievable. It’s based on per-capita sales, and it’s a very fair metric that we’re being given.”

Still, Cummings said, he is making a direct plea for anyone who lives in the launch area or will be traveling to either Keeneland Race Course or Churchill Downs this spring to show support by purchasing some daily tickets. This list allows you to search for participating Kentucky Lottery retailers by zip code.

“The vision starts this week, and anybody who cares about the sport and wants to see it grow, I’d ask them to go out and buy tickets, and encourage others to do the same so that the launch can be as much of a success as possible,” Cummings said.

“In five years the potential is there for Win Place Show to be in 15 to 20 states,” Cummings summed up. “Horse racing has a chance to lead the way in an entirely new form of gaming that is a lottery game of pure chance based on a live sporting event. So I think that’s something that the industry should be proud is happening, and I hope the industry will fully embrace this as we continue to grow.”