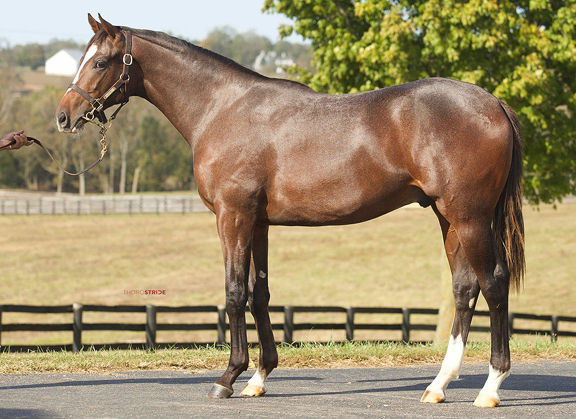 LOUISVILLE, KY – With the first Saturday in May just days away, TDN Senior Editor Steve Sherack caught up with the connections of leading GI Kentucky Derby contenders to get some of their 'Early Impressions.' In this edition, we check in with Hermitage Farm General Manager Bill Landes and Ocala, Florida, horseman Eddie Woods.

Known Agenda (Curlin) has really taken his game to the next level since adding blinkers for Todd Pletcher in two starts this term, headed by a powerful performance in the GI Curlin Florida Derby. The St. Elias homebred, out of GI Vanity H. heroine Byrama (GB) (Byron {GB}), RNA'd for $135,000 as a Fasig-Tipton Saratoga yearling. Byrama was acquired privately by St. Elias after RNA'ing for $725,000 at the 2013 KEENOV sale. With the COVID-19 pandemic throwing a wrench into the 2-year-old sales schedule last spring, the chestnut, originally ticketed for the canceled Gulfstream Sale with consignor Eddie Woods, was instead held on to by his breeder Vinnie Viola and taken to the races. Last year's GI Kentucky Derby/GI Breeders' Cup Classic winner and Horse of the Year Authentic was a graduate of Woods's training program. Woods also trained and pinhooked 2008 Derby winner Big Brown ($60,000 FTKOCT yearling turned $190,000 KEEAPR 2yo).

“This guy early on was beset with gastrointestinal issues–maybe three days of age–and then again in the summer of his foal year, and had to go to the clinic two times for treatment, and therefore he was setback, physically. When we got him straight, Mr. Cox had already decided to disperse at Keeneland November, but was gonna take the worst of it with this guy pushing him there. We were all in agreement, and I said, 'Let's just pass and I'll get him sold.' I tried to sell him privately and then eventually the Fasig February deadline came and we had to find a home for him and that's where we were.

I can tell you this, from that October of his weanling year, however, he was not going backwards, he was progressing, but he was just behind. But every step he was making was forward. And that's what I told the Felds when they bought him [at Fasig February] and that's what I told everybody that I tried to sell him to, that he was heading the right way that his gastrointestinal issues were taken care of.

His record speaks for itself, he really hasn't looked back from that fall. Everything has been positive and forward. I told the Felds after they bought him, 'You guys stole another one.' He was always a solid colt.”

Looking back now, did Hot Rod Charlie remind you of his now-famous half-brother Mitole at all?

“It was too early to tell. Mitole was pretty straightforward. We didn't have this horse long enough for me to make that impression. To the people that I tried to sell Hot Rod privately to, I did say that he had a half brother that looks well above average.

I'm sorry he missed it. We sold Hot Rod in February and Ed died in March. I'm sad about that.” –Bill Landes

“He was a really laid-back horse–a very quiet, good-moving horse. He was pointing to the [Gulfstream] sale, but it was questionable whether he had enough speed to be a proper 2-year-old sale horse. I don't know if the 2-year-old sales would've been the ideal environment for him. But he always moved good and trained good. He just lacked the little bit of sharp toe. When the sale was canceled, he went into a different program and just went along nicely.

I think in this year's Derby, every one has a chance to be a Derby horse. It's that kind of race. He'll run a good race. He'll be closing and he'll get the trip, which I suspect a lot of them won't. The faster they go, the better off he'll be.

It's great for our program and our team. The one consistency we've seen with the Derby horses and the horses that run well in the Derby is that they're really classy acting. They have great composure and they handle all the turmoil that comes with it– prepping for the Derby and the whole day in itself.

He's incredibly laid back–I spoke with Todd [Pletcher] at one of the 2-year-old sales about him and he said he's the same now as he was then.” –Eddie Woods