Home » Archive » Shared News » E-Trakka Arrives in America–And With It, An Enthusiastic Disciple of Data

E-Trakka Arrives in America–And With It, An Enthusiastic Disciple of Data 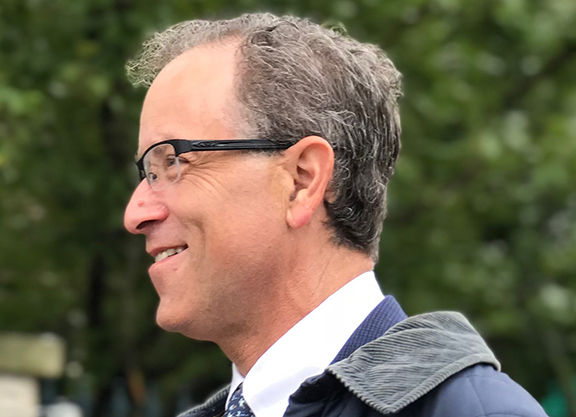 Greg Fox, a Kentucky-based veterinarian who was also a MGSW Thoroughbred trainer for a stint in the mid-2000s, can trace his fascination with the science behind fitness to his days as a kid growing up near Boston, when he first figured out he was not genetically or physically destined to become the great basketball player he envisioned he would be.

Pro basketball's loss just might end up being horse racing's gain, because for the past three decades Fox has committed himself to a better understanding of the Thoroughbred athlete through a combination of horsemanship, veterinary medicine, and a disciplined application of on-track exercise testing.

Based out of Lexington but with clients in other major United States racing jurisdictions, Fox runs Thoroughbred Performance Diagnostics LLC, which offers pre-purchase cardiac analytics at major auctions and dynamic exercise physiology testing at training centers and racetracks.

His on-track diagnostics are derived from data gleaned by the E-Trakka fitness monitoring system pioneered in Australia in 2006. It records a horse's heart rate, speed, stride length, and sectional times, then automatically uploads that information to a cloud-based data storage and viewing program.

Fox's initial involvement with E-Trakka was as a user of its specially designed saddle blanket that records and transmits the data. But after a visit to Australia last December to learn more about the system, he was impressed enough to want to become the firm's first North American representative for the product.

“Have you ever been snorkeling? For me, this process was like the first time you look under the water with a diving mask on,” Fox told TDN. “You see things that are magnificent and important that are not evident from the surface. And when you start analyzing the dynamic information associated with horses in training, the differences between horses, and the changes that an individual horse goes through during its career, that's empowering.”

Fox's respect for what can be done with previously hard-to-come-by data also goes back to his childhood. The son of a biology and genetics professor at the Massachusetts Institute of Technology, he studied human exercise physiology as an undergrad before attending the Tufts University School of Veterinary Medicine. He eventually practiced on the Maryland and New York racing circuits, then took out his own training license in 2004.

Between 2005 and 2010, Fox and his wife, Jamie, operated Fox Stables LLC, with an emphasis on trying to find out “if monitoring a horse's fitness could have an impact on the way horses were managed on a practical level.”

Putting some of his theories to the test yielded not only a wealth of data, but Fox's approaches helped the stable's trainees produce $2.5 million in earnings and seven graded stakes winners, including Tizdejavu, Slew's Tizzy, and Battle of Hastings (GB).

Fox then returned to veterinary practice, working for six years at Payson Park in Florida where his clients included Shug McGuaghey, Bill Mott, and Christophe Clement.

Now back in Kentucky after his E-Trakka revelation, Fox said, “My goal is not just to be the guy who sells it, but to help analyze the data for the connections. Because I really believe that is part of the reason this type of data has not been embraced in horse racing–a lot of people are not really in a position to commit the time to learn how to analyze the data.”

Each E-Trakka saddle pad contains two electrodes, one on the girth and another on the right side of the horse under the girth. Once it's fitted to a horse prior to a workout and the horse's name is selected from a drop-down menu, it automatically starts monitoring the heart rate and connects via GPS to record a training session that gets transmitted via cellular signal to a cloud storage device.

“Basically, all you have to do as a trainer is use the pad,” Fox explained. “You tack the horse up with this very well-made, military-standard, very reliable system that distinguishes it from other systems that are out there. It then provides an incredible amount of detailed information of the work.”

Fox added that an owner or trainer watching from somewhere else can see a video representation of the horse going around the track as it goes through a workout, complete with all of the stats as they are collected in real time.

“Once you understand the typical heart rate response of a horse that's in training, you're looking for positive changes and you're hoping to avoid negative changes,” Fox said. “For example, if you work an evenly-paced half-mile in :50 with a maximum heart rate of 210, you might expect recovery to be 120 beats per minute. And as the horse gets fitter, it might go faster with the same recovery. Or it might do the same workout with a much faster recovery.”

Each E-Trakka blanket unit costs in the ballpark of $3,000. Fox said there are ongoing costs after the first year to pay for cellular signal usage (about $35 monthly).

“What I do is I offer a month of unlimited analysis when you get involved,” Fox explained. “So if after a month, you want to keep me on to analyze the data, we figure out a fair way of building that relationship Or you can go it alone, and there's lots of educational information on the E-Trakka website to learn how to analyze and follow your horses' progress.”

A larger racing stable would probably want more than one unit. Asked how many saddle blankets a 20-horse outfit might need, Fox explained it this way:

“In Australia, Chris Waller, the leading trainer, has used the system for many years. And he has 15 of these in use at several different racetracks. If you have a 20-horse stable, you'd like to have four blankets, probably, so that on work days you can have one set tacked up while the other's on the track.”

That explanation brings Fox to another point—practicality. He said that, as a former trainer, he knows it can be a hard sell if a data-gathering system is too much trouble to implement seamlessly.

“That's number one—this cannot be unreliable or time-consuming under the stress of morning training,” Fox said. “Trainers in general are under an incredible amount of time pressure. They're very reluctant to add moving parts to what is already a very complex process in the morning.”

Fox said another advantage of E-Trakka as a diagnostic tool is that it provides one of the few ways of measuring a horse's athleticism when the animal is not at rest.

“The true relevance of a way a horse is going can only be truly interpreted by the stress that the horse is experiencing in movement,” Fox said.

Asked why trainers in America seem reluctant to embrace non-traditional exercise diagnostics and data as a whole, Fox paused in thought before answering.

“The value of this information has not been effectively shared with the Thoroughbred industry,” Fox said. “This kind of data is first and foremost an opportunity for a trainer to commit to a greater and more detailed understanding of their individual athletes with the goal of doing everything humanly possible to avoid overtraining a horse or training a horse that is hiding an infirmity that is clinically important.

“It's a challenge, But once people become comfortable with the data, they are very grateful to have access to it,” Fox continued. “What I tell people is that what this information does is it either challenges your opinion or validates your opinion on how the horse is going. If it validates it, that's great. But if it challenges it, it's always best to take a pause and think about it.”

To sum up, Fox was asked to fire up his crystal ball and predict what E-Trakka's market penetration in America would look like in five years.

“This will be an embraced piece of technology that trainers will use. How many? I don't know,” Fox said. “But I hope that it becomes normal to see this type of device on horses in training. Because it's one of those efforts that absolutely can cause no harm, and it can provide valuable insights into horses' well-being and their health, and to allow their connections to understand the limitations and the potential of their horse.

“The goal of any owner or trainer is to answer the questions, 'What kind of athlete do I have, and how can I best and most ethically and effectively allow this individual to reach their potential?'” Fox said. “And that's the whole story of what we're trying to do.”