Dynamite On The Downs 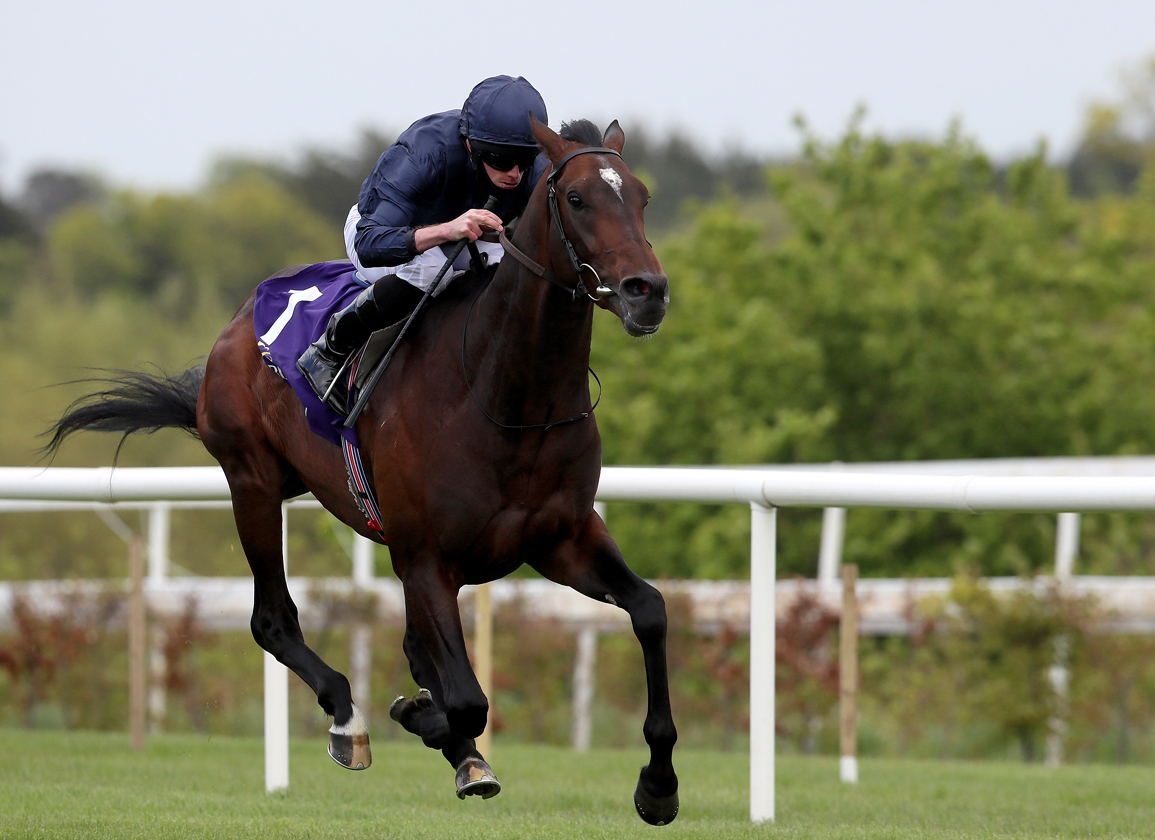 It has become custom for some to yearn for the glory days of the Epsom Derby, when the blue riband of the English turf sat proud on its Wednesday slot dominating the consciousness of the London area. While it has fallen some way short of its past standard as a national treasure, one of the factors in its relative demise has been lack of competition but this year's Cazoo-sponsored renewal stands up on that score at least. In fact, with all its converging plots there has not been as exciting a Derby as this for some time and the fact that Ballydoyle have narrowed their focus to just one lends it even more gravitas. Will 'TDN Rising Star' Bolshoi Ballet (Ire) (Galileo {Ire}) mark the 20th anniversary of his sire's triumph with a performance worthy of the extraordinary burden of responsibility placed on him? Is the other 'TDN Rising Star' John Leeper (Ire) (Frankel {GB}) able to mark his anointment as tribute horse with glory in the prize his namesake plundered with Shirley Heights (GB) and Erhaab? Can his sire get off the mark in the race he was steered away from? Can Newmarket reimpose itself on the Derby again? Will it be another grand title-bearer in Mac Swiney (Ire) (New Approach {Ire}) who prevails? Will Sheikh Hamdan's legacy be championed by Mohaafeth (Ire) (Frankel {GB})? How will Friday's non-forecast excessive rain affect the outcome?

Beginning with Bolshoi Ballet, it is safe to say that Aidan O'Brien has not delivered as obvious a Derby talent since 2009 when Fame and Glory (GB) (Montjeu {Ire}) went through the G3 Ballysax S. and G2 Derrinstown Stud Derby Trial with similarly authoritarian poise. Before him, Galileo, High Chaparral (Ire) and Yeats (Ire) also took that “old school” route with injury interjecting to stop the last of that trinity from following up in this prestige event. Bolshoi Ballet has the look of his sire–who also went it alone in 2001–about him and the dramatic show of faith that his team have placed in him speaks volumes. “He was always going to have those two races in the spring after travelling as a 2-year-old and he's very uncomplicated and relaxed, stays and quickens,” O'Brien said. “He has a very good mind and does everything right. He's happy to sit in or make the running–that's the way he's always been. You're never sure about anything and it is a new track for him, but Leopardstown is left-handed. Obviously it's not as extreme as Epsom, but you have to quicken and you have to go left and down the hill and up the hill and all that kind of stuff. We always thought he would stay, but he's a very good-moving horse with plenty of class and speed so the rain is not ideal. He did handle it okay in France last year and didn't fold up, so hopefully he'll be able to cope with it. It's another chapter in his career, so it will be interesting and we'll learn a lot from it.”

Remarkably, Ryan Moore has not ridden the stable's last three Derby winners and must have been downhearted to miss out to Frankie in both the English fillies' Classics so far, but there is no danger of being on the wrong one this time. “I don't see the extra two furlongs here being a problem and he is just a straightforward and very classy colt. Straightforward is what you want around here, while his draw in nine is just fine. If he runs to his form and the level we expect, then he should be going close but this is a Derby and you can't be complacent, especially against a whole host of unexposed horses as he faces here.”

Just a cursory glance at the racing results from March to now show that Ireland has a genuine edge over Britain across the board under both flat and National Hunt codes and therefore it is no surprise that Mac Swiney (Ire) (New Approach {Ire}) and Bolshoi Ballet enter this Classic as officially the two top-rated colts. Mac Swiney upset his own stable's G1 2000 Guineas hero Poetic Flare (Ire) (Dawn Approach {Ire}) in the Curragh equivalent a fortnight ago and did so coming off a far-from-ideal preparation having scoped dirty after his below-par return in Bolshoi Ballet's G3 Derrinstown Stud Derby Trial at Leopardstown May 9. Friday's prolonged rainfall will have been a welcome sight to Jim Bolger, with the homebred seeming to excel on easy ground and he has everything in place for a big effort now. “You know how well he was a couple of weeks ago and he came out of that race very well and he's been fine since,” his owner, breeder and trainer said.

It is 27 years since the Shadwell silks were carried to success here, with the John Dunlop-trained Erhaab swooping five years after the great Nashwan had opened the operation's account. There have been few more visually stunning winners than the William Haggas-trained Mohaafeth in the May 1 Listed Newmarket S., an early prep which last saw the Derby hero in 1985 as Slip Anchor (GB) took it in en route. One of a Frankel trio with live chances, his five-length success in that four-runner contest in which at least two rivals under-performed is of either major or little significance and it will be impossible to tell until they have passed the post here. What he does have is a beautiful pedigree and temperament and all of the potential it is possible to possess. It is fair to say that of all the main principals, Mohaafeth was the one with connections least wanting this type of ground and their sense of anticipation has been dampened.

Ed Dunlop may not have trained an abundance of high-profile horses throughout his career, but most of his profession can only dream of having a Ouija Board (GB) (Cape Cross {Ire}) or Snow Fairy (Ire) (Intikhab). That the former has already produced a Derby winner in Australia (GB) only means that the onus on Snow Fairy is greater as her John Leeper enters this renowned theatre. When giving the dam's first colt his title, Cristina Patino was exercising the kind of prescience that graced the late Khalid Abdullah as he bestowed the name Frankel on his greatest Thoroughbred prize. John Leeper has come though the initial stage of his career fully justifying his owner-breeder's bold call and his deceptively impressive win in the May 15 Listed Fairway S. at Newmarket has only served to augment the level of enthusiasm surrounding the handsome homebred.

“It is probably one of the more interesting stories of the race. Having a horse named after my father is very exciting and it creates a little bit of pressure for everyone, but at the moment the horse has no idea there is any pressure on him so hopefully we can enjoy it,” Dunlop commented. “Of course it is quite emotional as well and it would be a great day if he could go on and win the Derby. The trip should be up his street, because his mum won the Oaks. I'd be surprised if there was any problem with the trip.”

Frankel's prospects of a first Derby winner are significantly boosted by the presence of Godolphin's Hurricane Lane (Ire) (Frankel {GB}), who comes here as the winner of York's G2 Dante S. May 13. Although the importance of that extended 10-furlong prep has tended to wax and wane over time, the subsequent exploits of its winners Golden Horn (GB), Authorized (Ire), Motivator (GB) and North Light (Ire) and of the beaten Workforce (GB) have upheld its reputation as a blue riband trial of significance. Hurricane Lane showed a tenacity there which will stand him in good stead, especially with Friday's rain coming in the nick of time for the unbeaten chestnut. “As we saw in the Dante, his best work was in the last couple of hundred yards. Everything bodes well to step him up to a mile and a half and it might bring about further improvement,” Charlie Appleby said. “He lacks racing experience, but he has done well since York and one of his great attributes is he is laid-back. Sometimes, the occasion can get to horses on Derby Day but I don't think it will be any problem to him. I thought he showed character in the Dante. He's a colt you can put anywhere in a race, so he should adapt to any tactical moves.”

With the drastic change in the going, Sheikh Mohammed Obaid Al Maktoum's Third Realm (GB) (Sea the Stars {Ire}) and Godolphin's Adayar (Ire) (Frankel {GB}), who were first and second in the May 8 Lingfield Derby Trial staged on soft ground, come into play. It is also a boost to Teme Valley's G1 Criterium de Saint-Cloud winner Gear Up (Ire) (Teofilo {Ire}) who was fifth in the Dante, and to Godolphin's G3 Autumn S. winner One Ruler (Ire) (Dubawi {Ire}) who was 3/4-of-a-length second to Mac Swiney in the G1 Futurity Trophy on heavy ground in October.

Third Realm's trainer Roger Varian said, “He's not a big horse, he's a small-to-medium colt. He's very well-balanced, he's got gate speed and I'm quite confident he's going to get the trip. He's versatile, he can relax in behind horses and has shown a turn of foot. He's pretty straightforward and I think he's the type of horse Andrea [Atzeni] could put anywhere, which is comforting, going into a race like this.”

Appleby said of his other duo, “One Ruler had a very good two-year-old profile. He was never out of the first three in five starts and the form with Mac Swiney, who recently won the Irish 2,000 Guineas, is very solid. I am confident he will be one of the last to come off the bridle. The trip is a big question mark, but if he is going to get a mile and a half he has got a good chance of getting it around Epsom. Adayar gained valuable experience in the two trials, particularly at Lingfield, where he fought on well. He will see out the trip really well. He is lightly-raced and with maturity will be a nice type. Placed in two Derby trials, he is worthy of his place in the field.”

The two supporting races, the G3 Princess Elizabeth S. for fillies and mares, and the G3 Diomed S., take place over an extended mile and in the latter Juddmonte's Maximal (GB) (Galileo {Ire}) will provide a last clue ahead of the main feature. Second to Hurricane Lane in a 10-furlong conditions event at Newbury Apr. 16, the Sir Michael Stoute-trained homebred had Tasman Bay (Fr) (Le Havre {Ire}) back in third on that occasion and that rival went on to be second to John Leeper in the Fairway. A son of Frankel's half-sister Joyeuse (GB) (Oasis Dream {GB}), Maximal has his own agenda to work to and despite a few reversals he remains a colt of importance to his breeding operation dropping back in trip.