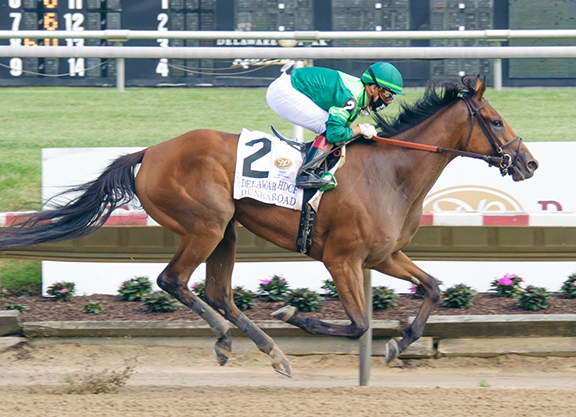 On a day when Chad Brown secured his 100th and 101st Grade I victories, Dunbar Road–already a Grade I winner herself–added to the haul in an event that was downgraded from highest-level status a couple years ago. Saving all the ground tucked just behind the speed early, the prohibitive favorite split rivals under confident handling heading for home. Saracosa tried to shadow that one's move, but Dunbar Road simply outclassed her competition to win geared down by as much as she pleased.

An eight-length debut winner at Gulfstream last March, Dunbar Road was a close second in the GII Gulfstream Park Oaks 27 days later. Excluded from the GI Kentucky Oaks, she cleared her '1x' at Belmont at the end of May and was a shoe-in winner of that track's GII Mother Goose S. a month later. She had a similarly easy time of it in the GI Alabama S. over 10 furlongs in the Saratoga slop in August, but settled for third behind Blue Prize (Arg) (Pure Prize) and Elate (Medaglia d'Oro) first time against her elders in the GI Juddmonte Spinster S. at Keeneland Oct. 6. She was fifth behind Blue Prize in the GI Breeders' Cup Distaff Nov. 2, and returned with an easy victory in Churchill's Shawnee S. May 23.

Dunbar Road is one of a number of recent graded performers to stamp Bernardini as one of the most coveted broodmares sires of the moment, and she was followed home Saturday by two daughters of that Darley stalwart. She is the granddaughter of SW Private Gift, a half-sister to MGISW Secret Status, by Bernardini's sire A.P. Indy. Gift List's last reported foal is the unraced 3-year-old filly On the Good List (Speightstown), who sold to Repole Stable for $230,000 at KEENOV '19.