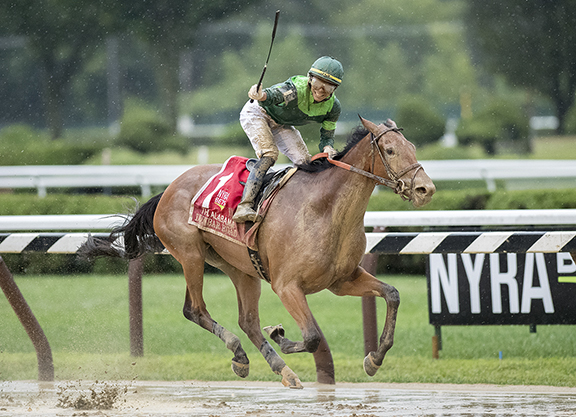 Peter Brant's Dunbar Road (Quality Road) continued her upward trajectory with a powerful victory in Saratoga's prestigious GI Alabama S. Saturday over a track turned sloppy by a late afternoon storm that blew in at the start of the race prior.

Favored at 8-5 while trying 10 furlongs for the first time here, the bay broke sharply from the one-hole and was shuffled back a bit under Jose Ortiz to run near the back of the tightly bunched group as Ulele (Candy Ride {Arg}) and Champagne Anyone (Street Sense) traded blows through opening splits of :24.14 and :48.97 with Lady Apple (Curlin) breathing down their necks. Ortiz and Dunbar Road continued to bide their time as three-quarters went up in 1:13.43.

Recent GI CCA Oaks runner-up Point of Honor (Curlin) began to make her move entering the far turn and Ortiz gave his mount the signal to go after her. Dunbar Road readily responded, ranging up six-wide outside of the 2-1 second-choice. Champagne Anyone and Ulele threw in the towel at the top of the stretch and Street Band (Istan) attempted to run with the top two on the fence. However, Dunbar Road proved far too good for either Point of Honor or Street Band and easily blasted clear of that duo to score yet another impressive victory. Point of Honor and Street Band battled stride-for-stride to the wire with Point of Honor out-nosing the GIII Indiana Oaks victress on the line. It was the third straight Alabama win for Ortiz, who took the 2018 renewal with Eskimo Kisses (To Honor and Serve) and the 2017 edition with Elate (Medaglia d'Oro).

“I was actually expecting to be more forwardly placed,” said winning trainer Chad Brown, who also saddled Regal Glory (Animal Kingdom) to a dead-heat win in the GII Lake Placid S. “I told Jose [Ortiz] with the lack of pace in the race, and the change in track conditions, that I'd be comfortable on or very close to the lead. I didn't want to take any chances. It wasn't how I would have drawn it up. We got shuffled back early and I really wasn't certain down the backside, with how far back she was, that we would win from there. She was just so much the best today. She was able to overcome everything.”

The conditioner added, “It's very special to win our first Alabama. The Alabama and the [GI] Travers are the two biggest races here and to win one of them is very special.”

“I was hoping to go to the lead, but the other horses broke well too and I just had to sit into the first turn, but she relaxed really good,” said Ortiz, who also piloted Brown's undefeated Guarana (Ghostzapper) to victory in the CCA Oaks last month. “At the five-eighths pole, I started working my way out and followed Javier [Castellano] through the turn. It was a little wide but I didn't want to be a hero and try to split horses. I felt like I had a lot of horse. I felt like a winner from the five-eighths pole, the whole way home. She's special. We knew the mile and a quarter would help her.”

Romping by 8 3/4 lengths on debut at Gulfstream Mar. 3, Dunbar Road came up a half-length short of the re-opposing Champagne Anyone as the favorite in the GII Gulfstream Park Oaks Mar. 30. The $350,000 KEESEP buy returned to winning ways with a 5 1/2-length drubbing of allowance company at Belmont May 30 and followed suit with a win in that venue's 1 1/16-mile GII Mother Goose S.

Dunbar Road is the 11th Grade I winner for her top sire Quality Road and she is bred on the same Quality Road/A.P. Indy cross that produced MGISW filly Bellafina. Her broodmare sire Bernardini is also the broodmare sire of runner-up Point of Honor. Brant looked to be trying to go back to the well at the recent Fasig-Tipton Saratoga Sale, where he bought a pair of yearling fillies by Quality Road (Hips 46 & 47), including one out of a Bernardini mare. The White Birch Farm principal was also active at Arqana Saturday, purchasing a Le Havre (Ire) filly for 500,000 euros.

Dunbar Road's dam Gift List is a daughter of SW Private Gift (Unbridled), who is a half-sister to GI Mother Goose S. and GI Kentucky Oaks victress Secret Status (A.P. Indy); and MGSW Alumni Hall (A.P. Indy). A half-sister to MSW & GSP Secret Someone (A.P. Indy), Gift List produced two winners from two foals of racing age. The 11-year-old mare has had just one foal since Dunbar Road, the juvenile filly On the Good List (Speightstown) and she was bred to Uncle Mo this spring.