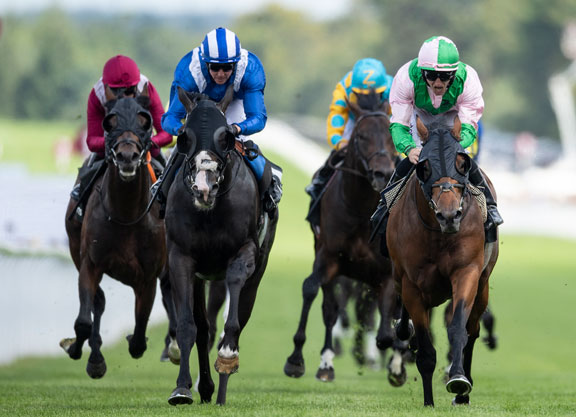 Finding some progression of late, Fitri Hay's Duke of Hazzard (Fr) (Lope de Vega {Ire}) emerged from a roughhouse renewal of Goodwood's G3 Bonhams Thoroughbred S. with a career-best to justify 3-1 favouritism. Last seen beating Momkin (Ire) (Bated Breath {GB}) in the Listed Sir Henry Cecil S. over this mile trip at Newmarket on July 11, the bay was reserved early by PJ McDonald and despite being stopped in his run passing the two-furlong marker regained momentum to reel in Turjomaan (War Front) inside the last 100 yards for a half-length success. “He was the horse I was most looking forward to riding this week, but it was not a nice race to ride in at all,” the in-form jockey said. “The pace was very slow and in the middle part of the straight it got tight, but I was lucky I was travelling well and things have been falling right for me this week.”

Signing off a decent 2-year-old campaign with success in the Listed Prix Isonomy at Deauville in October, Duke of Hazzard returned to be third in the G3 Prix de Fontainebleau at ParisLongchamp on Apr. 14 before finishing fifth in the G1 Poule d'Essai des Poulains back over that track and trip on May 12. Seventh under top weight in Haydock's Silver Bowl H. 13 days later, he was fitted with blinkers after running fifth in the June 22 G3 Jersey S. over seven furlongs at Royal Ascot and they worked the oracle at Newmarket and again here.

Trainer Paul Cole, who was such a force at this meeting in former years, thinks that the headgear has had a settling effect. “He had a bit of a seedy toe, which we didn't know was there for a long time and he was getting a bit nervous–it was like having a drawing pin in your foot and it may have made him a little bit careful,” he explained. “He's not ungenuine and we put the blinkers on to put the fire back into him. We were going to try and do a bit of a Too Darn Hot and cover him up and pounce here and the rider is in top form, so I was quite confident. He quickened up really well and was full of running at the finish. The plan beforehand was to go to Deauville in two weeks' time [for the Aug. 17 G3 Prix Daphnis], but I'll have a chat with the manager and owner and see. He's in tip-top form and for me today he had everything covered. He's got that turn of foot.”

Duke of Hazzard is the first foal out of a winning half-sister to the G1 Racing Post Trophy-winning sire Palace Episode (Machiavellian) and to the dam of the G2 Debutante S. scorer Laughing Lashes (Mr. Greeley), who was also second in the G1 Moyglare Stud S. and third in the G1 Irish 1000 Guineas. From the family of the sires Tejano Run (Tejano) and More Royal (Mt. Livermore) and the champion Lady Eli (Divine Park), she has a yearling filly by Teofilo (Ire) and a 2019 filly by Siyouni (Fr) to come.