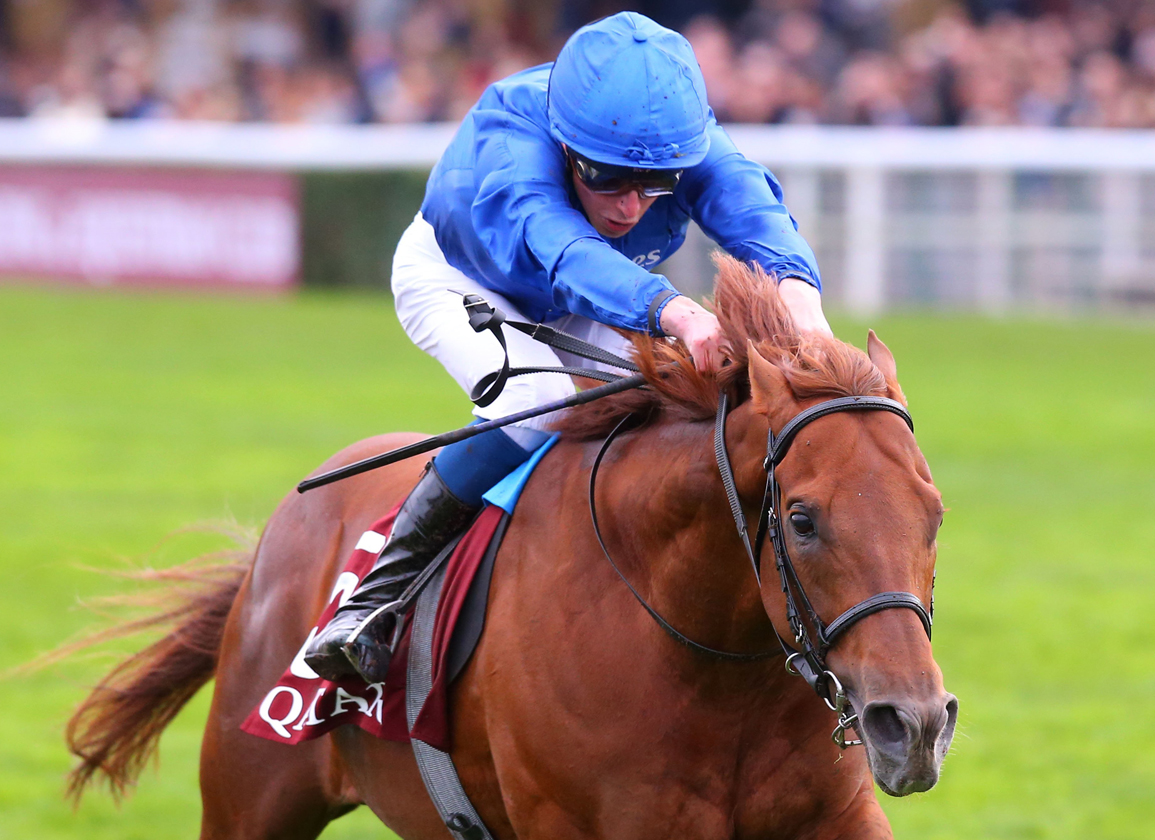 Charlie Appleby had pencilled in ParisLongchamp's G1 Qatar Prix de la Foret as an end-of-season target for Godolphin's 'TDN Rising Star' Space Blues (Ire) (Dubawi {Ire}) since 2019, but met with one setback after another at a vital juncture in recent seasons and prior engagements were not fulfilled. Scroll forward to 2021 and the 5-year-old chestnut delivered a performance of sheer brilliance to make up for previous absences and won going away in style at the end of the seven-furlong test. Space Blues's 2020 season was brought to a premature close after winning Deauville's G1 Prix Maurice de Gheest and he continued in similar vein when annexing Riyadh's valuable Turf Sprint in his first start this year. Unplaced when contesting Meydan's Mar. 27 G1 Al Quoz Sprint and Goodwood's July 27 G2 Lennox S., he went postward as the crowd's 7-2 favourite for this date with destiny coming back off an impressive score in York's Aug. 21 G2 City of York. Rider William Buick employed patient tactics after an alert getaway and settled his mount into a smooth rhythm towards the back of a strung-out field. Inching ever closer in the straight, Space Blues was last to come off the bridle after the cutaway and quickened smartly inside the final furlong to easily outpoint the prominently ridden Pearls Galore (Fr) (Invincible Spirit {Ire}) by two lengths. Japan's Entscheiden (Jpn) (Deep Impact {Jpn}) fared best of the remainder and finished 3/4-of-a-length back in third.

“We saw how he was at York, he's definitely back to his best and I'm delighted,” said Charlie Appleby after bookending the weekend stakes extravaganza with winners. “We took it a bit easy with him in the Spring and he came out on soft ground at Goodwood. He needed that a little bit and then went to York where I thought he was fantastic. I have been trying to get him to this race for the past three years and we put him bubble wrap, so to speak, after York and protected him. He worked last week and electric so I was confident, apart from the ground being a bit testing, coming into today. I told William [Buick] to not get drawn too far back, but he's got all the confidence in the world and rode with oodles of it. William filled him up in the straight and, once he pressed the button, there's one thing this horse can do and that's produce an electrifying turn of foot. That's just what he did and he put the race to bed. It's been a great weekend and I'm delighted for the whole team.”

As a career in the breeding shed awaits, Appleby indicated a Stateside swansong at Del Mar might now be on the agenda for Space Blues. “This, potentially, is his last year in training and he deserves to take up stud duties when the time comes. We might just give him one more roll of the dice in the [GI] Breeders' Cup Mile. He'll travel around there [at Del Mar] and, with a half-decent draw and a bit of wind behind him, he might be alright.”

“He's just a machine and one of my favourite horses,” added Buick. “He's generous, easy to ride and has a lot of class. With him, you just have to sit back and wait for him to deliver his finishing kick. The Breeders' Cup Mile is a two-turn race and he's adaptable enough to do well there.”

Dual Group 3 winner Pearls Galore was narrowly denied in last month's G1 Matron S. at Leopardstown on Irish Champions weekend and another turn in the spotlight yielded another runner-up finish at the highest level, albeit in more clear-cut fashion this time around. “Pearls Galore put in a magnificent effort and the only one to beat her is a very good horse,” said Haras de Saint Pair's racing advisor Crispin de Moubray. “She deserves to win a Group 1 race one day and it's up to Monsieur [Andreas] Putsch to decide whether she stays in training next year. It's a great story as he placed his trust in Paddy Twomey, and the reward has been two Group wins and two Group 1 seconds. Paddy Twomey is a great trainer.”

Koji Maeda's Japanese stakes scorer Entscheiden took a useful sighter when fifth over course and distance in last month's G3 Prix du Pin and benefitted from that prior experience to claim third at odds of 45-1. “The horse had already run well on a soft track in Japan, he loved the ground here and gave his all,” said rider Ryusei Sakai. “I believed that the race was there for the taking at the first winning post and he really proved courageous in the run to the line.”