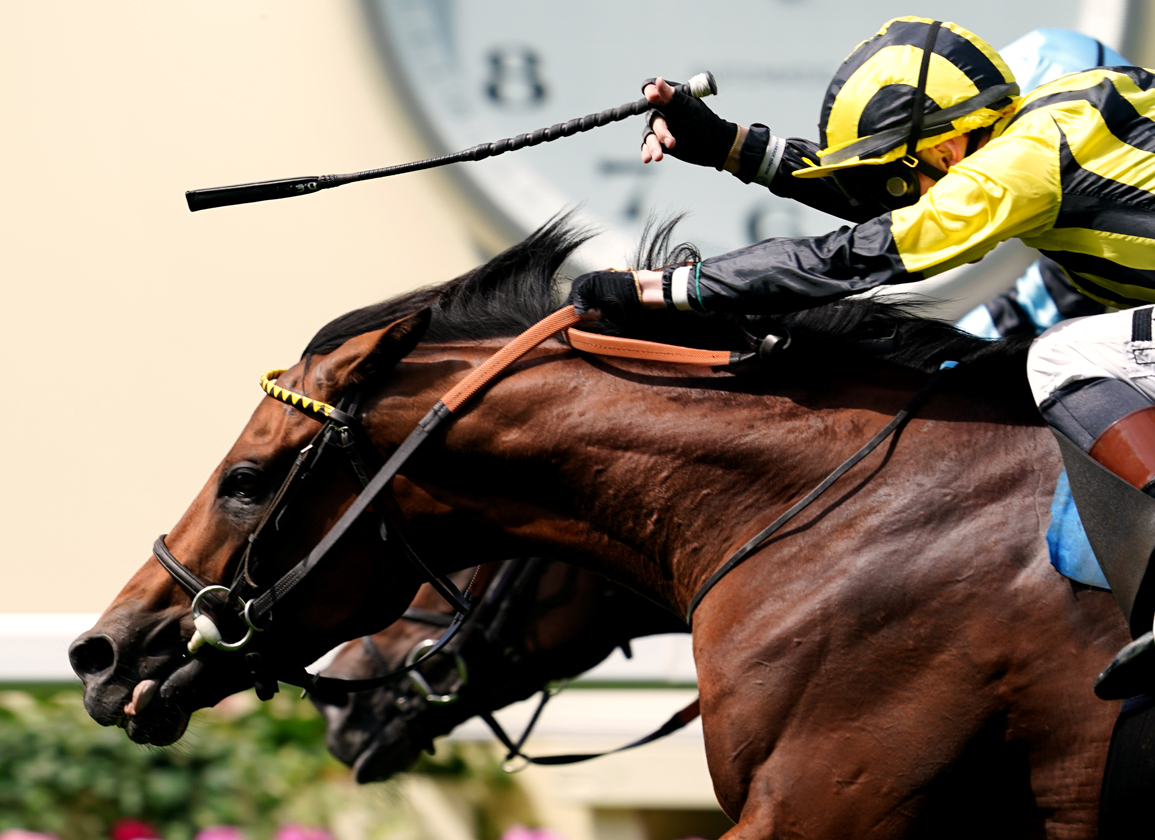 Wednesday's G2 Queen's Vase was staged over 14 furlongs, but it took a pixel study for the judge to call it as TDN Rising Star Eldar Eldarov (GB) inched out Zechariah (Ire) (Nathaniel {Ire}) to continue the fine week for Dubawi (Ire). KHK Racing's unbeaten colt had launched his season with a win over 10 furlongs on Newcastle's Tapeta May 24, but Roger Varian had plumped for this staying test of all the options here and ultimately was fully justified as the £480,000 Arqana Breeze Up graduate needed every yard to get in front. Anchored towards the rear of mid-division early by David Egan, the 5-2 favourite had plenty of ground to make up on Zechariah from the top of the straight as Colin Keane struck for home, but his stirring finale saw him take it from that rival on the line. While the official nose margin seemed too vast a measurement, there was a relatively gaping neck back to Hafit (Ire) (Dubawi {Ire}) in third as they drew clear of the remainder. “I have never hit the line so strong in a mile and six-furlong race and ended up by the St James's Palace Stakes start,” Egan said. “He was full of running. Stamina is his biggest attribute–we always thought he was a horse who would also like ease in the ground, so there is a lot more to come.”

Roger Varian, who had introduced the winner over an extended mile at Nottingham in October, had also been worried about the fast conditions and commented, “The ground was a concern because Eldar Eldarov is so inexperienced and I thought, on fast ground, he looks like a horse laden with lots of stamina so let's go the distance. There was a lot of chat about him in the winter because he'd won at Nottingham in a similar style to the Derby winner and of course we were excited about him and hoping to get him to a Derby trial, but the horse just didn't thrive in the spring. We went to Newcastle, where I think he was only 90% and that was a strong novice.”

“There is a lot to come from this horse and I think his best days are ahead of him. He put in one hell of a performance and you would think looking down the road that he could develop into a St Leger horse. Even looking to next year, hopefully he can keep improving. I'm delighted for KHK, Sheikh Khalid [ bin Hamad bin Isa Al Khalifa] and everyone involved. They are supporting the industry very strongly, they are supporting me. Days like this are very special to all of us and to get the horse home in front with a lot of expectations is very satisfying.”

Trainer Martyn Meade had to suffer the agony of losing out in the bobber and said of Zechariah, “A mile and six furlongs and you think crikey, I don't need to lose by that! That's racing for you! We have been waiting to run him over this sort of distance and have been building up to this. The betting did not show it, but we had a lot of faith coming into this and he looked as though he'd been well placed at one stage. Today was a bit of an experiment to see if our judgment had been right and he would get the trip. It opens up a whole new array of opportunities. He could have Cup hopes in time. Travelling to Australia could be an option with Aquis involved. They have horses with us to run them here, but he might be better there in time.”

Eldar Eldarov is the third of five foals and the second scorer out of Kirsten Rausing's Listed Prix de Liancourt, Listed Prix Zarkava and Listed Prix de la Pepiniere winner All At Sea (GB) (Sea the Stars {Ire}). Also responsible for the Listed Rothesay S.-placed A La Voile (GB) (Invincible Spirit {Ire}), she is one of five black-type performers produced by the G1 Deutschlandpreis, G1 Rheinland-Pokal and G1 Preis von Europa heroine Albanova (GB) (Alzao), who is a full-sister to the dual G1 Champion S. heroine Alborada (GB) and a half to the dam of Alpinista (GB) (Frankel {GB}) who brought up her own German group 1 treble last term in the Grosser Preis von Berlin, Grosser Preis von Bayern and Preis von Europa. All At Sea's 2-year-old colt Kingswood (GB) (Roaring Lion) was bought by Glyn Davies for €130,000 at the Goffs Orby Yearling Sale, while she also has a yearling filly by Study of Man (Ire).

An agonising wait for the winner of the G2 Queen's Vase to be called but Eldar Eldarov comes out on top for @varianstable, @DavidEgan99 and KHK Racing. pic.twitter.com/ASYoImCrlJ