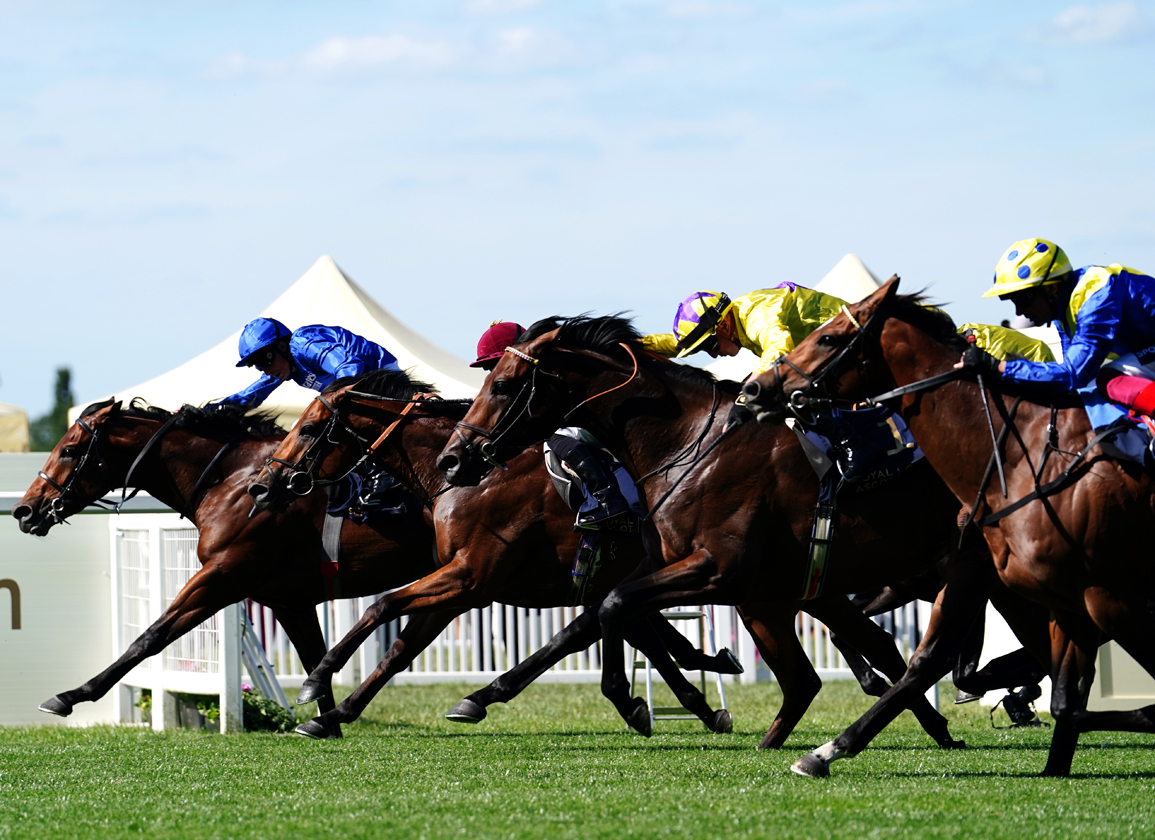 It was tight at the death, but Coroebus (Ire) (Dubawi {Ire}) had his head in front in a blanket finish to the G1 St James's Palace S. to add to his 2000 Guineas triumph and extend Godolphin's incredible run of success in the season's mile monuments. There were many moments when it looked as if the 10-11 favourite would fail to deliver as he first ran free in William Buick's hands off the moderate pace and was then trapped on the fence in early straight, but class acts find a way and he was able to do just that. With Pat Dobbs riding everybody to sleep on the front-running Lusail (Ire) (Mehmas {Ire}), Coroebus had no way forward other than up the rail and he was fortunate that the Hannon runner veered left to let him through approaching the furlong pole. Battling courageously, he held the rallying 28-1 shot by a head, with a short head back to My Prospero (Ire) (Iffraaj {GB}) in third and the race's hard-luck story Maljoom (Ire) (Caravaggio) flying late to be a further neck behind in fourth. “I felt it was class and determination which got us over the line there,” trainer Charlie Appleby said. “It was going to be a big learning curve for him today and I was delighted with how he took it in the preliminaries–he has never been more than 20 minutes up the road out of Newmarket.”

Coroebus's draw in two was both a help and a hindrance here, meaning that he was at the same time able to gain vital cover while being penned in on his first foray away from the wide-open spaces of his two home tracks. By halfway, the writing was on the wall that he would have to be as slick as he was in the Apr. 30 Classic to find his way out of the pocket that was made by the front two Aikhal (Ire) (Galileo {Ire}) and Lusail and by Wexford Native (Ire) (Teofilo {Ire}) and My Prospero on his outer. While he was able to slip by the weakening Aikhal passing the two-furlong marker, Maljoom was being stopped in behind and that was the crucial factor at play in this year's renewal. The Haggas runner produced his familiar late charge, but the line had come in time for the front trio and as they passed it Cieren Fallon's body language spoke volumes as the reality of Maljoom's ill fortune hit home.

Buick was relieved as well as delighted as he said, “I am very privileged to get on these good horses but, at the same time, it is a case of getting the job done. It was one of those races where it was tricky. I had a good draw, but a good draw can turn into a bad draw very quickly. Coroebus travels extremely strongly and you just want him to drop his head. Coroebus was brave, has a good turn of foot and a will to win. He has everything you could ask for in a racehorse.”

Appleby is pondering a meeting with Baaeed at Goodwood now. “William just said Coroebus was taking him on the whole way round,” he said. “Thankfully, the turn allowed him to have a breather. We'll have discussions, but I think the Sussex Stakes is an option along with the Prix Jacques le Marois. On the evidence of what I have seen today, Coroebus deserves to be in the Sussex–Baaeed was very impressive winner, taking nothing away from him, but this was just our horse's fifth start of his career and I thought it was a gutsy performance in a race that probably wasn't run particularly to suit us.”

Richard Hannon said of Lusail, who had drawn attention for how he had performed in the Guineas from a poor draw, “He's run a super race. He has confirmed the run from the Guineas, which we thought was an extremely good run–he didn't get it right in the gates and I think we proved it right here. A lot of people thought we should be going to the Jersey Stakes, but he's won group twos and he's run not necessarily the race of his life, but he's put his name in place in a group one and one's going to fall his way before the end of the year, I'm sure.”

William Haggas said of his pair, “My Prospero ran a great race. He just wants further and he just doesn't have the gears. Tom [Marquand] said he is just not quite there yet. He is going to be a very good horse. Poor Cieren is absolutely distraught. It is just the way it is. It is a horse race and he finished very well and he would have won in probably two strides, but he didn't. When you are slow away and he got in behind, then had two horses falling back on him, what do you do? It is a shame, we had an opportunity, but that is the way it is. We will keep him going and maybe there will better luck next year.”

what a finish!! Hard luck story for Maljoom but Coroebus is victorious in the St James's Palace Stakes. pic.twitter.com/M8WvP25y40