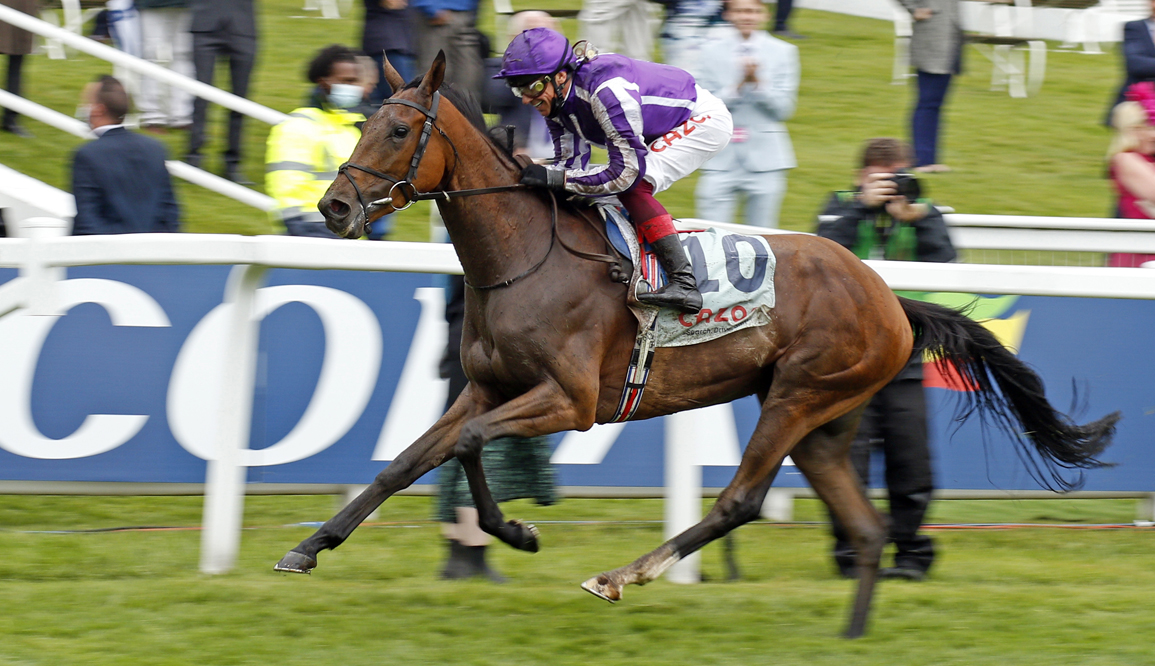 Snowfall (Jpn) (Deep Impact {Jpn}), the record 16-length winner of the G1 Cazoo Oaks last June, has been euthanised after suffering a pelvic injury in her box.

“It's very sad news, terrible,” said trainer Aidan O'Brien. “The lads were thinking of keeping her in training but they hadn't quite made up their minds. It was very possible.

“She had a pelvic injury in her box. Sometimes pelvic injuries go the right way or they can go the wrong way. Unfortunately this one went the wrong way. It's very sad and I feel very sorry for the lads, for Derrick [Smith], Michael [Tabor] and John [Magnier].”

Snowfall was bred by the Coolmore partners and is the first foal out of Best In The World (Ire) (Galileo {Ire}), a Group 3-winning daughter of the G1 Matron S. and G1 Lockinge S. victress Red Evie (Ire) (Intikhab), and therefore a full-sister to the G1 Prix de l'Arc de Triomphe and GI Breeders' Cup Turf scorer Found (Ire), the G3 Flame Of Tara S. winner and dual Oaks-placed Divinely (Ire) and the G3 Park S. winner Magical Dream (Ire). Best In The World was sent to Japan to start her stud career with consecutive matings to Deep Impact, the first resulting in Snowfall and the second the newly turned 3-year-old Newfoundland (Ire).

Snowfall broke her maiden in July of 2020 at The Curragh at third asking but failed to find the winner's enclosure in four subsequent starts as a juvenile. She first garnered headlines when a saddling enclosure error ahead of the G1 Fillies' Mile saw she and Mother Earth (Ire) (Zoffany {Ire}) saddled with each other's towels and ridden by each other's jockeys; it was initially thought that she ran third at 50-1, but the mistake was soon realised and she was correctly identified as finishing eighth. Both Mother Earth and Snowfall would go on to Classic victories and multiple Group 1s at three.

Partnered with Ryan Moore for the first time in the G3 Musidora S. on seasonal debut last May, Snowfall was a surprise 14-1 winner by an eye-catching 3 3/4 lengths over the highly regarded Noon Star (Ire) (Galileo {Ire}). Moore nonetheless took the ride on race favourite Santa Barbara (Ire) (Camelot {GB}) in the Oaks, but on the first Friday in June there was no question who was best. Partnered by Frankie Dettori fresh off his win aboard Mother Earth in the G1 1000 Guineas, Snowfall traveled inconspicuously in the second half of the pack at Epsom. She began to creep closer leaving Tattenham corner and, when pressed by Dettori, burst to the lead two out, sprinting clear to win by a record 16 lengths at odds of 11-2.

Dettori drew comparisons post-race to the great Enable (GB) (Nathaniel {Ire}), who he won the Oaks on in 2017, saying, “four out I had everything beat. I looked in front and they were all gone. I just cut through the middle-it was like a hot knife through butter. It was quite remarkable, because I pulled up by the stables and everybody else pulled up by the winning post. I've won many Classics, but none as easy as this one. Enable did the Irish Oaks, King George and Arc as a 3-year-old after this, and I wouldn't put that past her, she's that good.”

Six weeks later, Snowfall resurfaced at The Curragh for the G1 Irish Oaks reunited with Ryan Moore. Buried midpack on the fence, she nonetheless found a seam upon straightening for home and was once again an incredibly easy winner, striding an effortless eighth lengths clear of a trio of her chasing stablemates, with her relative Divinely, who had been third in the Oaks, picking up second.

Four weeks later, it was off to York for Snowfall to face elders for the first time in the G1 Yorkshire Oaks, and the result was much the same, with the bay traveling near the rear of the pack and, when asked, quickening to the lead and drawing away to win by four lengths, establishing herself as favourite for the G1 Prix de l'Arc de Triomphe.

It came as quite a surprise then, when Snowfall suffered her first reversal when second to Teona (Ire) (Sea The Stars {Ire}) in the G1 Prix Vermeille in September. Forced to face a bottomless Arc three weeks later, Snowfall was not disgraced but off the board for the first time when beaten 4 3/4 lengths in sixth, and made what was to be her final start when third in the G1 British Champions Fillies & Mares S. at Ascot on Oct. 16. Snowfall won five races from 14 starts for earnings of £885,696. Her dam, Best In The World, has an as-yet unnamed 2-year-old colt by Dubawi (Ire).