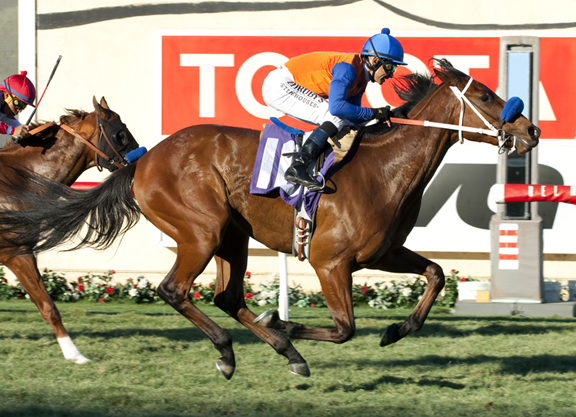 Dressed in Hermes was ready for his close up in Sunday’s GIII Cecil B. DeMille S. at Del Mar with his fashionable win. Sydney Belzberg’s Budget Stable homebred began his career on dirt where he finished fourth here July 25. He was third when trying the turf Aug. 12 behind subsequent Del Mar Juvenile Turf winner Hollywood Don (Tapit) and graduated when favored in the Zuma Beach S. at Santa Anita Oct. 10. Dressed in Hermes tracked the pace in second during the early stages of the GI Breeders’ Cup Juvenile Turf, but faded late to finish fifth over the yielding Keeneland course Oct. 30. Favored here, Dressed in Hermes stalked the pace from midpack parked three wide during the opening stages. The bay crept into contention on the final bend, continued his sustained rally in the stretch to catch Collected in the final furlong and win going away.

Jockey Mike Smith, who was aboard Dressed In Hermes for the first time Sunday, said, “[trainer] Janet [Armstrong] just said ride him with confidence. She said he might do best to lay fourth or fifth and then he should come running. She was right. I just had to guide him around there. He wants to run on, this horse. I had a hard time pulling him up after the race. Had a hard time pulling him up going into the winner’s circle. He’ll run on; mile and an eighth for sure. He’s got a lot of good energy.”

“He’s filled out since he traveled [to Breeders’ Cup and back],” noted winning trainer Janet Armstrong. “He’s filled out more, has more weight and more muscle, which is really a good thing. During the stretch run, I really thought he was going to make it. He’s such a nice horse. We’ll give him a little time off now and probably come back at the end of January. We’ll probably try the dirt next. Just don’t know where or which one.”

Dressed In Hermes is the fourth foal out of unraced dam Elusive Fashion, and is a half-sibling to stakes winner I Rock The Party (Rock Hard Ten). Second dam Indian Fashion (General Holme) is a stakes winner and multiple graded stakes placed and produced Solaia (Miswaki), who is graded stakes placed in England. Elusive Fashion has a yearling colt by Sidney’s Candy and a weanling filly by Artie Schiller. She was bred to Tizway.