Home » Archive » Shared News » Down the Shedrow with Mike Stidham

Down the Shedrow with Mike Stidham 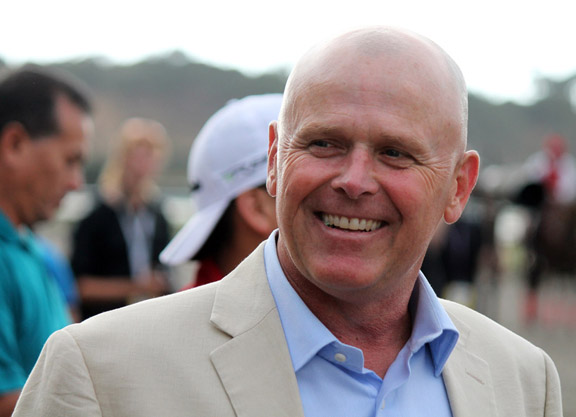 For trainer Mike Stidham, racing has always been in his blood. His father George Stidham was a jockey, turned jockey agent, turned trainer and in 1978, at the age of 21, the younger Stidham took out his trainer's license and went out on his own with a few of his father's cast-offs. He had his first winner a year later and captured his first graded stake in 1988 with Manzotti, who would go on to sire his first Grade I winner Two Altazano.

Now 59-years-old, the New Jersey native has conditioned 32 graded stakes winners, including a trio of Grade I-winning females in Two Altazano, Sutra (Meadowlake) and most recently Her Emmynency (Successful Appeal). Stidham looks primed to increase that number in 2017 with Grade III winner and GISP Zipessa (City Zip) coming back and several promising young runners in the barn, such as “TDN Rising Stars” Diadura (Hard Spun) and Stallion Heiress (Exchange Rate).

Winner of the GIII Dr. James Penny Memorial S. this summer, Zipessa checked in third in the GI Beverly D. S. on Arlington Million day and was second next out in the GI Rodeo Drive S. at Santa Anita Oct. 1. The Empyrean Stables colorbearer was last seen finishing a late-closing fifth in the GI Breeders' Cup F/M Turf Nov. 5.

“Zipessa arrived with Diadura [Tuesday], so she is going to get started back for her 2017 campaign. We are really excited about her because in the Breeders' Cup race she showed us a dimension we didn't know she had. She got off bad, Bravo just kind of let her settle without rushing her and then asked her to make a move. She mad a big, sweeping move and lost a lot of ground, but she was running on at the end, so we are really, really excited about getting her back and getting going with her.”

Empyrean Stables and Two Princesses' Diadura captured her debut over the Arlington synthetic in August and was tabbed a “TDN Rising Star” after her decisive victory in the Arlington-Washington Lassie S. Sept. 10 (video). The dark bay was last seen finishing a disappointing 10th in the GI Darley Alcibiades S. in her first start on dirt at Keeneland Oct. 7.

“She's been down in Ocala with Randy Bradshaw. She's worked a couple of quarters and actually just arrived back in my shedrow at Fair Grounds [Tuesday].”

“We don't have anything definite planned. We just wanted to give her some time after her race at Keeneland to grow up and fill out a little bit, which she did. We don't have a schedule planned out. We will just take it one race at a time.”

“She was coming out of a 5 1/2-furlong sprint race and going two turns for the first time [in the Broussard]. We felt like she would handle the added distance with no problem, but [you don't know] until they go out and do it. Because she is so talented, but very fast early, you always worry about those kind being able to relax and finish up. She really impressed all of us with the way she was able to open up 10 lengths down the backside and just keep going in the stretch. We were very pleased with her and very impressed. With her, we are certainly going to look at the little stake here at the Fair Grounds also [the Allen 'Black Cat' Lacombe Memorial S. Mar. 11] and also looking forward to maybe the [GIII] Appalachian [S.] at Keeneland [Apr. 13]. Something like that.”

Breaking sharply from post 11 in her career bow on the Fair Grounds lawn Feb. 11, Sangreal Investments homebred Haniel went from gate to wire to graduate by 3 1/2 lengths (video).

“We were really pleased with her. She was one that was working nicely on the dirt and we knew with her pedigree that the grass should help her even more. She certainly went out and did what we were hoping she would do. She was impressive in the way she was able to let the horses come to her in the stretch and then pull away with another gear. We were happy to see her able to do that.”

“There is a $50,000 stake in March at the Fair Grounds [the Allen 'Black Cat' Lacombe Memorial S. Mar. 11] that we will nominate her to and we will also be looking at the first allowance condition.”

Third on debut to next out stakes winner Saint's Fan (Tale of Ekati) at Churchill Downs Nov. 4, Proforma broke through with a neck success next out there Nov. 27. The DARRS Inc. runner concluded his juvenile campaign with a three-length victory in the Sugar Bowl S. in NOLA last time Dec. 17.

“He's doing well. He got caught up in the quarantine, so we missed a couple of the options we had for him, a stake at the Fair Grounds and a stake in Houston that we were considering. The quarantine stopped us from doing either one of those, so we don't have anything definite planned, but we will be looking at coming back in a stake in his next start.”

Third to Diadura in the Arlington-Washington Lassie, R Naja earned her diploma at fourth asking on the main track at Fair Grounds Nov. 25, but tired to sixth next out in the Letellier Memorial S. Dec. 17. The DARRS Inc. colorbearer kicked off her sophomore season with a victory sprinting over the lawn in NOLA Feb. 10 (video).

“R Naja is another filly that we think is probably pretty talented. We think turf is going to be her preferred surface. She's another one where we aren't positive what her best distance is going to be, but definitely staying on turf.”

Privately purchased by DARRS Inc. after RNAing for $19,000 at the 2016 Keeneland January sale and transferred to Stidham, Rapid Rhythm won four of her seven starts for those connections, including the Virginia-bred Oakley S. at Laurel Sept. 24. The bay was privately purchased yet again by Robert S. Evans and captured the Battle of New Orleans S. Dec. 3 in her first outing for her new owner.

“We are pointing for the Mardi Gras S. [Feb. 28]. She is one of those ones that always had talent and we just got here in these one turn turf races and she has just blossomed for us. We are lucky to have her. I think Mr. Evans' plan when he bought her was to breed her [to Tonalist] after this race, so this will probably be her last race.”

A two-time winner as a juvenile for previous trainer Donnie Von Hemel, Synchrony was third in Oaklawn's Smarty Jones S. at the start of last year and was a disappointing sixth next out in the GIII Southwest S. this time last year. Last seen completing the trifecta in Keeneland's GIII Lexington S. Apr. 16, the Pin Oak homebred was transferred to Stidham and is set to make his first start for his new conditioner Friday in the eighth race at Fair Grounds.

“Synchrony is a horse of Pin Oak's that I had never trained before. They felt he wasn't suited for Oaklawn, which is where Donnie Von Hemel goes. They didn't think he liked that track, so they sent him to me a few months ago and he's really been training well. This will be our first start with him and we are excited to have him in the barn.”

A daughter of MGSW Forest Heiress (Forest Wildcat), who is a full-sister to GISW Wildcat Heir, Godolphin's Arbol finished eighth when unveiled over the Fair Grounds main track Jan. 29. The homebred will switch to the turf Friday for her second start in the third race in NOLA.

“Arbol is a filly of Godolphin's that ran first time out on the dirt. We felt ultimately with her pedigree and her make up that sprinting on the grass was going to suit her better. We feel she is going to improve off her first start.”

“She has trained well over at the Evangeline training center. She is bred for the grass as well and we think she has a lot of potential.”

Godolphin's Brookline is the final foal out of the late GISW and Broodmare of the Year Cara Rafaela (Quiet American), who produced champion Bernardini (A.P. Indy) and GISP Ile de France (Storm Cat), the dam of MGISW Love and Pride (A.P. Indy). Fifth on debut in NOLA Dec. 3, the homebred made up ground late to be third next out Dec. 26. The gray kicks off his 3-year-old campaign Saturday in the seventh race at the Fair Grounds.

“Brookline has been a bit of a project. He is obviously bred to be anything, a superstar. We always felt like he has a lot of talent, but not necessarily giving everything that he's got. He's had a couple starts with blinkers on and we experimented with taking the blinkers off because in his last start, he actually kind of almost walked out of the gate. He left slowly and didn't really get into the race until really late. He dropped way back and started making a move late and made up quite a bit of ground. He's one of the ones that is a little bit immature mentally and hasn't really put it all together, so we are trying him this time without the blinkers. He's worked well without them, so we are hoping this time that with the change in equipment and having a couple of races under his belt, he is going to come around for us. He is a good looking horse with a big stride and we are trying to get him to show what he really can do. Hopefully he will do that in this race.”

Godolphin's Charged is out MGSP Kiawah Cat (Lemon Drop Kid), a half-sister to GSW millionaire Cat O'Mountain (Street Cry {Ire}), who was third in the G1 Dubai World Cup; and GSW and MGISP Michita (Dynaformer). Runner-up in her career bow sprinting over the Arlington turf Aug. 4, the dark bay was a non-factor seventh last time at Kentucky Downs Sept. 15. The homebred switched to the dirt and extends to a route of ground Saturday in ninth race at Fair Grounds.

“Charged is a filly that made her first two starts on the grass, but her last three or four works here on the dirt during the quarantine have been really impressive. We are looking forward to trying her two turns on the dirt. I'm hoping for a big effort”