Home » Archive » Shared News » Down the Shedrow with Dale Romans

Down the Shedrow with Dale Romans 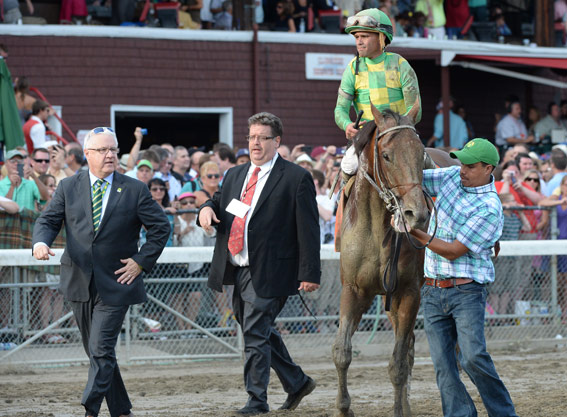 Dale Romans (second from left) with Keen Ice | A. Mooshian

The Dale Romans stable really picked up steam in the second half of the 2015 racing season, starting with Keen Ice (Curlin)'s defeat of Triple Crown hero American Pharoah (Pioneerof the Nile) in the prestigious GI Travers S. Aug. 29. Romans provided the TDN with updates on his stable stars, who are just getting settled in Florida and will soon begin their preparations for next season.

“We are just now getting to Florida, so we will give them all a few days to get their feet under them and get back to training,” Romans remarked. “We will probably breeze everybody right before Christmas and then start pointing towards races.”

Donegal colorbearer Keen Ice followed his career high in the Travers with solid fourth-place efforts in both the GI Breeders' Cup Classic Oct. 31 and the GI Clark H. Nov. 27.

“He is doing well, getting cranked up for next year. He has never really left training. We just haven't been breezing him. [Early targets for next year] will be up to Jerry Crawford.”

“I have mixed emotions [on his performance in the Clark]. I would have loved to see him win, but I think he ran a nice race, and in a couple more jumps, he would have gotten there. He came home fast. Next year, he is going to belong with the best handicap horses of the year. I think we just scratched the surface with him. No stud deals have been made. We have had a lot of talks, but we strongly believe he will be worth more money at the end of 2016 than he was at the end of 2015.”

The Albaugh Family Stable's Brody's Cause became the conditioner's next Grade I winner just five weeks Keen Ice's Travers triumph when mowing down a talented field of juveniles in the GI Claiborne Breeders' Futurity Oct. 3. The bay finished a better than it looked third last time out in the GI Breeders' Cup Juvenile Oct. 31.

“He, of course, will get on the Triple Crown trail. He will start breezing right before Christmas. I'll be talking to Jason Loutsch, who manages the Albaugh Family Stable, and we will figure out what path we decide to take. With him, we will mark down weekends, not races. There are so many things going on for 3 year olds all on the same days, that we will just pick out weekends and then decide which race we want to go to. Training in South Florida, you can head about anywhere and feel good about your position.”

“I think he ran well [in the BC Juvenile]. We weren't going to change his running style. He is one of the few horses that made up as much ground as he did. He did everything you want to see in a horse you want to go a mile and quarter with in May.”

The Albaugh Family's Unbridled Outlaw (Unbridled's Song) proved to be one to watch with a troubled late-running third in the GIII Iroquois S. Sept. 12, but finished a disappointing 12th in the Juvenile.

“We did give Unbridled Outlaw a little time off after the Breeders' Cup. He had a small injury, nothing major. It just looks like he maybe kicked himself or something in the race. He is ready to go back to galloping. He is a real different type. He is a very athletic, fit type horse. It doesn't take a lot for him. I think he will bounce right back. It will be the same thing with him [as Brody's Cause], you have to mark a weekend, not a race.”

“I thought things would have gone a lot better for [Unbridled Outlaw] in the Breeders' Cup. We did not have an explanation right after the race, but then we saw the little bit of an injury that he had. It doesn't amount to much, but it was enough probably to compromise his race that day. I think you are going to see some really good stuff out of him.”

“He is by Paddy O'Prado, who was one of our better stars we've had, and who I think is going to be an outstanding sire on turf or dirt. I was extremely impressed with his performance at Churchill in that off-the-turf race. I think we will put him on kind of the same trail. We will try the Derby trail until they push us off. I think I will probably start him in an allowance race [next].”

“She is doing very well. I had to give her some time off this summer and I kind of got behind the eight ball on time with her. I think those two races did her a lot of good and I think she is primed for a big year.”

“I just got off the phone with Jeff Lifson of West Point [Thoroughbreds]. There is a series of races in Texas we were looking at and a couple of other spots. We are going to get together in Florida. Terry [Finley] and I and we are going to talk about what is the next best spot for her.”

“I thought that was a big performance [in the Zia Park Oaks]. We expected to win or we wouldn't have gone that far. This is the type of filly that I don't think we've seen the best of. She is a little bit light. She has had some trouble keeping weight on and different things. I think she has finally fully matured. She has showed a lot of talent in training and in a couple of races she has shown a lot of talent, but I think she put it all together this fall. We got a stakes win out of her and made some money, but I think the best is in front of her.”

Michael Bruder's Susie's Yankee Girl opened her account with a pair of impressive victories sprinting at Churchill Downs Sept. 25 and Nov. 1, respectively. The juvenile, who hails from the family of two-time Horse of the Year Wise Dan (Wiseman's Ferry) suffered her first defeat last time out when stretched to 1 1/16 miles in that venue's GII Golden Rod S. Nov. 28.

“She was [impressive in her first two starts]. She might not want to go that far [as she had to in the 1 1/16-mile Golden Rod]. We might try to shorten her up a little bit. I think right now she is a one-run closer, a one-run sprinter. We will get her into some of those types of races and see how she does.”

MA CAN DO IT (MAJESTICPERFECTION)

Kyle Nagel's Ma Can Do It is still a maiden, but is already Grade I-placed with a third in the GI Darley Alcibiades S. Oct. 3 and was fifth last time out in the GI Breeders' Cup Juvenile Fillies Oct. 31.

“We might try a maiden race with her at Gulfstream and then see where we will go with her. She is Grade I placed before she even breaks her maiden and that is a good thing with a young filly. We got the hard part out of the way. We tried to do the tough stuff first with her. Now we will try and win a maiden race, which is not always the easiest thing to do at Gulfstream, and see where she takes us.”