Home » Archive » Shared News » Down the Shedrow with Bob Baffert

Down the Shedrow with Bob Baffert 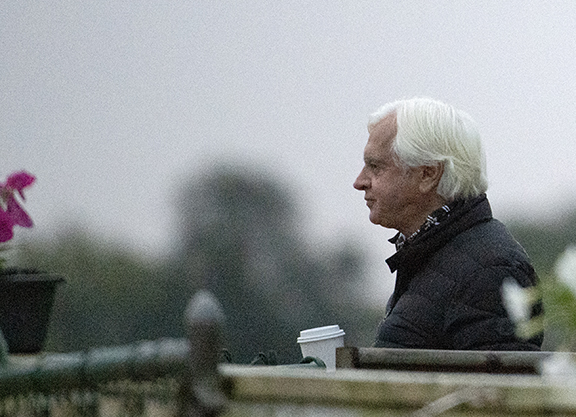 Year after year, two-time Triple Crown-winning conditioner Bob Baffert has some of the country's top runners in his shedrow and 2021 is no exception. The Hall of Famer has a plethora of possible GI Kentucky Derby runners; a few possible GI Kentucky Oaks contenders; the reigning champion female sprinter; and several exciting unraced prospects. You never know when Baffert will unleash the next superstar or which of his horses will be on top by the first weekend in May, but you can count on him having a live contender in most of the big dances.

Baffert filled the TDN's Christie DeBernardis in on his plans for his leading sophomores and a few of his other top runners.

Though champion Authentic is now retired, Baffert has another son of Into Mischief who may be poised to fill his shoes in the undefeated Life is Good. Tabbed a 'TDN Rising Star' following his dazzling debut win at Del Mar Nov. 22, the $525,000 KEESEP buy followed suit with a victory in Santa Anita's GIII Sham S. Jan. 2.

“He is still doing well. He runs in the San Felipe, so we are getting ready for that.”

Baffert has another unbeaten 'TDN Rising Star' on the Derby trail in Concert Tour. An impressive first-out winner at Santa Anita Jan. 15, the Gary and Mary West homebred captured the GII San Vicente S. next out Feb. 6.

Freedom Fighter carries the banner for the group known as the Avengers. The dark bay won his career bow at Del Mar Aug. 1 and came up a half-length short of Concert Tour when second in the San Vicente.

Opening his account at Los Alamitos Dec. 11, Medina Spirit completed the exacta behind Life is Good in the Sham. The Florida-bred broke through at the graded level next out with a gritty score in Santa Anita's GIII Robert B. Lewis S. Jan. 30.

“He is nominated everywhere. I will know in about another week. I sort of have an idea, but I am waiting.”

Also campaigned by the Avengers crew, Spielberg placed in both the GI Runhappy Del Mar Futurity S. and the GI American Pharoah S. prior to breaking his maiden at Del Mar Nov. 1. Fourth in the GIII Bob Hope S. Nov. 15, the $1-million KEESEP purchase captured the GII Los Alamitos Futurity S. Dec. 19 and was a disappointing fourth in the Bob Lewis last out.

“I had a set back with him. He is off the Derby trail.”

Summer Wind homebred Triple Tap has yet to make the races, but his pedigree makes him a very exciting prospect. The chestnut is a half-brother to Triple Crown hero American Pharoah and a full to Jane Lyon's Grade I winner Chasing Yesterday.

“He actually had his first gate work [Thursday] and he went really well [five furlongs in :59.60 (1/32)] (Click here for XBTV video). He's about a month away still. He is getting there slowly. I don't want to jinx him or anything, but he is a nice horse.”

Earning her diploma at third asking in the Anoakia S. Oct. 18, Kalypso checked in second in the GI Starlet S. at Los Alamitos Dec. 5 and came back to win the GII Santa Ynez S. Jan. 3. The chestnut completed the exacta last time in Santa Anita's GIII Las Virgenes S. Feb. 6.

“She is doing well. She is probably more of a one-turn horse, but we will run her back in the next race here [the GIII Santa Ysabel S. Mar. 7] or the [GII] Santa Anita Oaks [Apr. 3]. I'm not sure yet.”

A debut winner at Del Mar Aug. 30, Varda was second to retired stablemate Princess Noor (Not This Time) in Santa Anita's GII Chandelier S. Sept. 26. The bay defeated both that rival and Kalypso when taking the GI Starlet S. at odds of 17-1.

“She has a little set back and is off the Oaks trail.”

Yet another first-out winner from this barn to earn the 'TDN Rising Star' tag Mar. 7, Gamine was disqualified from a two-turn victory at Oaklawn May 2. Dominating both the GI Longines Acorn S. June 20 and the GI Longines Test S. Aug. 8, the $1.8-million EASMAY buy crossed the line third in the Kentucky Oaks, but was disqualified and placed ninth for a positive test Sept. 4. The bay captured the GI Breeders' Cup F/M Sprint S. Nov. 7, clinching the female sprint championship in the process.

“Gamine is doing well. She had her second little breeze. We are pointing for Derby week maybe, the GI Derby City Distaff.”

Happier wired the field to earn her diploma and 'TDN Rising Star' honors in her Del Mar unveiling July 31. Sent to the sidelines following that effort, the $800,000 KEESEP purchase returned to action in Arcadia Feb. 14, winning an optional claimer.

“She is a very nice filly. I think she wants to go longer, so we will look to stretch her out.”