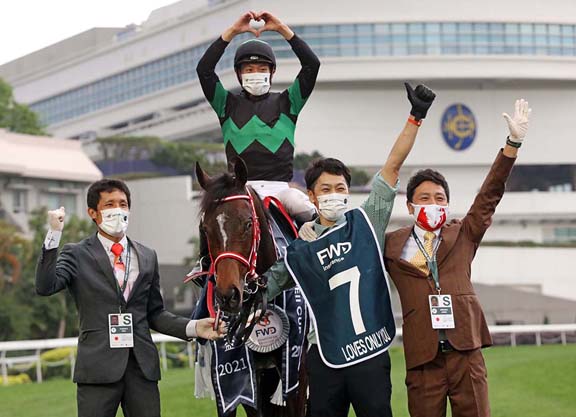 On this day 12 months ago, jockey Vincent Ho guided Southern Legend (Aus) (Not A Single Doubt {Aus}) to an upset victory in the FWD Champions Mile, his first Group 1 score some 10 years removed from being named the champion apprentice rider in Hong Kong and about a month after throwing Golden Sixty (Aus) (Medaglia d'Oro) across the line first in the prestigious BMW Hong Kong Derby.

Sunday's FWD Champions Day program at Sha Tin, attended by the biggest on-track crowd since COVID-19 took hold last year, marked a new high for the homegrown hoop, as not only did he pilot Golden Sixty to a 14th consecutive victory in the G1 FWD Champions Mile (see below), he capped the afternoon with a savvy steer atop Japanese mare Loves Only You (Jpn) (Deep Impact {Jpn}), who led home a 1-2-3-4 finish for the island nation in the day's richest test, the HK$25-million G1 FWD QE II Cup.

“I can't describe it,” Ho told the HKJC notes team, reflecting on his two successes that came about 40 minutes apart. “The QEII Cup is one of my dream goals as well as the Derby and the December internationals, a QEII win means a lot. It's amazing today with Golden Sixty and Loves Only You. It's definitely one of the highlights, I'll enjoy it for sure.”

QE II Cup: How Sweep It Is…

Loves Only You was down in trip for the QE II Cup, having run a cracking third behind Mishriff (Ire) (Make Believe {Ire}) in the G1 Dubai Sheema Classic over a 12-furlong trip just 29 days back. The 2019 G1 Yushun Himba (Japanese Oaks) victress jumped without incident from gate five and landed in the one-out and one-back position, as Time Warp (GB) (Archipenko) was gifted a cheap time of it up front when potential pace factors Kiseki (Jpn) (Rulership {Jpn}) and Glory Vase (Jpn) (Deep Impact {Jpn}) were slowly away.

The early tempo was very much in favour of need-the-lead Time Warp, who went the opening 800 metres in :51.92 and was past the half-mile marker in a dawdling 1:15.45. Defending champion Exultant (Ire) (Teofilo {Ire}) was the first to try to pour some pressure on the front-runner, but Ho got going on Loves Only You leaving the three-furlong point, momentarily locking away favoured Japanese Triple Crown winner Daring Tact (Jpn) (Epiphaneia {Jpn}) down inside. Exultant couldn't quite get to Time Warp and was one of the first beaten, but Loves Only You was busily ridden into the final furlong and came away to score, as Glory Vase closed off nicely for second. Daring Tact found clear racing room in upper stretch, but was not good enough on the day and finished third, while Kiseki made belated progress into fourth.

Loves Only You is the first Hong Kong winner for colourful trainer Yoshito Yahagi, who won the 2016 G1 Dubai Turf with Loves Only You's full-brother Real Steel (Jpn) and the 2019 G1 Ladbrokes Cox Plate in Australia with Lys Gracieux (Jpn) (Heart's Cry {Jpn}). The latter was beaten a neck by Exultant in the 2018 G1 Longines Hong Kong Vase and was third to compatriot Win Bright (Jpn) (Stay Gold {Jpn}) in this race during her Horse of the Year campaign in 2019.

Loves Only You's dam was offered in foal to Danehill Dancer (Ire) as an unraced 3-year-old at the 2009 Keeneland November Sale, but nevertheless fetched $900,000, and with good reason.

Loves Only Me is a daughter of Monevassia, a full-sister to Kingmambo and to Miesque's Son, whose multiple champion and MG1SW Rumplestiltskin (Ire) (Danehill) is the dam of G1 Darley Yorkshire Oaks winner Tapestry (Ire) (Galileo {Ire}) and her GSW full-brother John F Kennedy (Ire).

Third dam Miesque requires no introduction. Nine times a champion in England, France and the U.S., the homebred was victorious no fewer than 10 times in Group 1 and Grade I company, including the English and French 1000 Guineas in 1987, and the G1 Prix Jacques Le Marois and GI Breeders' Cup Mile in 1987 and 1988, for which she received consecutive Eclipse Awards. Monevassia's half-sister Second Happiness (Storm Cat) is the dam of Study of Man (Ire) (Deep Impact {Jpn}), who carried the Flaxman silks to victory in the 2018 G1 Prix du Jockey Club.

The cross of Deep Impact over Storm Cat mares has produced 50 winners from 65 runners (71 foals), of which 11 have succeeded in stakes company (16% SWs to runners), including G1SW's A Shin Hikari (Jpn), Kizuna (Jpn), Satono Aladdin (Jpn), Lachesis (Jpn) and Ayusan (Jpn). Beauty Parlour (Jpn), herself a Pouliches winner, is out of a mare by Storm Cat's son Giant's Causeway.

Since producing her in utero foal, Loves Only Me had a standing date with Deep Impact, accounting for three million-dollar winners. She missed to the late sire in 2018, but is represented by a 2-year-old full-brother to Loves Only You and Real Steel from Deep Impact's final crop. Her yearling is a colt by Duramente (Jpn) and she was most recently covered by Heart's Cry (Jpn).

WATCH: Loves Only You leads a Japanese sweep of the QE II Cup

After toying with the idea of a start in the QE II Cup, the connections of Golden Sixty sensibly settled on the G1 FWD Champions Mile, where he started a $1.20 (1-5) mortal. In the end, he scraped in just ahead of stablemate More Than This (GB) (Dutch Art {GB}) to take his career record to 17 wins from 18 runs, the last 14 in succession.

Golden Sixty and More Than this settled as the trailing duo in a race that drew just six entries, as Hong Kong Classic Cup (1800m) upsetter Healthy Happy (Aus) (Zoustar {Aus}) showed the way from Ka Ying Star (GB) (Cityscape {GB}) through moderate early sectionals. Golden Sixty raced keenly down the back as is his wont–mouth agape–and was clearly last to make the bend after 800 metres in :47.69. Vincent Ho decided he could no longer hold the heavy favourite at the 600 metres, allowing Golden Sixty to sweep around rivals to make a line of four turning for home. The way he asserted a furlong and a half out had whipped those aforementioned fans into a frenzy, but Golden Sixty–who can idle once in front–began to lay in, even under a right-handed whip from Ho. More Than This, meanwhile, was hitting his best stride and was cutting back the margin, only to have the winning post come a fraction too soon. The runner-up's owner also campaigns Playa del Puente (Ire) (Elzaam {Aus}), who nearly beat Golden Sixty at 289-1 in the Derby.

“They were a bit slow, and when I pulled out at the 600-metre mark, he was already alongside them, then when I hit the straight he just went for it,” Ho told the HKJC notes team. “He has never been chased and we learnt today that he still can fight when something chases him, not just when he is doing the chasing, which is good.”

Winning trainer Francis Lui added: “He's a very good horse–I was a little bit worried, but Golden Sixty is that kind of horse, when he passes the other horses he thinks his job is done but then when he saw another runner coming he turned it on again.”

Now seven-from-seven this term, Golden Sixty is a candidate for a break, but an historic sweep of the Triple Crown and a bonus loom if he were to add the G1 Standard Chartered Champions and Chater Cup (2400m) to previous victories in the G1 Stewards' Cup (1600m) and G1 Citi Hong Kong Gold Cup (2000m) in a month's time. It would mark his first start past 10 furlongs.

“Depends, I will see how the horse recovers and then decide, because the Triple Crown is still under consideration,” Lui said. “I don't think the distance is a worry, he's that kind of horse who will fight no matter what, it just depends on how he recovers.”

WATCH: Golden Sixty makes it 14 straight in the Champions Mile

All Too Easy For Wellington in the Chairman's…

For some time, Hong Kong has been looking for its next superstar sprinter, and with Hot King Prawn (Aus) (Denman {Aus}) on the shelf and with time having been called on the local stint of The Everest winner Classique Legend (Aus) (Not A Single Doubt {Aus}), those entered for Sunday's G1 Chairman's Sprint Prize had a chance to stake their claims. Despite a hot $2.20 (6-5) favourite in the form of G1 Longines Hong Kong Sprint hero Danon Smash (Jpn) (Lord Kanaloa {Jpn}), Wellington (Aus), a son of Black Caviar (Aus)'s half-brother All Too Hard (Aus), rose to the challenge to lead home a 4-year-old sweep. Danon Smash, subsequent winner of the G1 Takamatsunomiya Kinen, never looked likely, finishing four lengths' sixth.

Settled midfield and one off the fence as Computer Patch (Aus) (Exceed and Excel {Aus}) set a sedate tempo for the opening 400 metres, Wellington traveled sweetly outside of the rail-skimming Sky Field (Aus) (Deep Field {Aus}) and about a length ahead of a niggled-at Danon Smash as the real running was about to begin. Eased to the outside of Voyage Warrior (Aus) (Declaration of War) at the quarter-mile marker, Wellington launched his rally down the centre of the course, grabbed a game Computer Patch with 50 metres to race and pulled clear. Sky Field was another nose back in third.

“He had a perfect trip,” said winning jockey Alexis Badel. “The horse was much more relaxed than last time. Honestly, the draw last time was a bit difficult and the ground was faster as well, so it was difficult for me to relax the horse without giving ground.

“Today, I had the perfect race, just close to the pace and more relaxed and when I put a little bit of pressure on my horse, he responded very well. To me, he's a top-class horse and he just proved it today,” Badel added.

Winner of three-from-four during his first preparation last season, Wellington romped over 1000 metres with 133 pounds on his back in Class 3 in December and defeated Computer Patch in Class 1 Mar. 13. He was most recently fifth to 178-1 Amazing Star (NZ) (Darci Brahma {NZ}) from a high draw in the G2 Sprint Cup Apr. 5.

Wellington is the 20th black-type winner, 14th at group level, and the fourth top-level winner for Vinery Australia's All Too Hard. For More Than Ready, who shuttles from WinStar Farm in the U.S. to Vinery for Southern Hemisphere stud duties, his daughters have now produced 108 stakes winners, 50 at the graded or group level and now 13 Grade I/Group 1 winners worldwide.

Wellington's dam, Group 3-placed in Australia, is a daughter of Danoise, who was acquired by breeder Kia Ora Stud for 240,000gns at the 2006 Tattersalls December Mares sale. His third dam, the German stakes-placed Solo de Lune was responsible for Irish highweight L'Ancresse (Ire) (Darshaan {GB}), second in the 2003 G1 Darley Irish Oaks and a neck second to Islington (Ire) (Sadler's Wells) in that year's GI Breeders' Cup Filly & Mare Turf at Santa Anita. L'Ancresse's son Master of Reality (Ire) (Frankel {GB}) was a winner at Group 3 level in Ireland and a longshot third to Stradivarius (Ire) (Sea The Stars {Ire}) in the 2019 G1 Ascot Gold Cup.

The 10-year-old Mihiri is the dam of a yearling filly by Star Witness (Aus) that fetched A$85,000 from Tricolours Racing and Syndications at the Inglis Classic Sale this past February and was bred back to All Too Hard last September.