Don't Jump the Gun, His Runners Are Coming On Fast 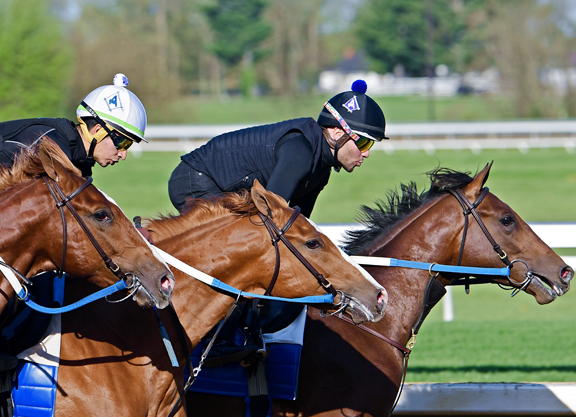 The team at Three Chimneys could hardly have asked for a better start at stud for champion Gun Runner. The most expensive horse to retire to stud for the 2018 season, he filled a 171-mare book his first year, was the leading first-crop weanling sire the following year with an average exceeding $275,000, and again topped his class with his yearlings in 2020.

By most accounts, the son of Candy Ride (Arg) has not done a thing wrong in his early stud career and yet, as his first crop was building a foundation in training early on this year, they were pigeonholed into the theory that they might take some time to develop into top form.

After all, Gun Runner was competitive at the highest level in his early career, but it wasn't until late November of his sophomore campaign that he scored his first of six Grade I victories in the Clark H. and from there, was nearly unbeatable against top company as he earned his Horse of the Year title at four, capped off with a GI Pegasus World Cup win at five.

The stereotype doesn't go without strong reasoning then, so the Gun Runners will just have to prove the doubters wrong.

Perhaps no one can provide more insight on how Gun Runner's first crop is progressing than the one who trained the dual champion.

Steve Asmussen currently has seven Gun Runner 2-year-olds in training at Keeneland, many of which he is pointing to debut once the Churchill Downs Spring Meet is underway. He said that each of these juveniles received glowing praise from his father Keith when they were first put under saddle at the family's training center in Laredo, Texas.

“We're very interested in wanting Gun Runner to succeed because of all he's done for us from an emotional aspect, but from all the conversations I've had from my father, he consistently talks about how good their attitude is about taking what you're doing with them. They're very businesslike, they keep their appetite and continue to get stronger. Straightforward is how he describes them.”

Asmussen stressed that the most common thread found in all of the Gun Runners is their mentality.

“They have very good minds about them,” he said. “They're extremely sound and mentally mature. They're showing some talent, so we're more than a little excited about them.”

On Monday, three of Asmussen's Gun Runner trainees, all Winchell Thoroughbred homebreds, had their first timed gate works at Keeneland. The first, a colt out of SW Louisville First (Girolamo) named Under the Gun went a half mile in :47.40 (5/38). Asmussen said he told his team to slow down the next set. Red Run, a colt out of the Tapit mare Red House, breezed in :47.80 (8/38) while Gunite, the son of 2015 Bolton Landing S. winner Simple Surprise (Cowboy Cal), worked in 49.20 (19/38).

“It's not hard on them to move fast,” Asmussen noted. “Gun Runner was that way too. We had Gun Runner at Keeneland at a similar time when he was a 2-year-old, and it was the same thing-very intelligent, athletic and forward in his training. He was capable of working and training and racing as fast as horses can do.” 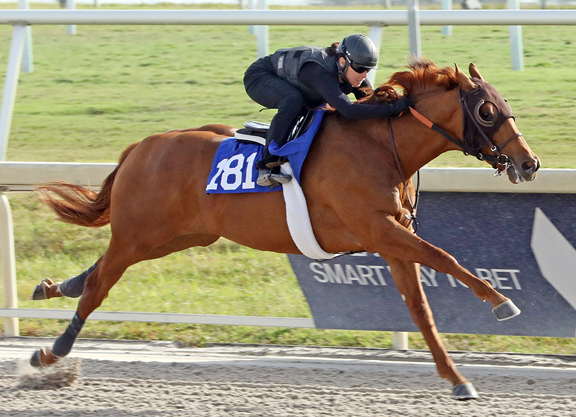 Another Gun Runner that may not be too far off from debut made headlines a few weeks ago at the Fasig-Tipton Gulfstream Sale. Selling as Hip 181, the colt out of the stakes-winning Ohio-bred mare Needmore Flattery (Flatter) brought $1.7 million as the second-highest purchase of the sale. Agent Gary Young purchased the April foal on behalf of Zedan Racing Stable to train under the tutelage of Bob Baffert.

“He was the spitting image of Gun Runner,” Young recalled. “There was no DNA test necessary for him. I loved his work on the track and then I went to see him and I thought him and the Nyquist [Hip 28, $2.6 million sale topper] were two very, very nice colts. Between Baffert, Mr. Zedan and I, we decided that the Gun Runner would be the one we would go for and we were very happy to get him.”

Young reported that the colt is now thriving in training at Santa Anita.

“He's galloping there and Bob is very happy with him,” he said. “His barn habits are terrific. He goes to the track and trains and then goes back in his stall and lies down and relaxes all day. So there's absolutely no buyer's remorse so far.”

Young explained that he has always expected Gun Runner's progeny to progress early on in their career.

“Gun Runner was built like a fast horse and he was a very athletic horse,” he said. “I wasn't surprised that the Gun Runners are showing precocity, but the people who are more surprised probably base that on how Gun Runner got better as his career progressed. He wasn't a bad two-year-old or three-year-old, he just wasn't dominating as much as he was later on when he was practically unbeatable.”

Young recalled watching Gun Runner train in California leading up to his memorable victory in the GI Breeders' Cup Classic.

“This horse trained like there was no way he could lose that race. You could tell by watching him train that it was going to take one hell of a horse to beat him. He definitely got better as he got older, but he was a good 2-year-old too, which is a very good combination.”

Speaking from his hotel in Ocala, Young said he has his eye on a few more juveniles by the same sire at the upcoming OBS Spring Sale.

On the first day of the OBS breeze show on Monday, a Gun Runner colt selling as Hip 118 from the Eisaman Equine consignment and out stakes winner Salamera (Successful Appeal) fired a :10 bullet.

Consignor Barry Eisaman said he was not surprised by the speedy work.

“His breezes had been showing us that kind of speed any time you asked him,” he said. “He's a really big colt and a classy mover. It's astonishing that he has as much speed as he does because he doesn't look like a sprinter at all; he looks like a classic, two-turn sort of creature.”

Eisaman said that he has worked with roughly half a dozen Gun Runner juveniles at his farm this spring. 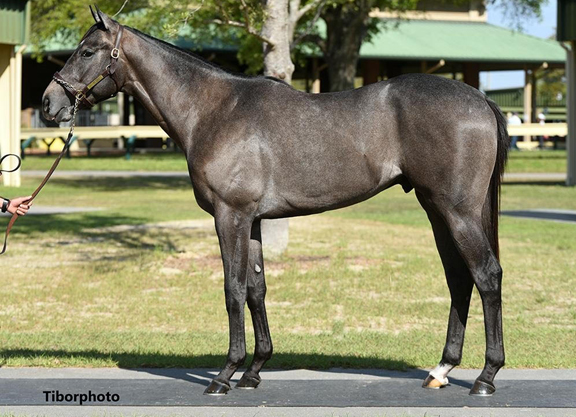 “All of them have excellent minds, including this colt,” he noted. “This colt will work like that and then come back and act like a sensible 3-year-old. Nothing rattles him. If I was rooting for Gun Runner's success with his first crop, I would think he has a pretty good chance.”

Eisaman said he was once a believer that Gun Runner might not see a fast start at stud with his first 2-year-olds, but that working with them this year has proven him otherwise.

“All the Gun Runners that I have act precocious,” he said. “When I was looking at them as yearlings or when we were first breaking them and watching them gallop, I would have agreed wholeheartedly that they're probably going to be later. But as I started to do little baby breezes with them, they all displayed plenty of speed.”

A winner in his first two starts as a juvenile, Gun Runner should have all the potential to produce the same with his first runners. But even so, just as the best was still to come for Gun Runner's career, the same may be said someday for his progeny.

“He was a special talent,” Asmussen said. “As we all know, he was very good at two and three against good company, but he was Horse of the Year as a 4-year-old. Who he was at four and five is as good as it gets, so it's hard to measure that. We were pleasantly surprised that his progeny are showing plenty of ability now, like him, but the exciting part is the fact that his last four to five starts were so phenomenal and when he retired at five, he was still trending up.”