Home » Archive » Shared News » Don't Get Ticked: Know the Risks Ticks Pose and How to Protect Your Horse

Don't Get Ticked: Know the Risks Ticks Pose and How to Protect Your Horse 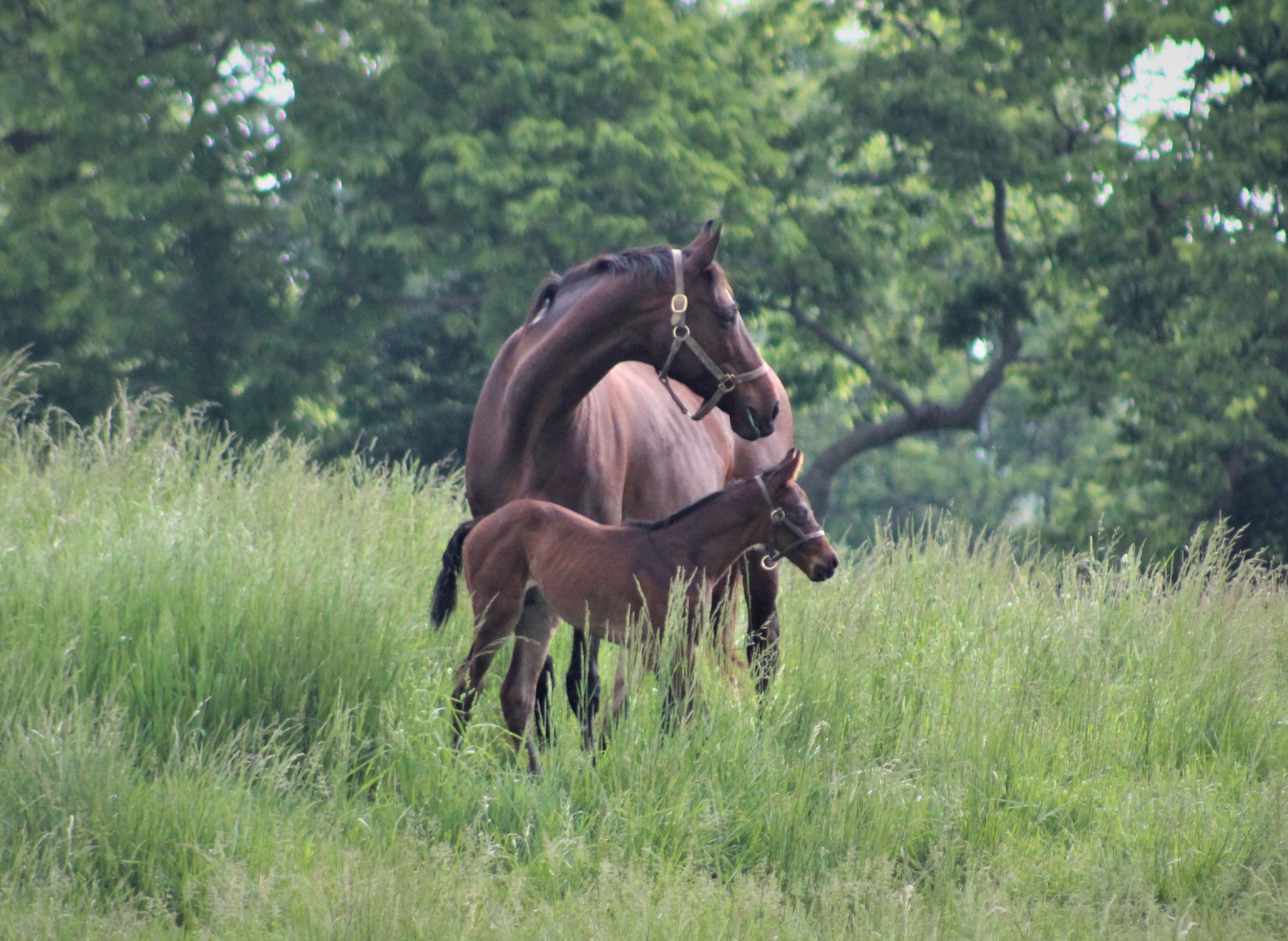 Over the past decade, researchers and laypeople alike have noticed an increase in the prevalence of ticks throughout the Midwest. Some blame this “uptick” in ticks on global warming, while others attribute their proliferation on the increasing populations of wildlife in some areas.

This increased population of ticks can put horses and other farm animals, as well as those taking care of them, at risk for tick-borne diseases, which means it is not only important to know how to manage and/or prevent them, but also how to get them tested for infectious diseases.

Ticks gravitate to wooded and/or grassy areas, which means the average horse farm is a prime habitat for these parasites. They crawl to the tops of blades of grass, and with their front legs outstretched, then attach to their hosts as they walk by or are grazing. While some may bite immediately, many will make their way to a warm and somewhat protected area of their host where the skin may be thinner, which on horses is often the forelock, mane, tail or inside of their flank, though they can also be found on other parts of a horse's body.

Once a tick attaches to its host, it will fill with their blood, at which time they can also transmit bacteria, diseases and/or blood parasites, before dropping off to molt, and in the case of female ticks, to lay eggs.

In addition to their bites causing skin irritation, ticks can carry and subsequently infect their equine host with a bevy of serious diseases. According to the American Association of Equine Practitioners (AAEP), the most common tick-borne diseases that pose a threat to equines in North American are Equine Piroplasmosis, Lyme Disease, Equine Granulocytic Anaplasmosis (Ehrlichiosis) and Tick Paralysis.

Equine Piroplasmosis (EP) – This blood-borne protozoal infection causes fever, reduced appetite, anemia, exercise intolerance, weight loss, labored breathing, and colic and the mortality rate can reach 50 percent. Blood tests are used to diagnose EP and horses that test positive must either be placed under quarantine and enroll in a USDA-APHIS-approved treatment program until all diagnostic tests are negative or be euthanized.

Lyme Disease – Most commonly transmitted by the deer tick (Ixodes scapularis), Lyme Disease is a bacterial infection that can cause swollen and/or painful joints, uveitis, stiffness/lameness, low-grade fever and chronic weight loss, among other symptoms. Drugs such as doxycycline or oxytetracycline have been successful in treating infected horses. A rarer form of Lyme Disease is neuroborreliosis, which occurs when the bacteria affects the horse's central nervous system and can be fatal.

Equine Granulocytic Anaplasmosis (Ehrlichiosis) – This seasonal bacterial tick-borne disease can cause fever, depression, mild limb edema and ataxia. While younger horses (>1 year) may present with a fever only, adult horses will likely present with multiple symptoms and geriatric horses may be affected more significantly. Oxytetracycline is an extremely effective treatment, and horses with severe ataxia and edema may also benefit from a short-term course of corticosteroids and an anti-inflammatory.

Tick Paralysis – Though rare in horses (the first North American cases were reported in 2019), Tick Paralysis will present as weakness, labored breathing, reduced coordination/stumbling and lack of appetite and quickly evolve into recumbency. Affected horses may also incur secondary symptoms, including pressure sores, corneal ulcers, pneumonia and sepsis. In the initial U. S. cases, it was found that horses regained neurological normalcy within 48 hours of the removal of the ticks. The tick bite sites were also treated with topical permethrin.

Ticks infected with any of the diseases mentioned do not typically transfer their pathogens immediately. Rather, they typically attach themselves and feed for up to 24 hours before disease transfer occurs. As such, checking horses daily for ticks and removing them as soon as possible is imperative in preventing tick-borne diseases from infecting a horse.

Since many ticks are quite small, it is often easier to feel for ticks then to see them, so be sure to run your hands over your horse thoroughly, especially their mane, forelock, tail and inner flanks.

The AAEP advises that should you find a tick/ticks on a horse, put on gloves (latex or nitrile) and grasp the tick with your fingers or tweezers as close to the head as possible and slowly and firmly pull it straight up from the site of the bite. Put the tick in a jar filled with rubbing alcohol to kill it, along with any disease it may be carrying. Then, wash the bite site and your hands with a mild antibacterial soap.

When removing ticks from horses or other animals (or yourself), do not:

– Do not crush or twist the tick while it is attached to the horse (this will cause it to regurgitate blood back into the animal, increasing the chance of infection or disease transmission).

– Do not apply baby oil, petroleum, nail polish, etc. in an effort to smother the tick (such efforts are not effective and can cause skin irritation to the horse at the bite site).

– Do not attempt to detach the tick with a lit match (this method is ineffective and can cause serious risk and injury to the horse).

Removing brush and keeping pastures mowed is an easy and effective way to deter ticks.

Not all fly repellants deter ticks, but topical insect sprays, powders and wipes containing coumaphos, pyrethrins, synthetic pyrethroids and seta-cypermethrin are an effective way to protect horses from tick bites. Name brands such as Co-Ral, Deep Woods Off and Frontline spray have proven efficacy against ticks.

Orally administered ivermectin or moxidectin dewormers are effective against ticks, however a tick must take a blood meal from the host horse in order for it to be effective. Amitraz, while effective in treating dogs for tick infestations, is toxic to horses and should not be administered.

Pyrethrin, Permethrin, Cypermethrin and commercial grade pyrethroids can be applied to pastures to kill ticks in the environment, but label directions should be followed closely and careful consideration should be made for pastures containing foals three months or less in age.

The University of Kentucky College of Agriculture, Food and Environment's Entomology Department is currently conducting a tick surveillance study to identify what areas have higher concentrations of ticks carrying infectious diseases.

Dr. Reddy Palli, Entomology Department chair and a state entomologist, says he and his team began surveying ticks throughout Kentucky roughly two years ago. In that time, they have been able to gather significant data for their study.

“We are conducting surveillance, speciation and pathogen screening of ticks collected in Kentucky in order to inform the public about the presence of ticks and the pathogens they carry,” said Palli. “In general, there seems to be an increase in tick-borne diseases. Many factors could contribute to this, such as climate change, increases in tourism and deforestation.”

If you find a tick and want to submit it to the study for pathogen testing, you can fill out the submission form and send in the specimen (instructions for how to prepare the specimen can be found here). The study team will alert those who send in ticks if any pathogens are detected in the ticks they submit.

Depending on your county and state of residence, your local extension office may offer the option for you to submit ticks for testing via mail (in a sealed plastic container with an alcohol-soaked cotton ball) and will contact you if the tick(s) test positive for any pathogens.

“For those outside of Kentucky, land grant universities have extension entomologists that may be able to help [with similar resources],” added Beth Wilson, a Kentucky Horticulture Agent.