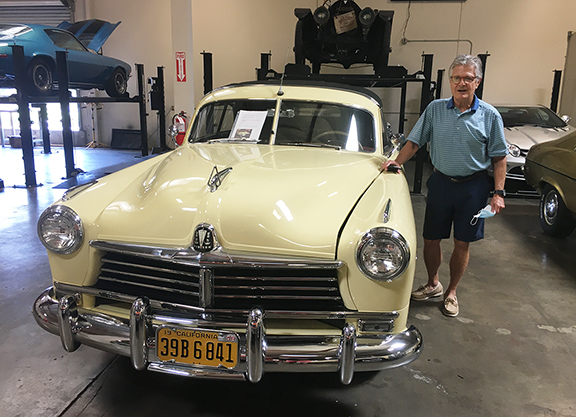 In a vast cavern of a building like an aircraft-hanger just a tad more than a stone's throw from Newport Beach is a sparkling chrome vista that would set any motorhead's heart a flutter. This waltz through recent history takes you from a sturdy-looking 1931 Ford Model A to a plushly upholstered 1948 Hudson Commodore to a 1956 Ford Thunderbird Convertible the color of a brightly polished London bus, and onwards.

The oldest, most venerable member of the gang is an open-topped 1911 Hudson Speedster—a throw-back to a bygone era of over-sized motor-goggles and Ahooga horns and white scarves fluttering in the wind. Among the rarest is a '42 Hudson Super Six Wagon—one of only a few surviving “Woodies.”

This gleaming sea of combustion engine antiquity falls under the banner of Crevier Classic Cars, owned and founded by the eponymous Donnie Crevier, one of those silver-peaked coastal-kept California septuagenarians who for decades has remained tanned and trim out on the waves, and an old-fashioned people person, you might say.

“We have some of the nicest people in any industry representing us, and it makes all the difference,” said Crevier, 75, about his broad Crevier car empire familiar to many a BMW owner in this particular slice of Southern California (more on this in a bit). “I want character—people who care about people.”

We were perched in his office, the wall of clear Perspex between us a ubiquitous reminder that these are anything but normal times. Similarly clear is that the niche universe of vintage motors is an apt amalgam of Crevier's approach to racehorse ownership.

He's been in the sport since 1988, on and off. Never a big-time player. More a horse here, a leg there. And yet, the collector's eye evidently extends to all sorts of horsepower. His first graded stakes winner was the Tim Yakteen trained Bench Points, the precocious son of Benchmark who landed the GIII Lazaro Barrera S. at Hollywood Park after picking up a brace of listed victories at two.

Then along came full brother Points Offthebench, who in the summer and fall of 2013 showed enough when winning the GI Bing Crosby S. at Del Mar and then the GI Santa Anita Sprint Championship S. to warrant a leading chance in that year's Breeders' Cup Sprint, only for fatal injury to intervene on the eve of the contest. Bittersweet compensation came at the following Eclipse Awards, when Points Offthebench was posthumously awarded Champion Sprinter.

Crevier's latest runner with an oh-so-smooth engine is the 7-year-old mare Cordiality, who Yakteen claimed out of the Peter Miller barn in February of last year. Since then, Cordiality has won half of her four starts, both of them listed contests, including the Osunitas Stakes at Del Mar earlier in this meet.

While Cordiality may not have the same stratospheric talents as a Points Offthebench, she has another chance this weekend to enhance her own estimable roll-of-honor. She's entered in the Solana Beach S. at Del Mar this Saturday.

“I don't want to make any predictions,” Crevier said, “but we're hoping for a very good race.”

Click here to read this story in its entirety in the TDN Look.