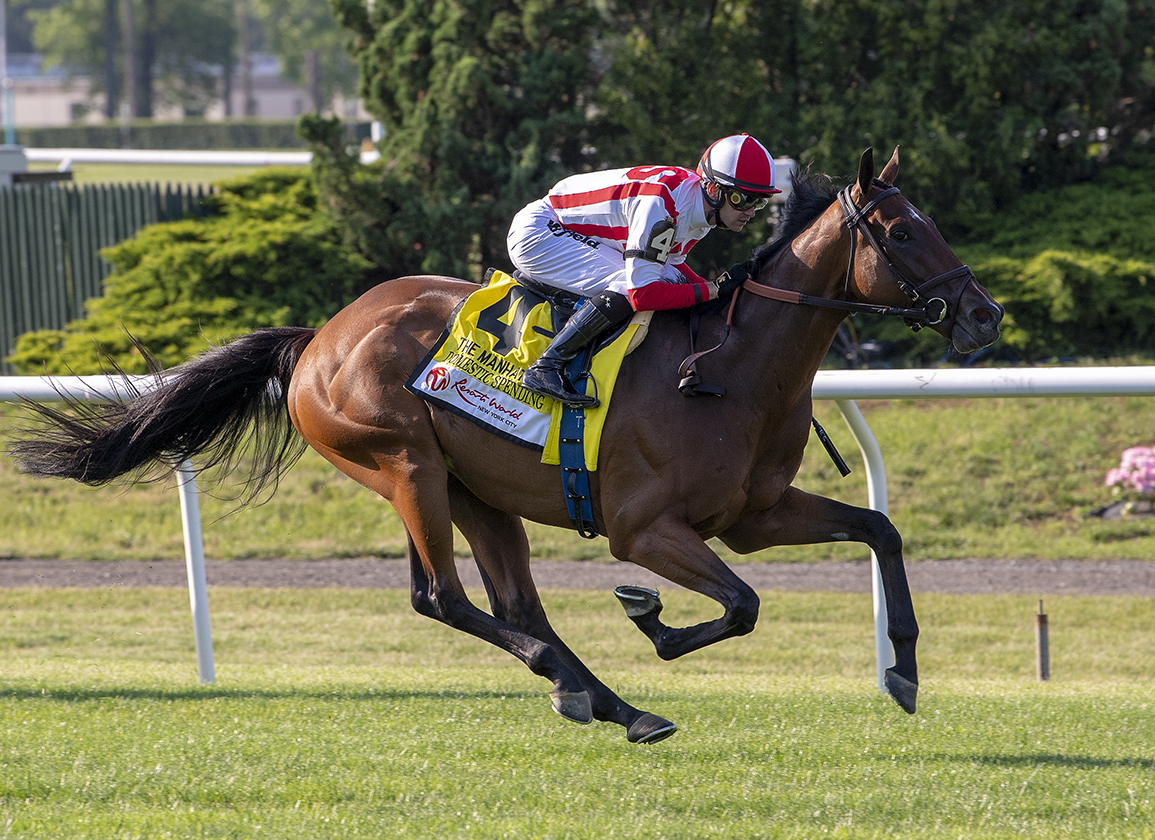 Coming off a dead-heat score with Colonel Liam (Liam's Map) in the May 1 GI Old Forester Bourbon Turf Classic at Churchill Downs on Derby day, Domestic Spending was made the 3-2 favorite while seeking his third straight win at the top level. The bay gelding dropped well back and raced in the clear as Tribhuvan (Fr) (Toronado {Fr}) led the strung-out field through fractions of :23.81 and :46.95. Some 10 lengths back heading into the far turn, Domestic Spending made eye-catching progress turning for home. Fanned six wide at the top of the lane, he closed stoutly, switching leads late to spurt past the pacesetter and power clear. Tribhuvan held on for second, while Gufo (Declaration of War) closed from last to be third.

“We had a good trip,” said winning rider Flavien Prat. “He broke well and I got him to relax all the way around there. It was a pretty strong pace. When it was time to make a move, he responded very well. Then, he was floating a little bit down the lane when he was by himself. He ran a good race. He went a mile and a quarter well today. He showed a good turn-of-foot last time and today, with the strong pace it's hard to show the same turn of foot and he did. I think I had more in reserve. He was floating a little bit down the lane, but I felt that I had more horse.”

“This has been an important race for us,” Brown said. “It is one of the premier turf races for males at a Classic distance in the country and I hold it in high regard. We point for it every year, and I've been so lucky, me and my team, to have some good horses through the years to work with.”

Domestic Spending, a 300,000gns TATOCT yearling, was a debut winner at Tampa Bay Downs last February and, following a Belmont allowance tally in June, suffered the only loss of his career to date with a third-place finish in the July 18 GII National Museum of Racing and Hall of Fame S. He rebounded to get his head in front of Gufo to win the Aug. 15 Saratoga Derby Invitational and was a head to the good of Smooth Like Strait (Midnight Lute) in the Nov. 28 GI Hollywood Derby. He returned from a six-month layoff and closed late to hit the wire in step with Colonel Liam in the Turf Classic.

“[Domestic Spending] has been a particular challenge,” Brown admitted. “We had to geld him after his 2-year-old year, even with that breeding, because he wouldn't train. We had several different people on our team working with this horse, down at Stonestreet [in Kentucky] and down in Ocala. So many people have touched this horse and really worked with him and got his natural ability out of him. The latest is Flavien, who is now getting along just terrific with this horse. It's really my team. They've done an outstanding job developing this horse. There was a point in time when he was a baby that I didn't think we'd ever get him to the races.”