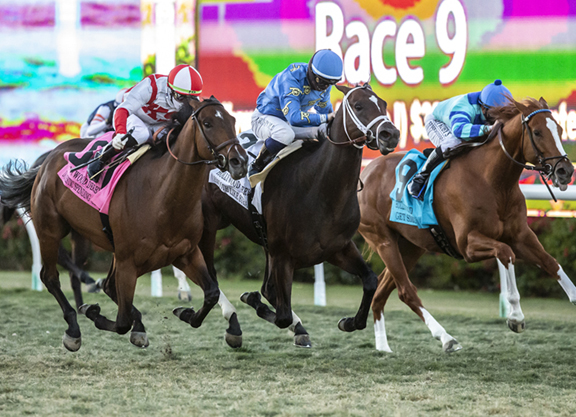 Saturday's GI Hollywood Derby at Del Mar was a tiebreaker of sorts. Since the closure of Hollywood Park in 2013 and with the race transferred to the seaside venue, the locals (California Chrome, Chiropractor and Mo Forza) and ship-ins (Annals of Time, Mo Town and Raging Bull {Fr}) had split the six runnings. Following a pair of scratches, seven California-based sophomores took on a formidable foursome from the East Coast, and when the dust had settled after nine very entertaining furlongs, Klaravich Stables' Domestic Spending (GB) (Kingman {GB}) had tilted the scales in that direction with a narrow defeat of Smooth Like Strait (Midnight Lute). Gufo (Declaration of War) was third.

The fourth of the right-coast representatives, last-out GII Hill Prince S. upsetter Get Smokin (Got Stormy), pinged the gates and took the Derby field out of the chute and onto the main track, as Smooth Like Strait made full use of his low draw to race handy at the fence before being steered out into the two path with a little less than seven-eighths to travel. Domestic Spending raced with just one rival behind-the late-running Gufo. Get Smokin controlled the pace through an opening half-mile in a modest :48.23, a tempo that gave him and Smooth Like Strait a tremendous tactical advantage over the back markers, each of whom raced with the benefit of some cover.

Positions were more or less unchanged until the three-eighths marker, when Irad Ortiz, Jr. began to get after Domestic Spending three and four wide around the bend and Flavien Prat set Gufo into motion, following the move of Domestic Spending five wide into the lane. On the business end, Get Smokin was still full of run given the pace and he raced as a team inside of Smooth Like Strait into the final furlong. The latter finally edged past the stubborn front-runner, but Domestic Spending was in full flight and was up in the final two jumps. Gufo also flashed home, but the wire came first.

“I thought I was going to be closer with him, but he came out of there a little slow and we were in the back,” the winning rider commented. “I worked my way up on the backside and he was running perfect. When I asked him for his run at the three- eighths (pole), he was ready. He really put in a nice kick. He's been a little green in his earlier races, but he's getting better all the time.”

A debut winner at Tampa in February, Domestic Spending returned from a four-month absence to best subsequent SW & GSP Don Juan Kitten (Kitten's Joy) in a June 7 Belmont allowance ahead of a third to Decorated Invader (Declaration of War) and Get Smokin in the GII Hall of Fame S. at Saratoga July 18. The gelding was last seen getting the better of Gufo by a head in the Saratoga Derby Aug. 15.