'Doc' a Juddmonte Linchpin From the Beginning 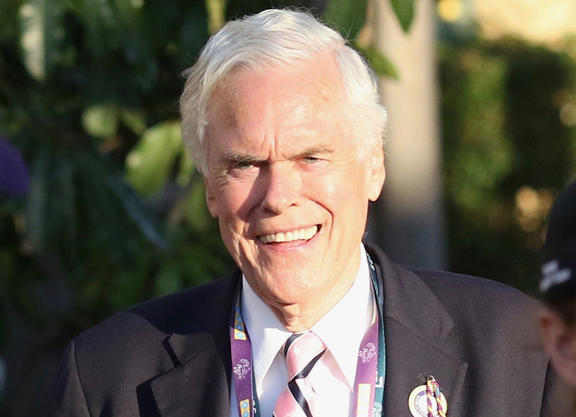 This is Part I of a wide-ranging interview to be concluded in next week's TDN.

“I've seen too much to know anything,” said Dr. John Chandler. “I really have. I've seen horses raised on tennis courts that turned out to be multiple Group 1 winners. They never saw a blade of grass, they were practically fed oats and lawn clippings. And I've seen horses that spent half their life in stalls with screws in their leg, come out and win multiple group races. You know, they always say the longer you do, the less you know.”

That, right there, is pretty much the definition of Socratic wisdom. The more you know, the more you realize how little you know. But after more than half a century working with Thoroughbreds–as a veterinarian; as the husband of another venerable achiever; and as the linchpin of one of the greatest breeding operations in history–Chandler has left very few acres of the turf uncharted. His conversation, though reliably sieved through humor and self-deprecation, is strewn with insights arising from his intimacy with some of the great names of the modern era, on two legs and four.

When he joined his Juddmonte colleagues in the winner's circle at the Breeders' Cup last fall, first with Expert Eye (GB) (Acclamation {GB}) and then with Enable (GB) (Nathaniel {Ire}), he represented a cherished incarnation of the years of patience and skill underpinning the families developed by Prince Khalid Abdullah. Some other key contributors had long since moved on from Juddmonte, like James Delahooke, Guy Harwood and Tony Chapman; others, sadly, had been taken from us prematurely, like Bobby Frankel and Sir Henry Cecil. But here was the abiding link: a constant sounding board, virtually since an unknown, softly spoken Saudi prince first started buying yearlings through Humphrey Cottrill in the late 1970s.

Cottrill only picked up the commission because another agent of the old school had turned it down. Wally Swinburn was riding for an owner in India who told him that he had an Arabian friend keen to buy some horses. Swinburn went to George Blackwell and said, “George, I've got this little Arab who wants to buy a few horses.” And Blackwell replied, “Oh, I don't know. He's going to buy cheap horses, won't pay his bills. I'll pass.”

The Prince would actually give Blackwell the chance to redeem that misjudgement a few years later. In the meantime, however, on Cottrill's retirement he turned to Delahooke–for whom Chandler was already vetting horses at the American sales.

Even as late as the mid-seventies, doing this had already put his clients ahead of the game.

“Not only were they not vetting horses, they weren't even walking them,” Chandler recalled. “They'd bring the horse out of the stall. Stand him there. Walk around him. Look him up and down, and put him back in the stall. But then Ray Barnes came over and started walking them, and then so did Tom Cooper and Vincent [O'Brien].”

Chandler had become good friends with Barnes during a stint in Newmarket. So it was natural for them to reconnect when Chandler moved to Kentucky. Barnes started coming to Keeneland and, naturally, Barnes recommended his local man once Delahooke and Harwood began shopping there too. Their patron took to Chandler, and in 1982 put him on a retainer. So began an association that has hitherto seen Chandler serve 33 years as president of Juddmonte's U.S. division.

There was already a connection, to be fair, in that the Prince's American mares had been boarding–pending acquisition of a local farm, the same year–at Mill Ridge, which had been built up from the parcel of Chandler's father-in-law's Hal Price Headley's historic Beaumont Farm inherited by his wife Alice.

Chandler had met Alice after joining Ed Fallon's veterinary practice in Lexington. Fallon's father had been the Beaumont farm manager and Mill Ridge, in turn, became his principal client.

“I came out with Ed to examine some mares,” Chandler recalled. “And she got in the front seat of the car, a good-looking woman, and horsey. My kind of woman. Very smart. She knew what she wanted, and how to manage a farm. She'd obviously learned from her father, who was one of the smartest fellas. We sort of built it up together–but what made our life so good, I think, was the fact that she had Mill Ridge, and was running it her way, and I had Juddmonte, running it my way.”

Though largely raised and educated in urban Pretoria, Chandler had never had the slightest doubt about his vocation.

“I can remember, ever since I was about five or six, saying I was going to be a vet,” he said. “I was just very much taken, from afar, with horses. When I was in college, I started to go racing a lot. Then this man I'd done something for, he had this filly out of training that was no good, so he gave her to me. My friends from veterinary school would go over with me and watch her work. They'd say, 'You better bring your kitchen clock to time her.' But I sort of created an image for myself that I was the horse student. If there was an interesting clinical case coming to the clinic, they'd say, 'Go and find Chandler, he might be interested in this.'”

He learned much from holidays working on the Birch brothers' farm in the Eastern Cape, Sydney Birch in particular proved to be a valuable mentor.

“They had very strict rules in South Africa about bleeding,” he recalled. “If a horse bled twice in a race he was ruled off permanently. And there were no bleeding medications, or anything like that. So one or two of those were given to me [by the Birch family]. And I would take them up to the bush, in the Northern Transvaal, and race them.

“They'd race on Boxing Day, so on Christmas night I would get on the train with the horse, a four or five-hour ride. And a friend of mine had a pick-up truck, and we'd put the horse in the back and take him off to the races. I remember once I was third in the first race, at 11:00, and then won the sixth race at 5:00–with the same horse. They just cleared a track in the bush. When I say bush, it was a real jungle. I mean, there were lions and things around. It's wild country up there.”

On graduating, Chandler spent £50 for a passage on the Southern Cross from Cape Town to Southampton. It was 1964, a golden time to be exploring Europe with friends. When the money ran out, he found a junior position under Fred Day in the premier veterinary practice in Newmarket. The three years he spent there served as a fulcrum between his native land, and education, and the new life he would forge for himself in the Bluegrass. For instance, he became fast friends with Cecil Boyd-Rochfort's stepson and assistant: a young man named Henry Cecil.

“Henry was one of my drinking buddies,” Chandler said. “I used to go up to Freemason Lodge in the evening and we used to sit and complain how downtrodden us assistants were. With Henry, and his brother David, who was at Plantation Stud, we used to have a good party circuit.” He paused and smiled “A very good party circuit.”

Neither Cecil nor Chandler could know the professional dividends that would ultimately accrue from their frolics. In the meantime, Chandler was intent on broadening his horizons once again. After a December sale, he hitched a ride to the U.S. in an air freighter with 30 broodmares and then jumped in a van taking one of them to Kentucky. Here he had an introduction to Professor Jack Bryans, an equine researcher at the University of Kentucky, who introduced him to his brother-in-law: Ed Fallon. The two hit it off at once and–after criss-crossing the nation with a 99-day, $99 Greyhound bus pass–Chandler was offered a job in Fallon's practice, Hagyard, Davidson and McGee.

One way or another, then, by the time he fell into step with Delahooke and Harwood and their polite, elegant Saudi patron, Chandler had established an unusually cosmopolitan eligibility. Juddmonte also benefited from the day-to-day services of Walter Zent, one of the world's leading reproductive vets; while Michael Youngs offered valued matings counsel. In due course, Tony Chapman would play an important role, not least in the purchase of the Newmarket farm, Banstead Manor. Above all, however, Chandler stresses the good early fortune of having Delahooke's shortlists.

“James had ultimate confidence in himself, but was entitled to it,” he said. “He had a great eye. He'd look at two yearlings that, to me, were very similar. And he'd say, 'That's a racehorse, and that's not.' And he was right, so many times. Of course we bought some duds too. But he was a hell of a judge.”

From the outset, the idea was to establish families.

“It was a very small operation those days,” Chandler said. “In 1980, there was a handful of mares. I think it was '81 that Known Fact had gone to stud. Then when he bought the farm here from Dr. Schnapka and there were 18 broodmares that came with it–including Fleet Girl [fourth dam of Enable]. And then we bought a few young fillies, like Bahamian [third dam of Kingman].”

Rockfest, third dam of Frankel, came in a private package from Jock Whitney, who had horses with the Prince's first trainer Jeremy Tree; while Sookera, granddam of the Juddmonte legend Hasili, was acquired from Robert Sangster.

“But we bought very few mares, really,” Chandler reflected. “Image Of Reality, she threw Toussaud. She was a dumb mare, Image To Reality. But Toussaud was dumb times crazy. She was something else, Toussaud.”

Something else is right. Literally so–as that's another story, along with her late trainer, Bobby Frankel, and the champion subsequently named in his honor. We'll resume with those in the second part of this interview next week.