Do Fillies Really Improve When Racing In Foal? 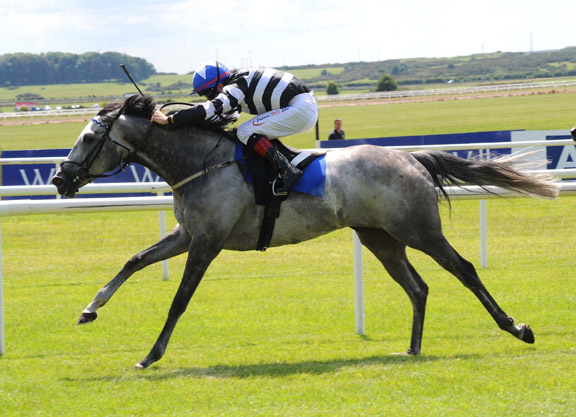 The great triviality that is horse racing is full of unanswered questions, most of which are destined to remain unanswered for as long as thoroughbreds are raced. However, for the first time, one such question can finally be addressed using robust statistical evidence that has never before been collected or examined.

The effect that being in foal has on the racing performance of fillies has been the subject of discussion for decades. Every year without fail, fillies win races in the 120-day period during which they are permitted to race after being covered. There are multitudes of examples of this occurring from the lowest levels of the sport right up to the headline-making Group 1 wins of in-foal fillies such as Indian Queen and Chinese White. All of these successes have understandably served to reinforce the commonly-held theory that pregnancy can often correlate with improved racing performance in fillies.

On the face of it, the theory seems to carry plenty of weight. As well as masses of anecdotal evidence, there are seemingly sound physiological explanations for why pregnancy could well lead to an improvement in racing performance.

It is well known that being in season can detrimentally affect both the behaviour and racing performance of fillies. Thus, the fact that fillies cease to come into season once they are in foal is considered a significant positive offshoot of pregnancy in a racing filly. As well as that, the calming effect of the hormone progesterone which is produced during pregnancy could also have a positive impact on racing performance.

That said, there has always been the possibility that the perception of this apparent correlation has been exaggerated by the confirmation bias caused by the racing public only tending to be made aware of or take notice of the fact that a filly is in foal after they have won a race. Sceptical observers suggest that there are likely to be multitudes of in-foal fillies that race without success that the racing public doesn’t hear about and that if we were privy to all of those, the full set of data would show that it isn’t the key to improvement that many consider it to be.

While there has been unending conjecture on the subject from both sides of the debate, until now the matter has progressed no further than that. The primary reason for this is that while it has been considered on numerous occasions in multiple racing jurisdictions, it has never been made compulsory for trainers to declare if the fillies in their care are in foal. This lack of reliable official information has made it difficult for anyone to draw a robust evidence-based conclusion on the matter.

However, Weatherbys require owners/breeders to report the last date that a filly or mare was covered by a sire, as well as the result of that covering, including the date that those which successfully carried their pregnancy to full term give birth to their foal. It is thus possible to obtain that information from Weatherbys and cross-reference it with a racing form database on a case-by-case basis to identify those that raced after their last covering date and subsequently carried their pregnancy to full term.

By only including fillies and mares that carried their pregnancies to full term, we can be all but certain that they were indeed pregnant in all of their runs that came after the date of their last covering. Thus, this methodology is exceptionally unlikely to throw up false positives and therefore provides a reliable set of data.

As is the case with any statistical study, one of the most important requirements is that there is enough data collected to make the conclusions drawn from it as reliable as possible. With this in mind, I examined all the data from the seven years from the beginning of 2009 through to the end of 2015. This resulted in the identification of a total of 443 qualifiers that raced on the Flat in Great Britain and Ireland while in foal.

Once this set of data was isolated, the next step was to come up with a fair methodology to assess their racing performance whilst pregnant. In terms of the basics, the number of runs and wins after their last covering date was recorded in each case. After that, ‘improvement’ was defined as registering a career-best Racing Post Rating while in foal. This improvement was then measured by the difference between their best pre-pregnancy rating and their best rating whilst pregnant.

The research revealed that 443 in-foal fillies and mares had a total of 1,549 starts while pregnant, an average of 3.5 starts each, and they achieved a win strike-rate of 8.26%. To put that into context, the win strike-rate of the entire population of 3-year-old and older fillies and mares in Great Britain and Ireland in the same period was 9.35%. Thus, the strike rate of pregnant runners was 11.7% lower than non-pregnant fillies and mares. This is a statistically significant difference that would not have been at all expected by many.

What makes this so surprising is that even if pregnancy had no positive effect on racing performance, it would have been expected that the strike-rate of pregnant runners would have been higher than that of non-pregnant runners, as there is almost certainly a positive selection bias at play in the pregnant group. As well as it being likely that the quality and pedigree of those chosen to race while pregnant would be above average, what is certain is that with trainers having a maximum of just 120 days to race them while pregnant, they would be pulling out every stop to get them in the winner’s enclosure and/or show improvement. Thus, for them to have a below-average strike rate is very much an unexpected eye-opener.

There were more surprising results to be found when the sample was examined in search of how many of the pregnant runners showed improvement. Just 67 (15.1%) produced career-best efforts while pregnant, with the average rate of improvement being 5.8lb. A total of 13 (2.9%) improved by 10lb or more and 23lb was the most improvement shown by an individual. While there isn’t an appropriate means to compare these percentages against the overall population as was done with the win strike-rates above, given just how widely it is considered that pregnancy brings about improvement in racing performance, that 84.9% of the fillies/mares in this sample did not show any improvement is surprising.

While it remains to be seen whether this significant new evidence will have any effect on the popularity of putting fillies and mares in foal while they are in training, it will hopefully serve to better inform breeders, pundits and the racing public in how they consider such situations.

Notes:
Fillies/mares that were returned as having aborted early, slipped their foal or as having no return were not included in the above data sample. While there is a chance that they were in foal when they raced, there isn’t enough specific detail returned officially to allow us to be sure whether they were or not, so in the interests of the integrity of the sample they were left out.

Fillies/mares that were returned as having given birth to a dead foal, a foal that died after birth or a foal that was born abroad were all included in the data sample, as all of them carried their pregnancy to full term, which is what is relevant to this study.

With regard to the time period used for this study, it is worth noting that the win strike-rate of all 3-year-old and older fillies/mares in Great Britain and Ireland went through a significant gradual change in the last 15 years or so. It increased from an average of 7.76% between 2003 and 2008 to 9.35% between 2009 and 2015. This is likely to be attributable to the growth of the programme of races for fillies and mares. Thus, in an effort to make this study as reflective as possible of the current situation and programme book, the time period of the seven years from 2009 to 2015 was selected, as the fillies/mares strike-rates remained quite stable in this time.

The study did not include data from the 2016 racing year as the returns from breeders for their 2016 coverings were very much still incomplete at the time of writing.

One of the most eye-catching qualifiers in this study was Your Gifted. Having been covered on May 13, 2011, the sprint handicapper raced more times (15), won the joint-most races (four) and showed the joint-second highest amount of improvement (22lb) when in-foal than any other qualifier in the seven years examined. While the foal she subsequently produced didn’t show much ability on the track, Your Gifted was put back in training the year after giving birth and has gone on to win five more races. She is still racing and has had more than 100 career starts.