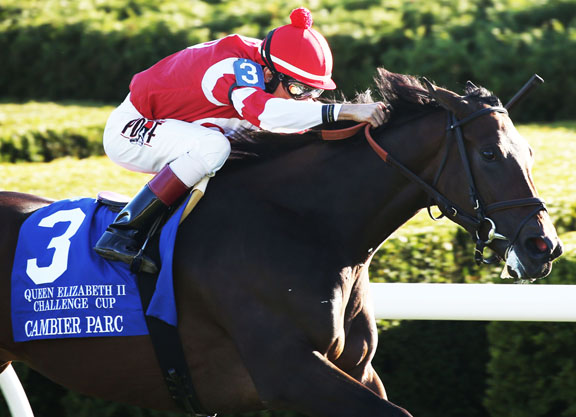 William and Donna Shively's Dixiana Farm is the new sponsor for the $500,000 GI Queen Elizabeth II Challenge Cup, one of this country's most prestigious races for 3-year-old turf fillies. The QE II Challenge Cup Presented by Dixiana will be held on the second Saturday of Keeneland's fall meet Oct. 10.

“Keeneland is pleased that Dixiana has become the sponsor of the Queen Elizabeth II Challenge Cup,” Keeneland President and CEO Bill Thomason said. “Dixiana has been a valued corporate partner through its sponsorship of other stakes at Keeneland, and the Shivelys are enthusiastic participants in our racing and sales. We are thrilled with Dixiana's new association with such a highly regarded international event as the Queen Elizabeth II Challenge Cup.”

The Shivelys purchased Dixiana in 2004, a 700-acre breeding and racing operation in Lexington that dates back to 1877 when it was founded by Mayor Barack G. Thomas. He was widely recognized as one of the first to attempt to make a living by breeding and selling racehorses.

“Dixiana and Keeneland both play an iconic role in the Bluegrass and the horse industry, and we are natural partners in promoting the very best in Thoroughbred racing and breeding,” Bill Shively said. “As longtime Keeneland race sponsors, Donna and I are very excited about the opportunity to support this premier Grade I event.”

Dixiana is a previous sponsor of the GI Breeders' Futurity and GIII Bourbon S. at Keeneland.

The Challenge Cup honors Queen Elizabeth II who attended the races at Keeneland in 1984 and presented the trophy to the winner of the inaugural running of the race, Cherry Valley Farm's Sintra (Drone).

The Keeneland Fall meet runs Oct. 2-24 and the track will host the Breeders' Cup championships for the second time in its history Nov. 6 and 7.