Diversity in Racing: The British Experience 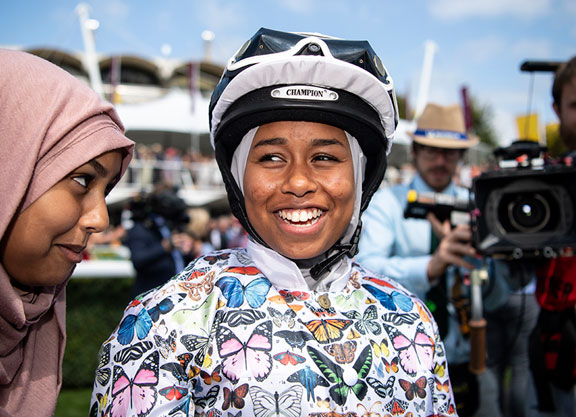 For a window on the diversity of the British Turf, you've probably come to the right place. White, male, middle-aged, straight: all boxes checked there, I think.

But if that is very much the stereotype, then at least the authorities here have acknowledged as much; and there is a corporate determination to do something about it. Nor is this merely some perfunctory response to the incendiary confluence, around the world, of a looming economic recession and the protests triggered by the killing of George Floyd.

Even in 2017, admittedly, action was probably long overdue. It was then that the British Horseracing Authority (BHA) established a Diversity in Racing Steering Group. The following summer, its members–comprising volunteers drawn from across the industry–published an action plan. The most immediate and concrete outcome was the appointment as Head of Diversity and Inclusion of Rose Grissell, who now hopes to harness the heightened political energies of the moment to extend the spectrum of engagement with the sport: whether in terms of participation, leadership or fanbase.

Grissell was heartened, then, when the first female to chair the BHA recently identified diversity as the keynote to racing's prosperity in a post-pandemic world. “We'll be judged by what we all do, not by what we say, and we must do more,” Annamarie Phelps declared in the Racing Post last week.

“Racing's recovery is not about turning the clock back to Mar. 17. It's about seizing the moment to move forward.”

Grissell notes that Phelps, a former Olympic oarswoman who served for five years as chair of British Rowing, brought a useful breadth of perspective.

“Having been in other sports as well, she has seen the difference it can make,” Grissell says. “So I was absolutely delighted to see her setting out how important all this is, for the sustainability of racing. Because the more that people understand the business case, the better.”

For Grissell stresses that she is not just pushing a moral agenda; not just trying to educate people out of prejudice, vital as that is. She argues that if racing professionals want to stay in business, in the long term, they have no choice but to adapt; no choice but to reflect more scrupulously the make-up of society, with all its shades of ethnic, sexual and other differences.

“The Black, Asian and Minority Ethnic (BAME) population of the U.K. is now around 14%, and in London it's more like 40%,” Grissell remarks. “And those numbers are growing. This is our future workforce. These are our future customers. If we're not actually engaging them, getting them interested and asking them to be involved, then how is racing going to survive as a sport? At the time I was recruited, much of the information wasn't necessarily known, but it was acknowledged that we could definitely be doing a lot better in certain areas. And I do think there was also a recognition of the business case around all this, as well as being the right thing to do.

“We tried to whittle down the action plan to areas where we could make the most immediate difference. But we soon realized there was a lack of understanding across the industry. When you're trying to change attitudes, change a whole culture, that's not going to happen overnight. We need as many people on board as possible, so one of our key objectives has been to try and raise awareness of why diversity and inclusion are essential for the sustainability of our sport.”

The conundrum is how to convert the sweeping language of strategy into the detail of tactics. Resources are limited, and must somehow address challenges to some degree endemic in society beyond the sport. So do you target the grassroots, or the leaders and participants who can inspire by example?

“I think you need a bit of both, really,” Grissell argues. “It's the same across all sports, all businesses: nobody has the perfect answer. But obviously some sports have different challenges. So, for example, we're in a good place as a sport where, uniquely, all genders can compete on equal terms; and some individuals with certain disabilities are not affected in their ability to ride. That's something we can really celebrate. We also have a very good gender ratio in our attendances, at around 40-60 [female-to-male], which is much better than many other sports. Again, that's really positive. But then you see the other side, when you look at our senior representation, at board level; or at our participation. There are definitely areas we can improve on.”

And it is a short step from where the sport performs best to some of its most manifest failings. The complexion of the labor force is commendably balanced. Grissell notes that the gender representation, in racing stables, is virtually 50-50; and it is familiar nowadays to see grooms and riders imported from all around the world, notably from the Asian subcontinent, Eastern Europe and South America. Yet while a three-time champion jockey did emerge from Brazil, in Silvestre de Sousa, neither indigenous nor immigrant workforces have been able to add much diversity among those who have managed to break through the ranks.

“Obviously not all jockeys and trainers come through that pathway, but some do,” Grissell says. “And when we look at participation levels, ethnic minorities would be represented by a handful–if that. We have to address why that is. We have to ask why some people are able to get these opportunities, and other people can't.”

Since generic, societal problems may take a generation to resolve, it makes sense for Grissell and her colleagues to focus on specific challenges. For example, they have sought to relieve the LGBT+ community from a perceived hostility–reflected in the number of jockeys to have “come out” while still riding. (That number being… one!)

This is one area where Grissell feels racing has been able to profit from example elsewhere. “We've seen many sports achieve growing awareness through a campaign called Rainbow Laces, run by the Stonewall charity,” she explains. “So we've been learning where we can from them, and had gotten to the stage where we were ready to launch a campaign of our own in June. Unfortunately, because of COVID-19, that had to be delayed. But we are now sharing the e-learning module, which went out last week and was really well received.”

Perhaps the best statistical handle available to measure progress, or otherwise, relates the opportunity afforded to female riders. There have been a series of landmark achievements in recent years, both over jumps and on the flat, but Grissell is clear that much still needs to be done.

“Of all the diversity conversations, this is probably the one that has been in the forefront the longest,” she remarks. “As I said, it should be a real positive for the sport that all genders can compete on equal terms and equal pay. However if you look at the detail, female jockeys are not getting the same opportunities as their male counterparts. Obviously there are lots of different theories as to why that might be, and other jurisdictions have been doing different things to address the problem. In France, for instance, they brought in a weight allowance.”

What has heartened Grissell is the traction achieved, in the wider media, by such breakthroughs as have been made. None was more startling, perhaps, than the heartwarming tale of Khadijah Mellah. Yes, the race she won at Goodwood last summer was a charity event and not part of the main program. But the exposure the teenager gained for the sport, as a hijab-wearing novice rider from a deprived London neighborhood, was of Frankel proportions.

“That was a huge story for racing, that went far beyond anyone's imagination,” Grissell recalls. “It reached different communities all round the world. And, in fact, throughout last year we had some really positive stories hitting the front pages, outside the racing bubble, and the majority celebrated our diverse participants. We had [jockey] Bryony Frost and [trainer] Emma Lavelle, with Andrew Gemmell [Paisley Park's owner, who was born blind], winning in that 'golden hour' at Cheltenham Festival. We had Hollie Doyle breaking the record [for most British winners ridden by a female in a year]. And we've just had Hayley Turner winning at Royal Ascot again, and Hollie too.

“In the current climate, we know that women's sport is growing faster than ever and racing has a story to tell as part of that. Of course, we hope there will come a time when it won't be a story anymore. That's where we want to get to, but at the moment it's an opportunity that must not be missed.”

But there are twin fronts to fight here: in terms of both internal and external perceptions. The BHA diversity mission statement is emphatic: “Racing is for everyone. We want all individuals to feel free to be themselves without fear of discrimination or harassment.” But there's a slight chicken-and-egg quality to these wholesome intentions. Only when that becomes axiomatically the case will it become, well, axiomatically the case.

Inevitably, Grissell has experienced setbacks. But there have been uplifting moments, also, when she feels that the message is really getting through. Prejudice works both ways, after all. The whole point is not to make up your mind about people in advance. Sure enough, Grissell has sometimes been pleasantly surprised by the receptivity of people who might be presumed reactionary; albeit occasionally the reverse has, of course, also been true.

“People will surprise you,” Grissell says. “I've had many conversations with people you might put in a certain box and they haven't needed persuading at all. Though sometimes I can't believe the things that come out of someone's mouth! We should remember that everyone's different, and everyone's experience is different. The most encouraging thing is to receive emails from people in the sport saying how fantastic it is, that the industry is waking up to this; that they can now really feel included in their workplace. Because the things we're talking about, to individuals, can be genuinely life-changing.

“The most discouraging thing, on the other hand, is if we try and share something and it gets stalled; gets put in the 'too difficult' pile. But that's part of our role: to change attitudes, to share the understanding why this is so important for racing. Especially now, obviously. As with all sports, and all industries, this is a very difficult time for many. And we have to do everything we can to help.”