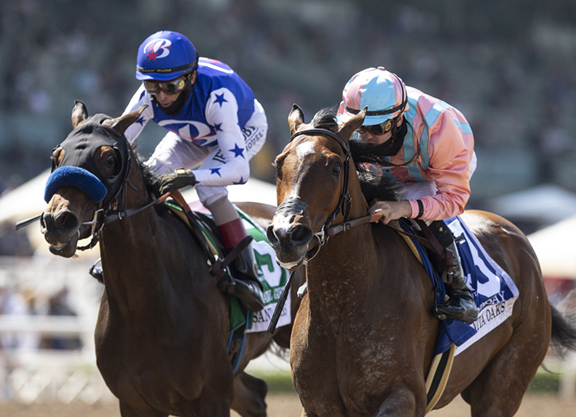 Stepping up into graded company fresh off a debut maiden victory over six furlongs, SOOTHSAY (f, 3, Distorted Humor–Spellbound, by Bernardini) was given a tremendous ride by leading jockey Flavien Prat, met the late-stretch bid of favored Beautiful Gift (Medaglia d'Oro), and went on to a gutsy victory in Saturday's GII Santa Anita Oaks in Arcadia. While Beautiful Gift and Moraz (Empire Maker) took the bulk of the betting and battled up front in a rematch of the GIII Santa Ysabel S., Soothsay tracked those two from behind. The opening quarter of :24.34 and the half in :49.04 passed uneventfully until Soothsay suddenly made a bold move, catching a hole at the rail and surging through in an instant to seize the advantage. Moraz and Beautiful Gift made a line of three turning for home, but Moraz was the first beaten, leaving her two rivals to settle it. Soothsay had a half-length on Beautiful Gift three-quarters from home and held sway despite the pressure on the outside. Beautiful Gift dogged her all the way to the wire, but the less-experienced Soothsay would not be denied. Prat gave her two right-handed reminders in early stretch and vigorously hand rode her the rest of the way home to secure a half-length win. The field had been reduced to four after the Saturday morning scratch of Doug O'Neill's longshot Brilliant Cut (Speightstown).

“We expected a lot of her from the first start and from that start until now, she just grew up,” said Hall of Famer Richard Mandella. “You kind of see it happening. Otherwise, we wouldn't do something like this. If you watched her last workout, you could see how serious she was. We'll see about the [GI Kentucky] Oaks. We asked a lot of her to do this, so we'll make sure we pare back whatever we need.”

Soothsay received 100 qualifying points toward the Kentucky Oaks with the Santa Anita win.

The Santa Anita Oaks was only Soothsay's second lifetime start and her first with any distance. In a case of deja vu, Soothsay followed the hoofprints of Mandella's Paradise Woods (Union Rags), who, in 2017, broke her maiden in a sprint and went straight to victory in the Santa Anita Oaks. That filly would become a MGISW and bank over $1 million. Soothsay bulleted Feb. 19 with five furlongs in :59 2/5 (1/32), then debuted a week later with a sound win over this track at six furlongs. She got her second bullet of the year Mar. 26–six panels in 1:11 2/5 (1/8)–just over a week before the Oaks.

Veteran sire Distorted Humor is responsible for Soothsay and 159 other black-type winners. Soothsay marks the 28-year-old WinStar sire's 70th graded winner. While his progeny have won all three Classics and have won or placed in a number of Breeders' Cup events, he has yet to have a winner of the Kentucky Oaks. Like Distorted Humor, Soothsay's dam, Spellbound, doesn't lack quality. She won the 2014 GII La Canada S. for Mandella and is by stellar broodmare sire Bernardini, who counts Soothsay as his 48th stakes winner out of a daughter. Spellbound, a half to MGSW Kid Cruz (Lemon Drop Kid), hails from the same family as 2018 Broodmare of the Year Stage Magic (Ghostzapper) and $4.4-million yearling Shah Jehan (Mr. Prospector). She has a 2020 filly by More Than Ready and delivered a Mar. 11 colt by Street Sense.