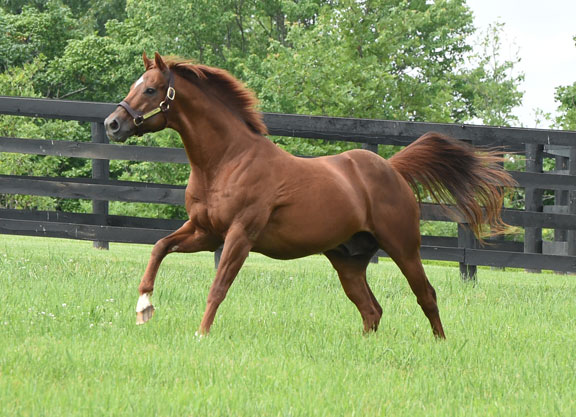 Distorted Humor (Forty Niner–Danzig's Beauty, by Danzig), sire of 2003 GI Kentucky Derby and GI Preakness S. hero Funny Cide from his first crop and an additional 17 Grade I/Group 1 winners to date, was pensioned from stud duty by WinStar Farm Monday at the age of 28. WinStar also announced it is pensioning stalwart Congrats (A.P. Indy–Praise, by Mr. Prospector) at the age of 21.

“We all owe Distorted Humor a debt of gratitude for all he has done for WinStar Farm, my family, and the many breeders who supported him from his humble beginnings,” said Elliott Walden, WinStar's president, CEO, and racing manager. “He will be missed in the breeding shed this year, but we are so grateful that we can continue to see him at WinStar for the foreseeable future. What a horse.”

The late Charles Nuckols, Jr. and Sons bred the chestnut son of 2-year-old champion Forty Niner from Danzig's Beauty, a Grade II winner and runner-up in the 2000 GI Acorn S. at Belmont Park. After winning his first start by a commanding 5 1/2 lengths with trainer Phil Gleaves, Prestonwood Farms purchased half of the colt and turned him over to Prestonwood trainer Elliott Walden.

Winner of Saratoga's Screen King S. (later Amsterdam S.) in August 1996, Distorted Humor was third to that year's GI Met Mile hero Honour and Glory (Relaunch) in the GII King's Bishop S. before finishing runner-up in the GII Jerome H. at Belmont and in the GII Fayette S. at Keeneland. Victorious in the GIII Salvator Mile H. at Monmouth in the summer of 1997, he celebrated his best year at the races as a 5-year-old, taking out the GII Commonwealth Breeders' Cup, the GII Churchill Downs H. and GIII Ack Ack S. before closing out his career with a troubled third in the GI Cigar Mile H. He retired to Prestonwood with a record of 8-5-3 from 23 starts and earnings of $769,964.

Distorted Humor stood his first year at stud in 1999 for a fee of $10,000 and became the leading first-crop sire of 2002 by earnings, owing largely to the exploits of the WinStar-owned and Walden-trained Awesome Humor, who was perfect in four juvenile appearances, including a 2 3/4-length victory in the GI Spinaway S. at Saratoga.

In 2000, Kenny Troutt and Bill Casner purchased the farm from the Preston brothers and renamed it WinStar Farm. Among the stallion's second crop was a New York-bred son of Belle's Good Cide (Slewacide) named Funny Cide. A $22,000 purchase out of the 2001 Fasig-Tipton New York-Bred yearling sale by Sackatoga Stable, the chestnut defeated his state-bred peers in three appearances at two before making a successful transition to open company in 2003. Runner-up to Empire Maker (Unbridled) in the GI Wood Memorial S., the 'gutsy gelding' turned the tables on his more fashionably bred foe in the 'Run for the Roses' scoring by 1 3/4 lengths before tacking on a 9 3/4-length romp at Old Hilltop. The even-money choice to become racing's first Triple Crown winner in a quarter-century, Funny Cide raced prominently over a sloppy Belmont main track, but gave way in the final furlong, ultimately settling for third to Empire Maker. Distorted Humor, who served mares at $20,000 in 2000, was runner-up among second-crop sires.

Distorted Humor sired two Grade I winners in each of those first two crops and sired at least one top-level winner from each of his first five North American crops. Commentator (2001) was a two-time winner of the prestigious of the GI Whitney H., while Flower Alley (2002) defeated the best of his generation in the 2005 GI Travers S. at the Spa. Hystericalady (2003) was victorious in the GI Humana Distaff H. and went within a whisker of winning the 2007 GI Breeders' Cup Distaff, while Bit of Whimsy (2004) took out the time-honored GI Queen Elizabeth II Challenge Cup for Funny Cide's trainer Barclay Tagg. WinStar's Drosselmeyer (2007) became his sire's second Classic winner when upsetting the 2010 GI Belmont S. in the WinStar colors and added a season-ending success from the clouds in the GI Breeders' Cup Classic at Churchill Downs in 2011. Distorted Humor's other domestic Grade I winners include Fourty Niners Son (Clement Hirsch Turf Championship), Any Given Saturday (Haskell Invitational), Boisterous (Man o'War S.), Jimmy Creed (Malibu S.), Joking (Vosburgh S.) and Restless Rider (Darley Alcibiades S.). Distorted Humor sired four international Group 1 winners: Pathfork (National S.) and Cursory Glance (Moyglare Stud S.) in Ireland; Aesop's Fables (Prix Jean Prat) in France; and Rinky Dink (Aus) (South Australian Oaks) from limited crops in Australia.

Overall, Distorted Humor has sired 1,147 winners to date (76.3% winners to runners), among them 163 black-type winners and 70 at the graded/group level in eight different jurisdictions, including England, United Arab Emirates and Turkey in addition to those previously mentioned.

Only a Horse of the Year season from Saint Ballado's son Saint Liam denied Distorted Humor a general sires' title in 2005 and he was among the top 10 sires from 2007-2010 before breaking through in 2011, owing to the exploits of Drosselmeyer. Distorted Humor stood for a six-figure stud fee from the mid-2000s, peaking at $300,000 in 2008. He commanded $50,000 at WinStar in 2020 before standing for an undisclosed fee this year.

Daughters of Distorted Humor have become important producers, having accounted for 115 black-type winners, 52 at the graded/group level and 19 to succeed at Grade I/Group 1 level. Arrogate (Unbridled's Song), a three-time top-level scorer in this country, added a spectacular victory in the G1 Dubai World Cup in 2017, and Distorted Humor is also the broodmare sire of Constitution (Tapit), the leading first-crop sire of 2019 by stakes winners and graded winners who also stands at WinStar.

Congrats, a top 10 sire by winners for the last six years (top five in three of those years) has been a perennial producer of top-class runners during his remarkably consistent career at stud and is once again among the leading sires of winners in 2021.

A Grade II winner on the track and graded stakes-placed in four straight seasons from three to six, the bay entered stud in Florida at Cloverleaf Farms in 2007 before moving to Vinery from 2008-12 and calling WinStar home from 2013 on.

This year, Congrats is represented by 122 winners and boasts progeny earnings of $4,843,399. His top runner this season is two-time graded stakes winner Last Judgment, winner of the GIII Pimlico Special Match Series S. at Pimlico and the GIII Challenger Stakes S. at Tampa Bay Downs.

The only champion freshman sire by the legendary sire of sires, A.P. Indy, Congrats is the sire of Grade I winners Turbulent Descent, Haveyougoneaway, Wickedly Perfect, and Emma's Encore. He has total progeny earnings of $71,982,417 and is the sire of 44 black-type winners. He also has sired 12 graded stakes winners and is being retired to John Sykes' Woodford Thoroughbreds in Reddick, Fla.

“Congrats helped me get started in this business and has meant so much to Woodford Thoroughbreds,” said John Sykes. “We are happy to be bringing him home for his retirement.”