Diego Herrera: A Prepared Young Man is Worth Two 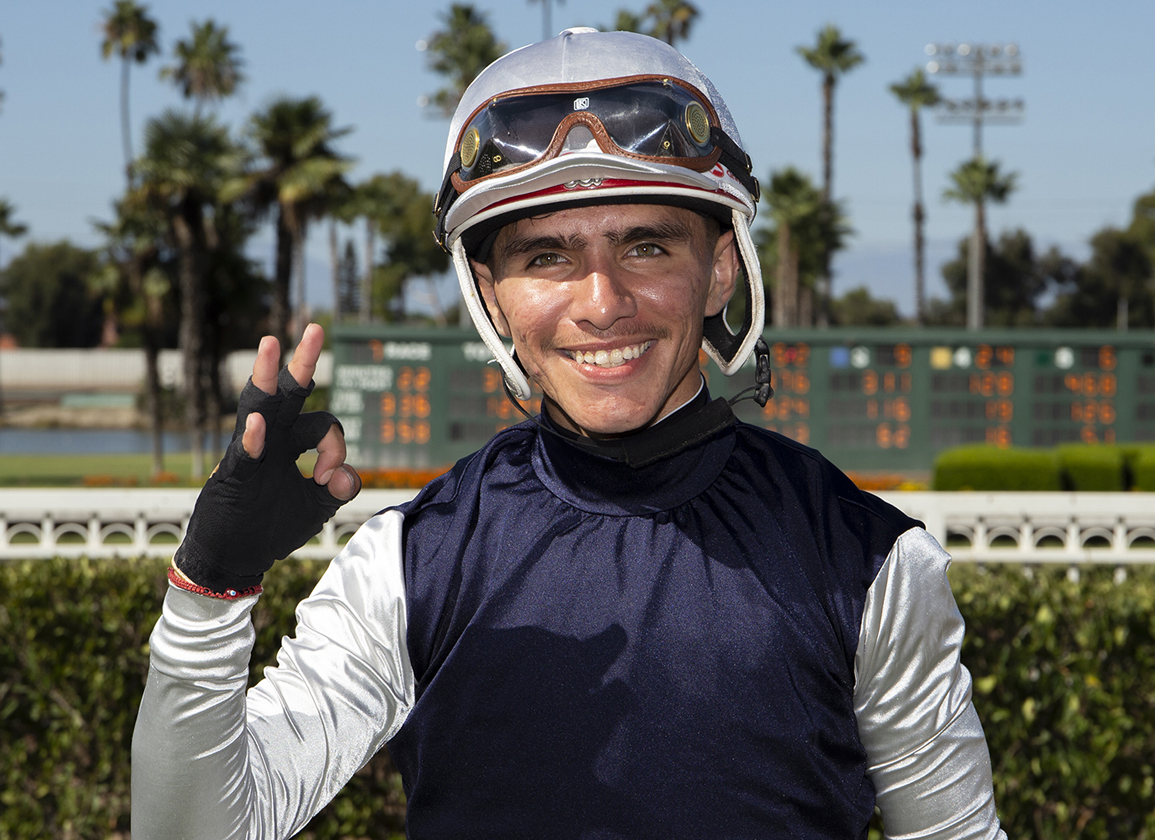 Cauthen, Ouzts, Bourque, Parker, Migliore, Delahoussaye and Baze all have one thing in common–perhaps several, if we are splitting hairs.

They all started from the ground up: mucking stalls, grooming, walking hots. All too often nowadays, young upstarts are appearing and eschewing the shank for the helmet, goggles and jock's license, which is why it's so refreshing to spend some time with apprentice Diego Herrera who, at just 17, is wise beyond his years.

Herrera is currently eighth in the jockey standings at the Santa Anita meet with six winners.

“Just come to Los Al, I will be there all day,” he said. All day? What the hell is he doing there “all day”? Santa Anita is closed Tuesdays to workers so most jockeys take the day off.

Intrigued, I hopped in my car and headed down the 605 to Cypress, California. I arrived about 10:30 a.m., only to be greeted by the gate crew on their way out after finishing up the morning's trials, or “training races.” One horse was left on the track with a jockey riding legs-length and smiling as he walked off the track toward me. It was Herrera.

Once off his mount and at the barn, one thing stood out: there were no fewer than four wheelchairs in various states of disrepair, one of them housing a grinning Oscar Andrade, Sr. and his dog, Fendi. “He's hard on them,” said his wife, Elena, with a giggle.

Andrade was a very successful Quarter Horse jockey who once mimicked Frankie Dettori by winning seven races on a single card at Los Alamitos, a record that still stands today. His son, Oscar, Jr., was just 10 days old when Andrade was paralyzed in a spill in 2001.

It was evident that the Andrade barn was more than just horses. Herrera explained the father-son dynamic between himself and Andrade, who, funnily enough, is no relation at all.

“He's like a father to me, but also has been very hard on me. He has always told me, give 110% and never look back. That's what he did and he has no regrets.”

Herrera remembers asking, “Why? I'm going to be riding with stirrups!” To which Andrade simply replied, “You never know.”

This invaluable lesson was evident Jan. 14 in the eighth race at Santa Anita, when he was riding a longshot at a mile on the grass. Herrera's stirrup became unbuckled, he lost an iron, kicked out the other one and went on to finish second aboard the Philip Oviedo-trained Explain This Audit (Vancouver {Aus}).

“That really, really opened my eyes,” said Herrera. “I thought after, 'Okay! That's why he did that.'”

Herrera was born in Inglewood, a stone's throw from Hollywood Park. His father owned some Quarter Horses and Herrera as a young boy would spend many days at Los Alamitos. When Herrera wasn't with his father, he would spend time “training” his pony, Sparky, a tiny bundle of fur, through the riverbeds of Los Angeles County.

According to Herrera, Sparky won match races from Long Beach to as far away as Idaho, carrying his flyweight 40-pound, 8-year-old rider, Herrera. It was here the racing bug took off. 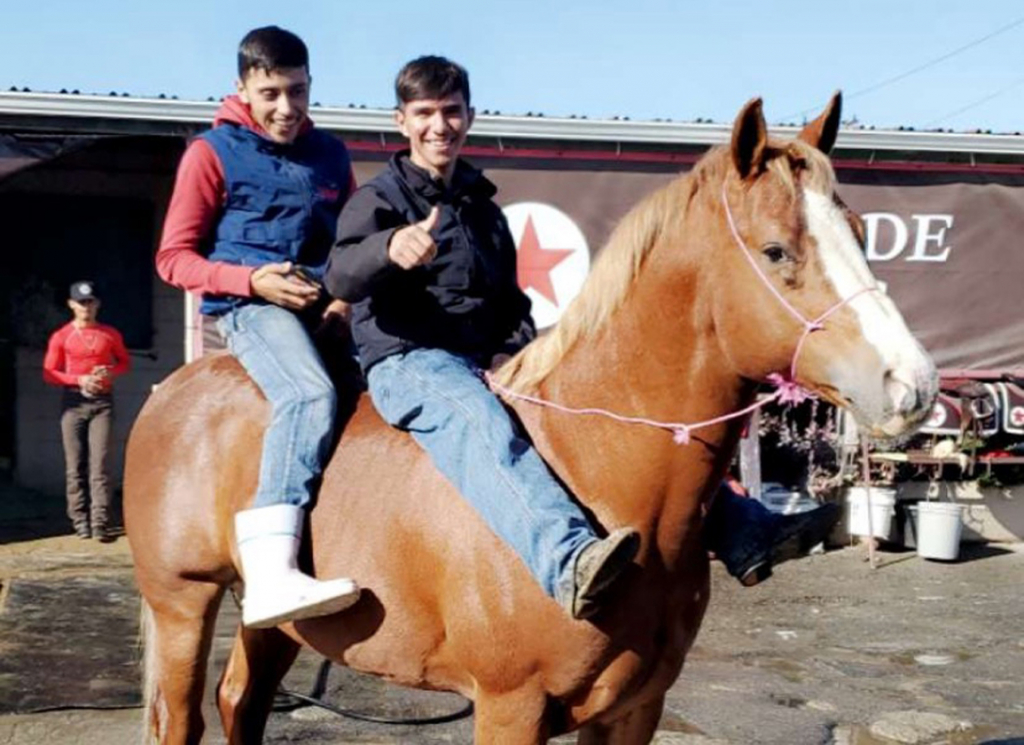 Back at Los Alamitos, he made fast friends with Andrade, Jr. The two of them would watch the races on the roof together, race each other on hay bales and even sneak into the jock's room to practice on the Equicizer. In between the fun and games, the two boys would be put to work by Andrade's mother and Quarter Horse trainer Elena, mucking stalls, raking the shedrow, anything that would earn them a leg up.

It was in the Andrade barn that Herrera felt he finally fit in.

“You know, as a kid I didn't really have a lot of friends,” said Herrera. “I talk to everybody but I didn't consider anybody else a real friend. But when I met Oscar, he showed me what that horseman feel is. You don't make relationships with people; you make them with horses.”

As Herrera and Andrade, Jr. grew up, they only had one thing on their mind and that was to go fast. But to go fast meant they would have to put the work in, as Elena Andrade explained: “Our barn, the deal is you have to learn the fundamentals. The foundation. The inside of a horse from the ground up, not just get on a horse and go fast.”

Herrera never intended to be a Thoroughbred jockey, thinking more along the lines of Quarter Horse pilots G. R. Carter and Cody Jensen. But it was at the behest of trainer Angela Aquino–sister of Elena–for Herrera to give Thoroughbreds a go. He was light, could do the weight, so why not?

It didn't take long for Herrera to start winning the regular nighttime 1,000-yard races and 4 1/2-furlong races for Thoroughbreds.

When he rode his first double, Scott Craigmyle–director of racing operations at Los Al–got on the phone, and just like that, he was off to Santa Anita, first under the tutelage of Vince DeGregory, who has handled the books of such luminaries as Shoemaker, Cordero and Pincay, and now under Derek Lawson, who previously managed Flavien Prat. As for his Quarter Horse business, that is handled by April Ward, who books all his mounts.

So, where did his Puritan work ethic come from?

Herrera said he grew up watching his father toil with his landscaping business day and night. “He wants to strive to be a better person in this world.” His father never went to school but always told his son, “A prepared young man is worth two.” 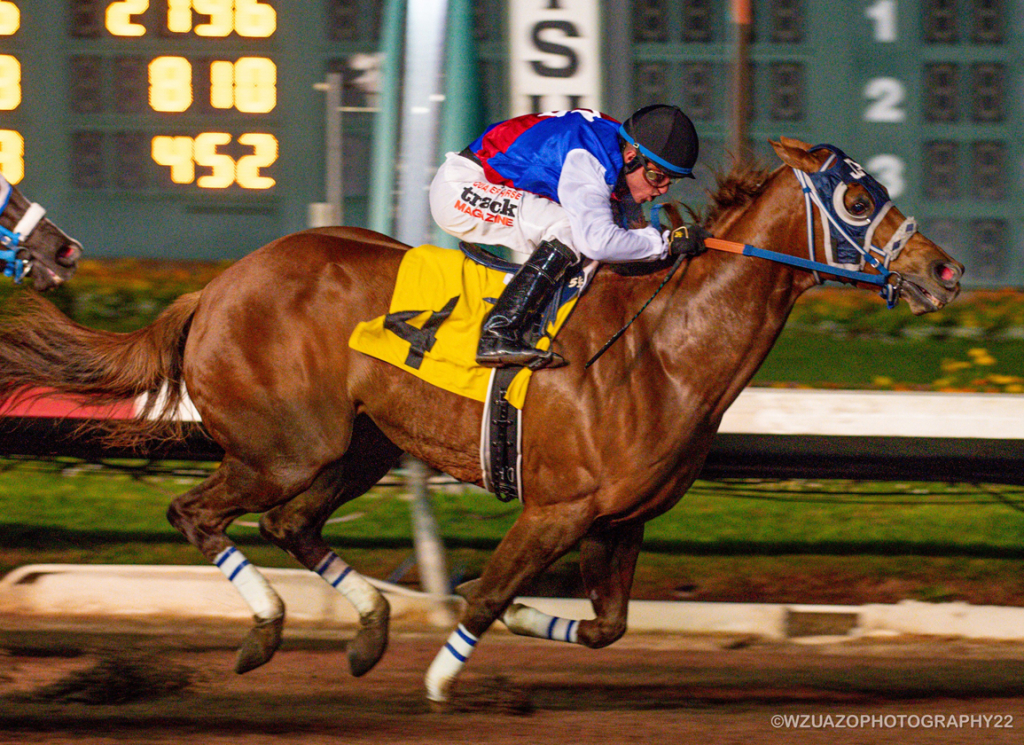 A pick-up mount on the favorite in a Grade I Quarter Horse event was not something the teenager was expecting the night of Jan. 2. Herrera recalled having 13 mounts already that day, five of them at Santa Anita. He was getting ready to go home when he got a call in the jock's room to pick up a mount.

“It was crazy,” said an animated Herrera. “I didn't know she was the favorite, and when I looked up, I saw she was and I was like, 'Okay, no pressure.'”

The horse in question was Kiss Thru Fire, the defending champ in the GI Charger Bar H., contested at 400 yards. Herrera called it a surreal moment as he hit the line half a length to the good.

Herrera picked up his first turf win going two turns on the Santa Anita sod the very next day.

So, what's next for the teen from Inglewood?

“I'm just going to keep working hard and learning every day,” he said, and then added, “A nomination for an Eclipse Award would be nice.”

Herrera's bug is over in April, but that won't stop this lad dreaming his dreams, now longer than 440 yards.