Dialed In Tapping the Right Numbers 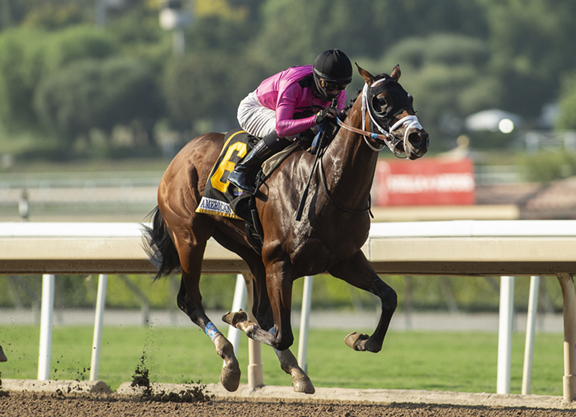 Get Her Number won the American Pharoah S. Sept. 26 | Benoit

We often talk of stallions who have had to earn their stripes. And there's no doubt that Dialed In has uncomplainingly completed every drill necessary to get his first Grade I insignia stitched onto his uniform, by Get Her Number in the American Pharoah S. at Santa Anita a few days ago.

By the time the son of Mineshaft set up shop in 2013, his qualifications as favorite for the 2011 Derby had rather faded from memory. He had run down Shackleford (Forestry) in the GI Florida Derby, but their contrasting running styles invited very different fortunes in the Classics. Both at Churchill and in the GI Preakness S., Dialed In was squeezed leaving the gate and was still last on the far turn, closing too late to manage better than eighth and fourth, respectively; Shackleford, always in the van, meanwhile boxed on for fourth and first.

Unfortunately Dialed In was then sidelined, for the removal of a chip, and an attempt to regroup at four backfired when he surfaced only for an allowance defeat back at Gulfstream in the spring. By the time he came to Darby Dan, then, a fee no higher than $7,500 was required to help draw breeders' attention. Shackleford, in contrast, had meanwhile kept his name in lights sufficiently to open at $20,000. To Honor and Serve (Bernardini), who had struggled into third in the Florida Derby, had done enough since to command $30,000; while two leading Classic protagonists of the next crop, Bodemeister (Empire Maker) and Union Rags (Dixie Union), started out at $30,000 and $35,000, respectively.

“When he came to stud he had not been in the news since that spring, so we started him at what we thought a good value price for breeders,” says Ryan Norton, stallion director at Darby Dan. “But this is a really, really good-looking, drop-dead gorgeous horse, so once we were able to bring him out and show him to people, seasons were sold immediately. He might have been a forgotten horse on the racetrack but once people got the chance to see him, physically, they were very excited to breed to him that first year.”

Dialed In's physical charisma had first been measured as a $475,000 Saratoga yearling, picked out by Robert LaPenta's Whitehorse Stable. That qualified him as the most expensive of the crop for his sire.

And Dialed In matched looks with deeds, edging out Union Rags for the 2016 freshman's championship by prize money; he also had most wins, and only just missed by individual winners (one behind Maclean's Music). And he did so from only 40 starters, compared with 53, 57 and 56 for the next three in the purse table.

“Union Rags, with whom he was back-and-forth to become champion freshman sire, started at $35,000–so with a whole different league of mares,” Norton notes. “But Dialed In was able to come on through and beat those heavy hitters. If you look at the CPI [Class Performance Index], he definitely moves up his mares.”

Dialed In was rewarded with a hike to $15,000 and his 2017 book soared from 105 mares to 231, behind only Into Mischief nationally. Get Her Number is one of its graduates, making his breakthrough success appear especially auspicious. Within a week, moreover, another member of that bumper crop, Super Stock, added another Grade I podium when third in the Claiborne Breeders' Futurity at Keeneland.

Though his next two books comprised another 284 mares, Dialed In was this year given a sensible trim from $25,000 to $20,000 and duly maintained traffic at 143. With his books duly strengthening, at the very point where most young sires tend to falter, those breeders who jump aboard now can hope to catch a following wind.

That's especially true given the way Dialed In's stock is tending to thrive with maturity. For all the precocity imparted to secure a freshman's championship, his premier achievers have been no less conspicuous for competitive longevity. Dialed In's first flagbearer, Gunnevera, won the GII Saratoga Special S. but was still holding his own at the highest level even as a 5-year-old. (And Gunnevera's dam, note, made only one start.) Runner-up in such prestigious Grade I races as the Travers, Woodward and Breeders' Cup Classic, Gunnevera hauled over $5.5 million. Another of Dialed In's first foals, six-time stakes winner Chalon, is still going strong and himself now stands cents short of millionaire status.

“Obviously Dialed In throws a very sound horse,” Norton remarks. “They keep running. They start at two, they may not always be the most precocious, but they run well; and then they just seem to get better and better as time goes on. And they're sound enough to keep up the momentum.”

That's an unsurprising profile, of course, in a son of Mineshaft. But remember that Dialed In won his only juvenile start (albeit not until November) and was sufficiently natural a runner to win the GIII Holy Bull S. on his second appearance.

Get Her Number demonstrates that his sire was still working with limited material even as champion freshman. His dam Fancier (Bernstein) did win three races, but we're talking about a $5,000 tag at Evangeline Downs, and she was offloaded to William Nicks at Keeneland last November for just $1,300.

To be fair, Get Her Number is only Fancier's second foal. If her siblings were bereft of black type, few were by sires of any distinction; and their dam's half-brother Diffident (Fr) (Nureyev), in winning a couple of Group sprints in Europe, decorated a highly accomplished turf family. Third dam Shy Princess (Irish River {Fr}), a half-sister to GI Breeders' Cup Mile winner Opening Verse (The Minstrel), was runner-up in the G1 Prix Morny and can be found in the same slot in the pedigree of G1 St James's Palace S. winner Zafeen (Fr) (Zafonic). Further back, this is also the family of champion Heavenly Cause (Grey Dawn) and the splendid Maryland patriarch Two Punch (Mr. Prospector).

So there are some embers of quality here. It just reflects well on Dialed In that he has managed to stoke them up after they had appeared to go so cold.

The most obvious feature of Get Her Number's pedigree is the 3×3 replication of Storm Cat: Fancier is by his son Bernstein, while he is also damsire of Dialed In. Storm Cat, of course, is a famously versatile influence, champion sire either side of the Atlantic. And Get Her Number emulated the best of his maternal family by winning on turf, on debut in a Del Mar sprint, before only just being squeezed out in a blanket stakes finish over a mile next time. But Peter Miller–who bought the filly, bred by Peter and Brenda Roberston, for $45,000 from the Wavertree consignment at the OBS Spring 2-Year-Old Sale–then had the inspiration of switching him to dirt for the American Pharoah. Get Her Number picked up the phone, and got himself an invitation to the Breeders' Cup.

Dialed In himself represents a familiar blend of Secretariat's trademark influences as a broodmare sire, with a celebrated grandsire and damsire respectively out of Weekend Surprise and Terlingua. Intriguingly, Terlingua is out of a Crimson Satan mare–and so, too, is Mt. Livermore, the sire of Dialed In's brilliant granddam Eliza, who won the GI Breeders' Cup Juvenile Fillies and the GI Santa Anita Oaks. Crimson Satan must be counted a wholesome influence, his hardy Argentinian roots telling in a champion juvenile who went on to win 18 of 58 starts.

In other words, the genetic palette of Dialed In–the work of W.S. Farish, Madeleine Pickens and Skara Glen Stables–is deeply inlaid with Classic tones. (Besides Eliza, incidentally, Daring Bidder produced a GI Santa Anita Derby winner in Dinard {Strawberry Road}.) That's worth remembering, as his pedigree has been primarily associated with vivid flashes of speed and precocity, notably through his dam, Eliza's daughter Miss Doolittle (Storm Cat), placed in the GII Schuylerville S. in a light career.

Miss Doolittle's eight winners included one other black-type scorer, Broadway Gold (Seeking the Gold), herself since dam of a couple of graded stakes winners including Broadway's Alibi (Vindication), who won the GII Forward Gal by 17 lengths, and, like Eliza, finished runner-up in the GI Kentucky Oaks.

Overall, for sure, there's ample to underpin the way Dialed In is consolidating so well. As Norton says: “You look down and there's a couple of champions in there, a lot of really nice racehorses, and every year there's updates. It's a pedigree that just continues to thrive and produce.”

Whisper it, but there's almost a modest hint of Tapit about Dialed In: their track careers were pretty similar, and their respective sires Mineshaft and Pulpit are both by A.P. Indy out of a Mr. Prospector mare.

He is hardly on the Tapit trajectory just yet. Others in his intake were certainly quicker to their Grade I headliners. But Bodemeister, having produced a Derby winner at the first attempt, is now in Turkey; Shackleford, who started alongside Dialed In at Darby Dan, is in Korea; likewise, To Honor and Serve. Even so, it has proved an above-average group. You have Monomoy Girl's sire Tapizar; Union Rags boldly advancing to $60,000; The Factor making an impressive comeback after his sojourn in Japan. Maclean's Music has shown his own instant Classic success to be no flash in the pan; while both Creative Cause and Get Stormy have established themselves as good value at their level.

To compete so well from such a low base, then, is a tremendous credit to Dialed In. His 18 graded stakes horses put him level with The Factor and only two behind Union Rags; and, with a considerably smaller pool of runners, he has much the highest ratio of such horses to starters (6.8%).

And, as we've seen, reinforcements will now continue pouring through. “We always try to offer value to the breeders out there, so lowered him a bit this year,” Norton says. “That means the numbers are still there; the 100-plus books, every year. His current 2-year-olds were bred when his fee jumped from $7,500 to $15,000, so they're also better mares as well. There's plenty more on the horizon, so hopefully Get Her Number won't be the last Grade I winner out of this crop.”

This story was posted in Shared News and tagged Chris McGrath, Darby Dan, Dialed In, Eliza, Get Her Number, Ryan Norton.